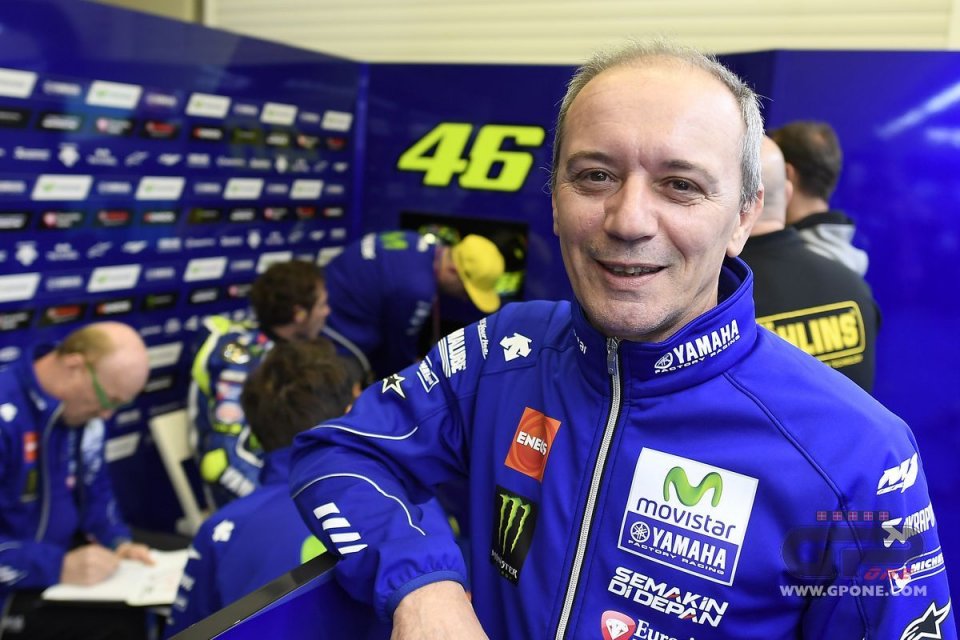 The three-time champion, who achieved 24 wins and 72 podiums during his career, has been working with Rossi since getting to know him during a private test session at Misano riding the new Yamaha R1. Rossi rode a standard version while Luca was on his own, super-prepared bike.

"It was great and I also learned something", said Luca at the time.

Curiosity and a desire to learn are two of a champion’s prerogatives, so it’s not strange to find Cadalora working alongside a 37-year old who never stops improving.

A world champion working for a world champion.
"I must say that Valentino surprised me. Meeting with him was really eye-opening – confesses Cadalora, who often battled it out against other legends in the world championship – I consider him a kind of Frankenstein-rider. He’s focused on the goal just like Eddie Lawson ingenious on and off track like Kevin Schwantz, able to improvise like Wayne Rainey, but also tenacious like Mick Doohan".

You’ve already named five legends, Luca Cadalora, identifying their main characteristics? So what’s yours?
"Umm, well I have a gift – he replies promptly – I watch the riders on track, see how the bikes behave and I can understand where many of the problems they might be having come from.”

Cadalora’s tecnical know-how is legendary in itself. Something he refined during his years with Kanemoto, and perhaps a confirmation of this was Rossi’s reaction when he tested Luca’s R1.

"Rossi too is very prepared, but he leaves certain jobs to others. He’s not an engineer. But he is extremely analytical and able to explain what’s happening on the bike, so that after he talks to you, you know where to work.”

What’s changed on the bikes in the last 30 years?

"The electronics mainly. There’s so much more data to manage; data is a benefit but at the same time it becomes more complicated to set up the bikes.”

We have to ask whether working with Rossi, a demanding rider, is difficult.

"Not at all. I work very well with him. His group of technicians are well prepared and Valentino is always relaxed.”

"I admire him because I think that if, in my day, I had had just a touch of his charisma, I could have perhaps done a lot more, but that’s character for you. If you don’t have it, it’s not something you can get.”

Like courage. A courage that Luca often demonstrated during his career riding the powerful two-strokes

"They were powerful but with a restricted, unpredictable usage – recalls Cadalora  - You couldn’t ride to the limit that you can now, because if you made the slightest error, you woldn’t be able to control it. The tyres were also a lot less evolved. Today’s MotoGP bikes are a lot more enjoyable because they have an incredible engine, but the power is so great that they to are difficult.”