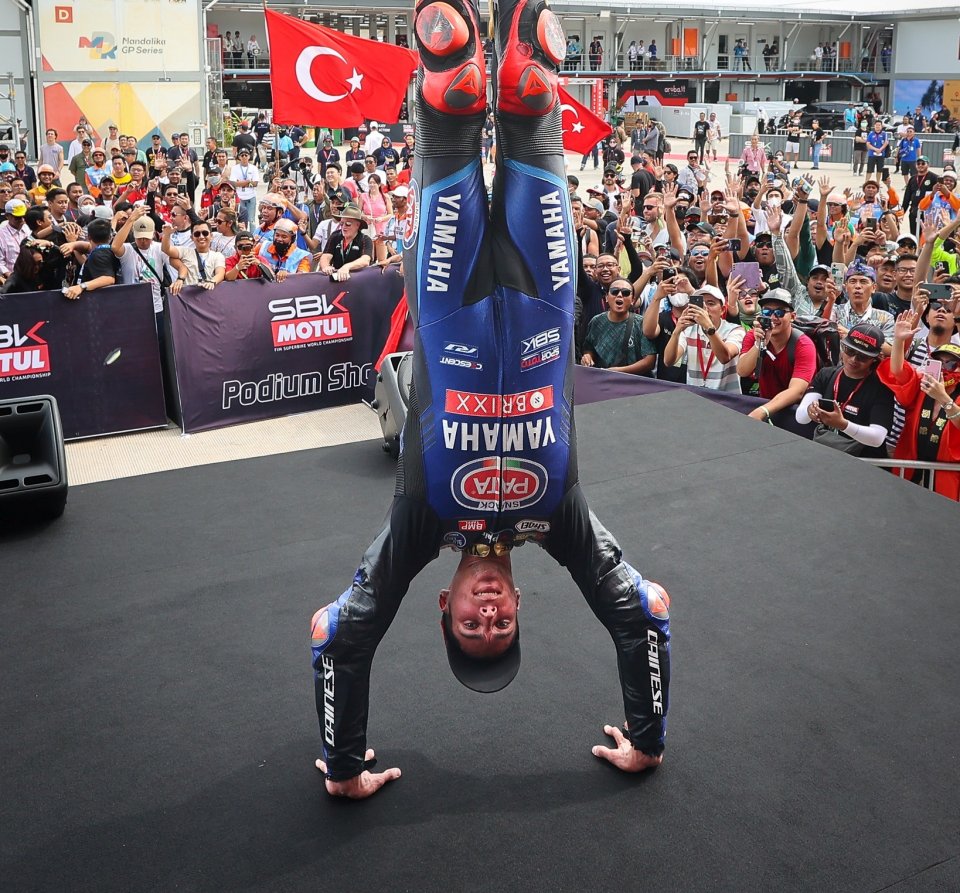 Toprak Razgatlioglu knew very well that he had only one chance in Mandalika to try to keep the world championship open until the Phillip Island round, that is to always win, from Race 1 to Race 2, as well as the Superpole Race. The Turk is for the moment in line with his mission, as he dominated the first fraction after also starting from pole. But an episode that occurred immediately after the race partly ruined the party. On the podium, in fact, Alvaro Bautista celebrated with Prosecco and it bothered the Turk very much.

"I honestly don't know what Alvaro was doing - said Toprak - here we are in an Islamic country. I usually don't like celebrating with Prosecco anyway, I think today he lost respect. After he apologized, but I think that he should have more respect. I like him a lot, but he has to learn to respect everyone. I saw Rea, I asked him if he would celebrate and he said no. He knew how to have respect. I don't want to say more, but more respect is necessary".

"I don't touch alcohol, Alvaro sprinkled Prosecco on me. It's not okay, he didn't respect me. I walked away and he followed me. I don't want to add anything else, I just ask for respect".

Let's talk about today's race. At one point you also had a bit of a scare.

"The bike simply started to slide too much, so I avoided opening the throttle too wide. I remembered Marquez's accident, I was close to having a bad crash. Better be careful. At turn 6 I hit the kerb, I took the wrong line at that moment and afterwards I made a mistake to recover. After that I saw that Alvaro had come near. The only strategy today was to stay on the trajectory because as soon as you put the wheels out off the line there was zero grip. "

Today was a dull race, maybe it's difficult to overtake here?

"Overtaking today has never been a problem, I knew that in some points it was easy to overtake here. But in any case it is better to stay in front, even if alone. I didn't have much fun, I would say that I was also bored because I was alone for a long time. But I think tomorrow in the Superpole Race there will be some good battles. In the first laps today I avoided pushing too hard, I just wanted to get the tyres up to temperature. I knew that after ten laps at most I would suffer, so I just tried saving the tyres, but in the end the pace wasn't bad because we were lapping in 1’33. It wasn't an easy race for me as it was for the others, the conditions were prohibitive, it was very hot".

How did you manage to improve so much in this second half of the season?

"I just think I'm improving one step at a time. Because this year the Ducati has been very strong, like Alvaro, in all the races. My bike isn't very fast on the straight, but I've improved a lot in the corners. Now I ride much better than last year and that's the only aspect I had to improve on, because with a Ducati so strong on the straight I needed to recover in the corners. "

With today's times you would also have fought with the MotoGP bikes.

"Tomorrow I won’t start in a good position in the Superpole Race, but I will try. I would win the Superpole Race in MotoGP even with an SBK! I don't really think I can keep that pace throughout the race. In any case when MotoGP raced here, maybe there was less grip. The track is better today, but the bike is sliding everywhere."

The world championship is still open.

"I knew I had only one chance, that is to win all the races. In Australia the Ducati is very fast, Alvaro was also with the MotoGP. I know that this is the case, so I tried to give everything here. Tomorrow it’ll be a good fight. I'll give everything. "