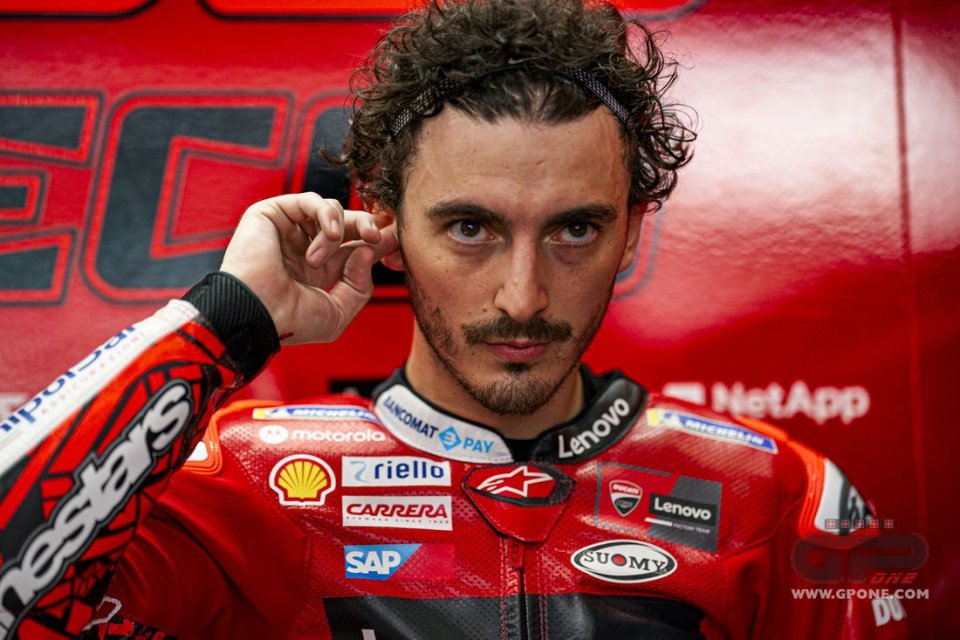 On one of the worst days for Bagnaia, there are at least two positives. The first is that he won the BMW for best rider in qualifying during the year ("It's already something ..."), the other is that there are those who did worse than him. Quartararo and Espargarò, his rivals for the title, who will start behind him and who had many problems. Misery loves company one could say, but today in Sepang none of them were happy, especially Pecco.

Was it one of the worst Saturdays of the whole year?

“It was more difficult at the beginning of the season, when I was trying to push and I was slow without crashing. Today, the only good thing was FP4. And Q1 obviously. But FP4 because I was very constant, very fast with very used rear tyre. Then I just did everything to try to ruin the day.”

Where do we start from?

“This morning I was too upset, too nervous with what happened with Franco. I was a bit angry. But after an hour, I said, ‘it's something that can happen to everybody’. So I'm human, and I'm starting to feel a bit of pressure, but I think it's normal.”

“I wasn't smart enough to understand that my pace was good enough to be on the front row without forcing too much, and I forced a lot in Turn 4, and I lost the front. I have to learn from these things. However, this is a track that offers many possibilities to overtake and the Ducati engine will help us ”.

Better to make a mistake today than tomorrow ...

“Yesterday I just made a mistake not to use the soft tyre in FP1, but it was already very used and I would have struggled to get a good performance anyway. Today, unconsciously, I started to feel that something in your head that leads you to get more nervous, to be less lucid in certain situations. It will be up to me to try to understand what to do tomorrow to stay calm, I can count on my team who are able to make me relax ”.

Quartararo and Espargarò also made mistakes.

“For sure, their day was even worse than mine because with the crash in FP4 Fabio broke a finger, and I want just to say that I'm sorry for him, because I think that in this moment, the bad luck he is having is too much, he doesn't deserve it. And thinking about Aleix, I think that sincerely, he's struggling a lot from the start of the weekend. But all three, we didn't have a really good day.”

Of the three, however, do you feel you are the best placed for the race?

“In this situation, yes, because I can count on my engine and on the work done in FP4 on the tyres. I'm in good shape ”.

Do you think the other Ducatis will aim for victory tomorrow or will they wait for you?

“I think if they have the possibility, they will try to win. Like always. Like all the year. So maybe tomorrow won't be the day to have some team orders, but let's see. It will be important to be in the front, but we have to be smart, first of all.”

Have you talked to Morbidelli?

“He apologized to me and I replied that these things can happen. I reacted a little too badly at first because I was angry, certain things are starting to happen a little too often. As well as the fact that many riders are waiting for a tow, as happens in Moto3. In qualifying I had 7 bikes behind me, it's not against any rules, but it's starting to become a problem ”.

Marquez is always looking for a tow from you. Did it affect your nervousness?

“In qualifying I crashed because I got excited on my own after the first sector and I overdid it. It wasn't a question of speed, the problem was that the bike got a bit sideways, I had to do a different manoeuvre than usual, and I lost the front. The nervousness, however, was caused by Franco and Fabio, like many other riders, who entered the track without looking behind and without pushing. Morbidelli was more striking, but Quartararo did the exact same thing. There and then I was pissed off.”

Did Quartararo also deserve to be penalized?

“I reported what happened to the team and then they decided. For Fabio it went so badly afterwards, so it was OK like that”.

Is there still a chance to win the championship tomorrow?

“I will try to do the best possible, and if I will be able to close the things tomorrow, I'm happy to do it. But it's not good for me to be forced on that. To think just, I have to close it. Because if I gain more points tomorrow, it's just as good, because then we will arrive in Valencia, for sure with more pressure, but a bit more gap. It will be important to be smart tomorrow.”

Does the rain worry you?

“It would be more difficult. Yesterday I was competitive in those conditions, but the race is a completely different story. I have to think that all conditions are good for us ”.

How are you going to spend this night?

“In the meantime, I’ll go and get me a massage at the Clinica Mobile, so we'll talk bullshit as usual. Last Saturday they suggested to me to watch a comedy movie, 'The Interview', and I laughed like crazy all evening. There is my girlfriend Domizia and we will have a lot of laps about the face that she did in Q1 ".

Even your face when they told you about Martin's time was not bad ...

(laughs) “Jorge was incredible, he proved to be a top rider. When I saw his time of 1’58"0 I thought there was a mistake! He was even more incredible on the second attempt, it's true that I was up on that time when I crashed, but it's one thing to make one sector and another all of them. Jorge was phenomenal ”.