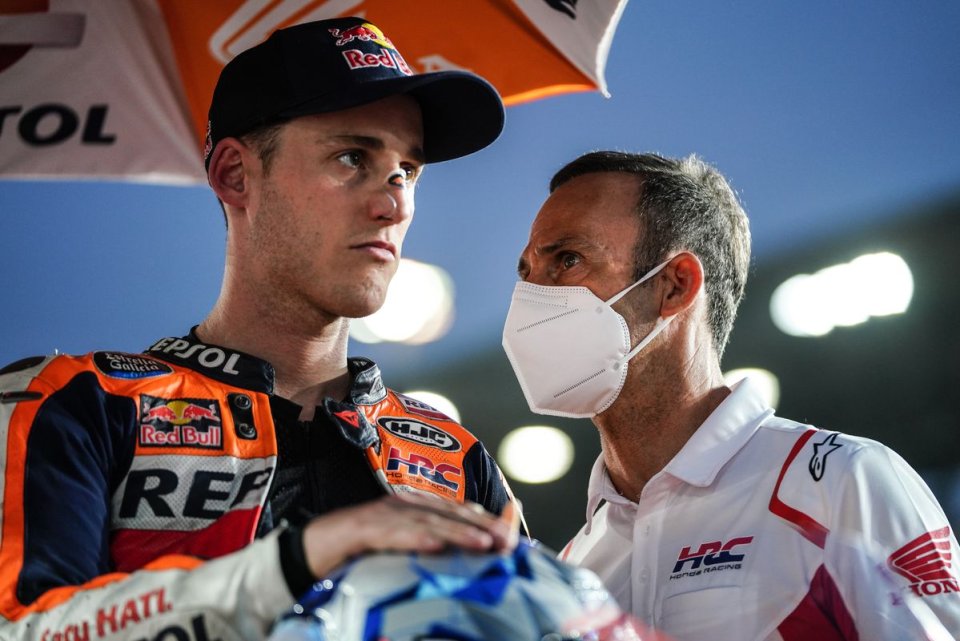 Let’s face it, the Sachsenring GP was the all-time rock bottom reached by Honda in the world championship.

Pol Espargaró and Álex Márquez failed to conclude the race for various reasons and Stefan Bradl finished 16th – the last of those to take the chequered flag - The eight-time world champion's replacement finishing more than 52 seconds behind winner Fabio Quartararo .

It’s a result that goes way beyond the absence of eight-time world champion Marc Marquez, still recovering from a fourth operation on his right arm since the accident two years ago in Jerez.

If you look back at the past, Honda had scored points in 633 consecutive races in the premier class. Such a situation had never has arisen since 1982, so it has taken 40 years to relive a nightmare of this level.

“I don’t know about statistics; I just know that we are not in the correct situation at the moment and we have to completely change this. We have done it many times in the past, we are Honda!” said Alberto Puig with his usual tone, refusing to throw in the towel on behalf of a team accustomed, before his arrival, to reaping success.

The strange thing is that Puig, irrespective of this lukewarm response, instead of taking a position and anticipating changes, continues to look at the great future that the Repsol Honda team has… behind its back.

“Marc’s story is going in its own way – he explained, adding - He has had his surgery and fortunately it’s going well. But we cannot believe it’s all super positive. Positive is when we bring a competitive bike and we can return to our normal level of racing and results.”

It is not exactly clear where the competitiveness of the RC213-V 2022 is, but Puig continues.

“Yes, I talked to Marc. He is happy and his right arm is progressing. He met with the doctors and he is doing what they told him he needs to do. But we can be certain that he is following the situation here and sure he will show up soon to see what is happening first-hand, to understand how we are trying to improve the bike.”

Puig therefore is doing nothing but ... wait for the saviour, if not for the homeland, at least for the team, after the arrival of Jorge Lorenzo and Pol Espargarò (not to mention the arrival and immediate departure of Alex Marquez) gave the results that everyone is familiar with.

“Clearly it was not a good weekend, and we have to analyse it as quickly as possible to understand how to get out of this situation - added Puig referring to the disaster at Sachsenring – We are not hiding. We know we must improve. Assen is always a complicated track, it’s a very demanding track. You need to have a bike with good balance there because there are some high-speed corners and some very slow corners as well, you need to have good control of your bike. If you do not have bike control, Assen is a place where you can struggle a lot.”

Yes, that’s all well and good, but the results of the German GP speak for themselves and even if the climate in Assen should not see a repeat of the RC213-V’s high temperature problem for Stefan Bradl who complained of burns from a 'fiery bike' , it is not clear how these words can offer a glimmer of solutions.

All this while on the horizon, as was the case of Petronas with the Yamaha satellite team, uncertainties loom on the part of long-time sponsor Repsol that in calamitous times for oil companies like the current ones, may decide to review its strategies in the face of such a dramatic drop in results.

On the Honda front, however, beyond Alberto Puig's lukewarm words, all is quiet and this suggests a solid perseverance of the parent company in the management of the team. But is it a trench-silence aimed at avoiding negative comments or is something else concealed behind the lack of a position taken by someone higher than Puig?

After Suzuki's retirement, no one expects anything similar from the Japanese colossus, which returned against the 2-stroke challenge with the 4-stroke NR 500 in 1979, but what is certain is that MotoGP needs Honda. But not this Honda…