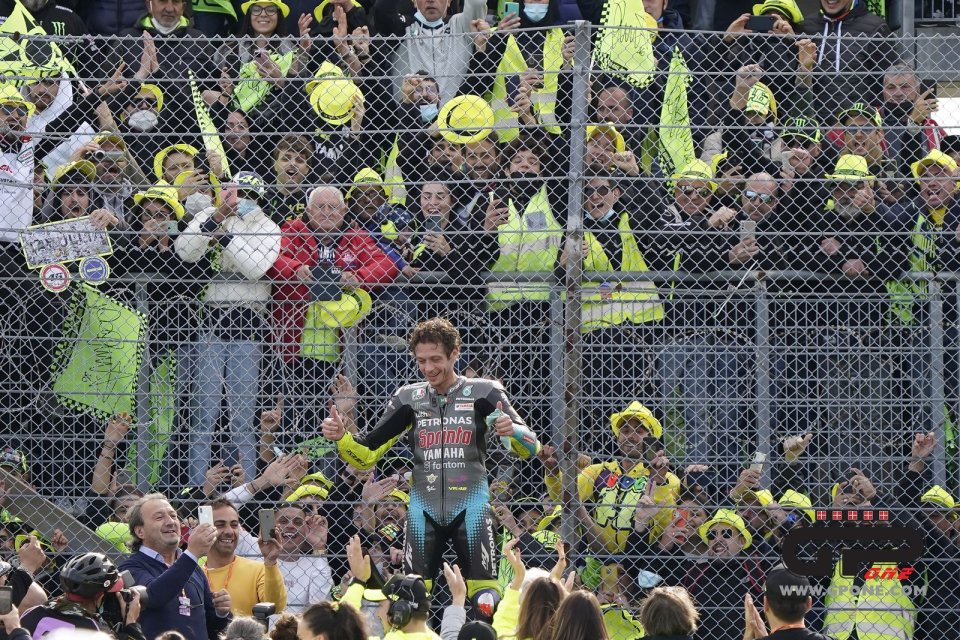 The mythical commentator Nick Harris, has published these facts, statistics and curiosities about the career of Valentino Rossi on his blog:

Valentino Rossi is the only rider to have won World Championships in four classes: 125, 250, 500 and MotoGP.

Rossi and Giacomo Agostini are the only two riders to have won premier-class titles on both 2-stoke and 4-stroke machinery.

His win at the 2004 season-opening GP in South Africa made him the first rider to take back-to-back premier-class victories on different makes of bike.

In 2004 he became only the second rider to win back-to-back premier-class titles on different makes of machinery.  Eddie Lawson was the first, winning on a Yamaha in 1988 and a Honda in 1989.

He holds the record for successive premier-class podiums, scoring 23 successive top-three results from the Portuguese GP in 2002 to the South Africa GP in 2004.

Rossi had the honour of scoring the 500th victory for Honda when he won the Japanese 500cc GP in April 2001.

He is the only rider to win five or more successive premier-class races on a Yamaha.

He is the only rider in history to have won five or more successive races on two different makes of bike (Yamaha and Honda).

He is Yamaha’s most successful rider of all-time with 56 race victories on their bikes.

His 89 race victories in the premier-class are more than any other rider in the history of Grand Prix racing (second on this list is Giacomo Agostini with 68 premier-class wins).

He has won 115 GP races across the three classes.  Only Giacomo Agostini with 122 wins has stood on the top step of the podium more in grand prix racing.

Valentino Rossi’s third place finish at Jerez in 2020 was the 199th time he has stood on the podium in the premier-class, more than any other rider (second on this list is Jorge Lorenzo with 114 premier-class podiums).

He has been on the podium 235 times across all classes, which is more than any other rider in the history of Grand Prix racing (second on this list is Giacomo Agostini with 159 Grand Prix podiums).

The Valencia GP will be Rossi’s 432nd Grand Prix start. This means that he has taken part in 44.4% of all grand prix events that have taken place since the world championship series began in 1949. (The rider with second most GP starts is Andrea Dovizioso with 332 by the end of 2021).

He also has the longest winning GP career across all classes; 20 years 311 days between his first GP victory in the 125cc class at Brno in 1997 and his last GP win at Assen in 2017 (second in this regard is Loris Capirossi with a GP winning career of 17 years 49 days).

During his career Rossi has competed at 38 different grand prix circuits.

Of these 38 circuits, he has taken at least one GP win at 29 of the circuits.  No other rider in the history of motorcycle grand prix racing has won at as many different circuits as Rossi.

The circuits at which Rossi has had most GP wins are Catalunya and Assen where he has won ten times at each of these two circuit.

In the premier-class Rossi has competed at 29 different circuits.

He has won in the premier-class at 23 of these 29 circuits.

The circuit where Rossi has had most premier-class wins is Assen, with eight.

The circuit at which Rossi has made most grand prix appearances is Jerez, where he has made  27 GP starts across the three classes, including 23 in the premier-class.

In the premier-class Rossi has shared the podium with 38 different riders.

The last time that Rossi shared a podium with a rider older than himself was at the 2008 Czech Grand Prix, that rider being Loris Capirossi.

With Valencia being Valentino Rossi’s last event it will very likely be the last time that a rider born in the 1970s will start a Grand Prix race.

There are three riders Rossi has shared a premier-class podium with without standing on a higher step: Alex Rins, Fabio Quartararo and Stefan Bradl.