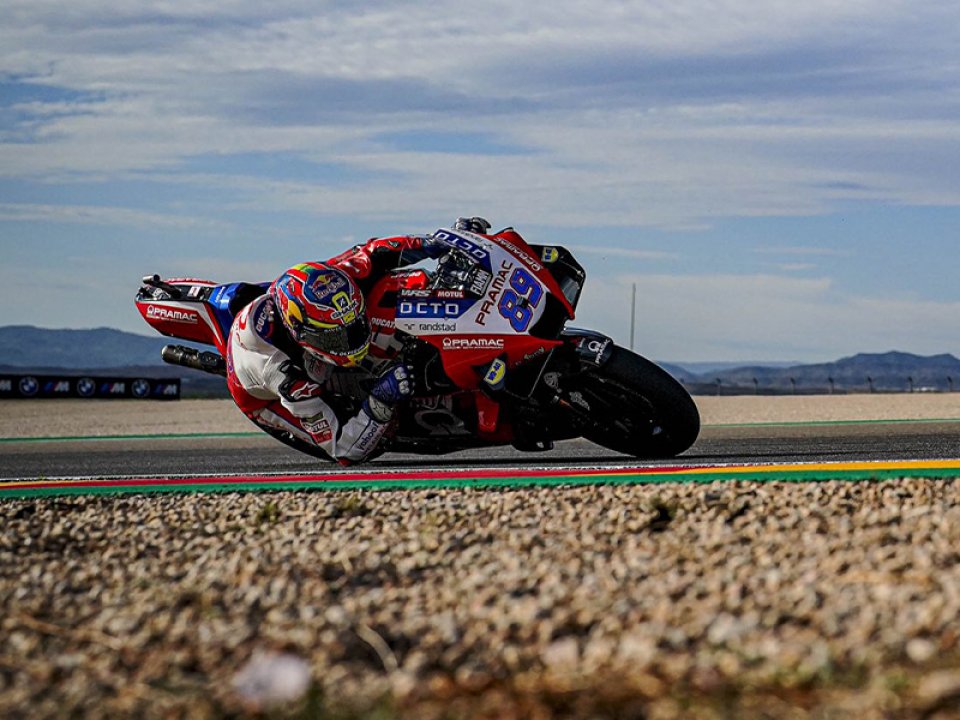 Mission accomplished for Jorge Martin, who at Aragón continues to remain up in the top area of the standings: the Spanish rookie of the Pramac team ended qualifying in fifth, half a second from Pecco Bagnaia's pole, and tomorrow he will start alongside Marc Márquez, with whom he made contact at the start on the first lap at Silverstone. For Martin, a top-5 place in qualifying allows him to reach his personal goal and to be in a good position for another race as a possible protagonist.

“Riding a MotoGP bike on this track is never easy, yesterday I struggled but as soon as I put the medium on the front I felt more confidence. I'm still learning the bike, and the feeling is very good,” said the Spaniard. "Honestly, I expected more from qualifying today, I thought I had something more in the second stint but I kept losing the front everywhere and it wasn't easy. However, starting from the second row is important here, the first corners are not easy, usually you see some crashes. I hope to have a good start and to push ”.

How was the pace in FP4? It looked good but you didn't run on heavily used tyres unlike the other Ducatis.

“The problem is that we still have to decide which rear tyre to use. It won't be easy, we have a double choice, both soft and hard. I'm not far from the factory riders, maybe I'm missing a tenth, the end of the race will be more important than the pace ”.

What do you expect from tomorrow's race? You said that this weekend your goal was the top-5, right now with your position on the grid you are respecting this target, do you think you can keep it in the race, or even improve it?

“I see myself strong but I think the 4 riders in front of me are the best this weekend and it will be difficult to beat them. As I said, I don't see myself far from the official Ducatis, for example. I think Fabio and Marc have something more, but on a track like this where we are competitive in the 4th sector, I think it will be difficult for them to overtake and escape. However, I look good, I am respecting my objectives, I expected something more from my time. As for the race pace, it will be difficult to choose the tyre to race with, both front and rear. We will have to work in the afternoon to choose the best option ".

In qualifying, Pecco set the time with the hard in front, Miller with the soft, you with the medium: there is a big choice for tomorrow.

“I rule out the soft one, between the medium and the hard it is difficult to choose because if I were on my own I would put the medium but it will be a group race, it will be hot and I think the hard can be a good option, but the sensations are not very good. I don't know, we'll decide in the afternoon. With the hard I raced in Austria and I didn't feel bad ”.

After what happened a couple of weeks ago on the first lap, will you change the way you deal with it? You will also start alongside Marc.

“We are in MotoGP, if you don't push they eat you, there are the best riders. We will have to get out on the track and be aggressive trying to give our best. Starting close to Marc will not affect me, I will have to make my start and figure out where to pass, on the inside or outside. But I start from the second row and I'm calmer, here the first corners are always complicated and there are always crashes, starting from the front you have less of this problem ”.