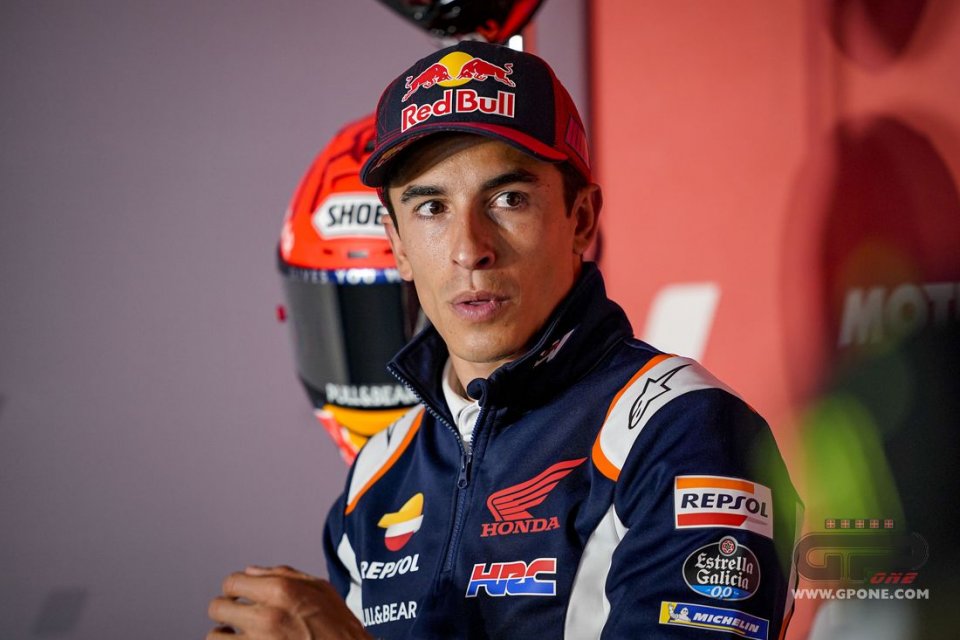 A few days after his return to victory at Sachsenring, Marc Marquez is still radiant, but at the same time aware that this will be an isolated episode. In the press conference before the TT Assen, the Spanish champion continues to repeat it.

“Last Sunday's victory came at a very important time - he explained - I was in a bad situation and it motivated me, the team and Honda. But I think that here we will go back to what my real situation is, we will try to get past this GP, then I will have more than a month off to continue my recovery process. I think I'll be able to ride better here than at Mugello and Barcelona, ​​but I can't expect to be on the same level as Sachsenring ”.

Marc knows that his physical form is far from perfect.

“The summer break will be important for me - he reiterated - If I put a lot of stress on my arm and shoulder then I have strange sensations. It is one thing to do many laps in a test, like at Barcelona, ​​if I stop and then start again, everything is fine, but after a race I struggle. I also feel it when the weather changes, the humidity changes, but it is normal as the doctors explained to me ".

A limitation that, perhaps, could have the advantage of making him predict what the weather will bring at Assen…

“Given my difficulties, I pray for the rain! - he said - If it rained on Sunday everything would be easier, but I don't worry about it too much because for me it wouldn't change the final result of the championship. The important thing will be to take a step forward, but compared to the performances of Mugello and Barcelona, ​​not to those of Sachsenring ”.

Marquez knows that he will not be able to give everything, otherwise he will only make things worse.

“I am ready to suffer, but if I did it for the whole race I would crash again - he underlined - At the Sachsenring I was able to ride smoothly and precisely, but I know that track well and there are only 3 right corners. At Assen I can suffer for 10 laps, but if I wanted to do it for the whole race, I'd end up making a mistake. The victory convinced me that I could do it but in the future, not now. This means that the goal for this weekend is to be in the top 10, nothing else. "

However, Marc will not only have to work on himself, but also on the bike because Honda is also in a difficult situation.

“We are trying to find a base to be able to start working from there - he explained - At the beginning I was riding a bit strange, but from Mugello I am using more or less the style as before and a setup close to that of 2019. Now all Honda riders try to have a similar bike to mine, because it's a little different, but the Sachsenring is the Sachsenring, on any other track it will be more difficult. Pol is struggling to be fast and steady, maybe Nakagami is the one who understands the best way to ride this bike, but we are still in a difficult moment. In Germany all the problems have not disappeared, here we will try something different and in the second half of the season we will start preparing for 2022 ”.

In other words, Marquez has returned to a similar bike to the one he used in 2019.

"Last year I did not race and HRC continued to try some new things - he specified - The performance of the bike was not bad, Alex made two podiums, Bradl was consistent and Nakagami was fast. When I came back, in the first few races I couldn't understand much about the bike, but as soon as I could I found something strange. So, with the team, I started analysing what had been done in the Qatar tests. A few things had changed, the riders liked it, but the performance was the same or a little worse, but when you use something new you have to go faster. So I wanted to go back to something I knew, which is the bike I was using in 2019, or in 2020 at Jerez. That became my base then, from Le Mans, I started testing until I found my bike at the Sachsenring. From now on I will try the 2021 material, but to find a way for 2022, not to improve the performance of the bike this year".

Marc was also asked what he thought of Rossi still being on track next year.

“With Valentino everything is possible, he is still racing at 42 and if he wanted to continue it would be good for MotoGP”.