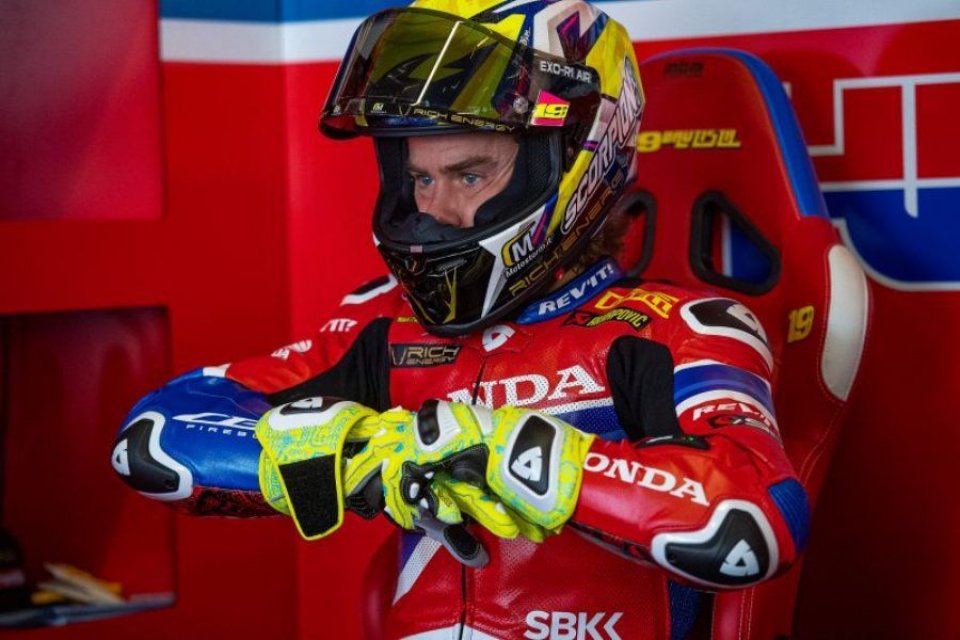 Sixth 14 seconds behind the winner, Rinaldi, but just over 10" from Rea, the last to get on the podium and in a small group, 4” from Redding and just one from Lowes. Alvaro Bautista could be satisfied with that result but after just few days ago the world champion himself indicated him as his most difficult rival to beat in his only season with Ducati as a rookie in the championship, the Spaniard is not. But not because of his riding, but for some unresolved problems of his Honda.

"If we are talking about performance, then I'm not happy. Especially today in FP3 I don't know why, but I suffered a lot with the bike, which was very unstable especially when braking. Honestly, I finished FP3 and I was almost about to cry, I could hardly ride. But we made some changes for the afternoon and I think the conditions, with less grip on the asphalt, also helped us to make the bike work better. The morning was a disaster, I couldn't ride ".

How did you manage the situation anyway?

"In Superpole, with the small changes we made, I felt better but I continued to suffer under braking. I don't understand why, seeing as both in Estoril and Aragon we didn't have this problem. Here it came straight away. Superpole wasn’t fun, because in Portimao they cancelled my best lap because of the yellow flags. Here I found the yellow because of Gerloff, I lost my first good tyre and my time. I was a bit angry, but at least I had a second chance and I tried to do my best. I didn't want to exceed the limit or do a super lap, but at least I wanted to make no mistakes. I didn't feel great on the bike, but then for the race we took a small step forward thanks to the setup and we improved the situation just a little. I suffer when I have to overtake the others, especially here because I can't pull away hard and I also have little grip on the rear. I lose too many metres coming out of the corners and when I want to try to pass someone on the next straight I am always far away. When the situation is this and I also have problems under braking, it becomes chaos because I don't know how to pass the others. I did a lot of laps behind the other riders, while when I'm on my own I can find my pace which may not even be fantastic, but it's acceptable. The problem is that I lose three or four laps behind the others. "

What is HRC doing? Do you speak to the manufacturer in Japan?

"HRC is working a lot on our problems and on this project. They are working for SBK like they do for MotoGP. Here we have the MotoGP project team, who has the same role for SBK as well. I think everyone in Honda, including me, expected more from this season, but we understand that we haven't made a clear step forward compared to last season. But now the development is continuing and I don't know where we are because there are so many aspects where we can improve the bike. There are so many things to improve, it is a general matter that concerns everything. We can make progress in every aspect".

Has anything changed with the arrival of Leon Camier as team manager?

How is it possible to solve the problems, perhaps like BMW which made a new bike?

"I'm not the person who can decide this, I can only give my best. In this championship it is not possible to make new frames or things like that, as they do for example in MotoGP. If we could, we would have arrived at a certain level first. Here it is difficult because we cannot change too many things on the bike, we cannot change the frame, make it more or less rigid. Nothing. I'm not an engineer, I just tell them what my feelings are and they tell me how they want to solve each problem. I don't tell the engineers that we need a new bike. I only tell them the things that don't work. They decide how to operate to make things work. "