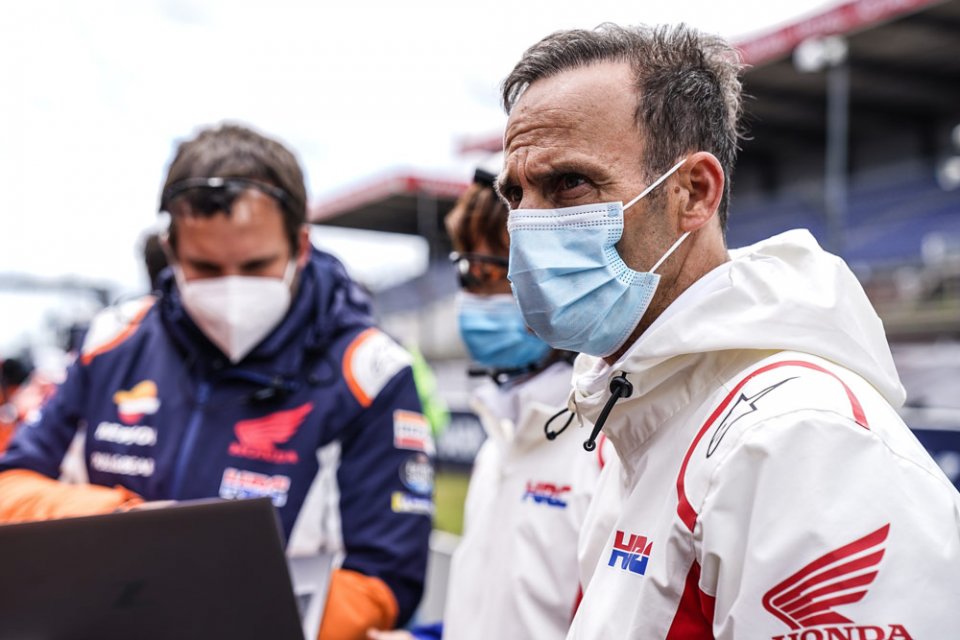 Alberto Puig returned to the HRC team wall at Le Mans after a couple of races in which he was forced to stay at home by some physical trouble. The Honda team manager was therefore able to enjoy first-hand the attempt of Marquez, who led the GP for 3 laps after the bike swap before crashing. Even though his race ended with another crash, the Spanish manager was quick to applaud his rider.

“The conclusion from the race is that when you are born a champion, you will always be a champion – declared Puig - Marc saw the chance to win in Le Mans and even with his physical condition, he tried. He was leading the race, crashed, and then remounted and was again the fastest rider on track. It’s a pity he fell again but his spirit and the will power he has inside is unbelievable. Of course, we are not happy with the end result, but we are happy to see Marc showing us his true self, it hasn’t been lost after all these hard months.”

Despite the result, the balance sheet can only be positive…

“The negative is that Marc crashed and the positive is seeing the spirit of this man - he continued - What really defines you is your spirit. After all these months he has never give up. We could see in Le Mans he saw he had the chance for victory, even if in these circumstances it was untouchable at the end. He wants to win, and sooner or later it will happen. He is not ready from a physical point of view right now, but Honda HRC knows this and waits until he is ready. Probably Marc needs more time, and we are here waiting.”

Despite the satisfaction of seeing a fighting Marquez again, Alberto does not hide the Honda's problems.

“Currently we are facing some issues, as we said in Jerez, and we are not hiding this – he admitted - We have to improve the RC213V, we must. Marc’s circumstances are unique because he is still injured, and he is not 100% fit. His focus is returning to full strength step by step. But on the other hand, we have to improve the bike and this is what the engineers are trying to do and they know the time frame for this. The next two races (Mugello and Barcelona) are two very demanding tracks, especially Mugello, and we need to find a very balanced machine. Let’s see if we can prepare some solutions, arrive, and do our best.”

First title decider at Sepang: the combinations for Bagnaia to become champion