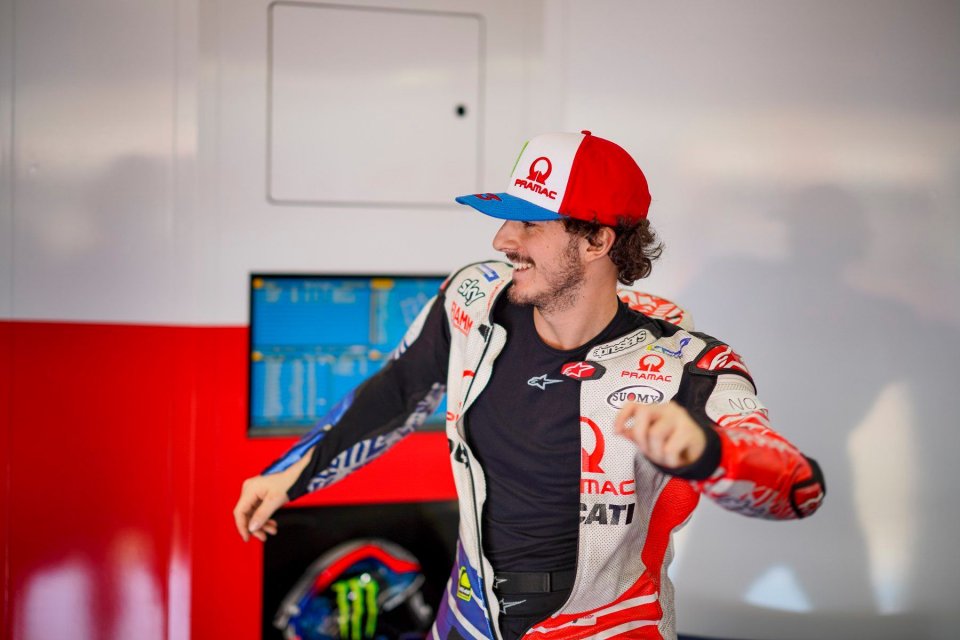 In Q2 we almost had a major upset. Until the third sector Pecco Bagnaia and his Ducati were momentarily on pole at Jerez, then Rins’ crash forced him to slow down, losing those two-tenths that most probably denied him of the pleasure of being able to start in front of everyone else in the Spanish GP .

The opportunity might have been wasted, but this does not matter to the Pramac rider. In fact, he was really satisfied with fourth place, just 93 thousandths away from the chrono set by Marc Marquez.

“I'm happy for this day - the Italian said - Over the weekend we used a different strategy than usual and it worked. On Friday I concentrated on race pace, getting good results, while this morning I got direct access to Q2. I would never have expected to get below 1m37s. Pity about Rins crashing, I lost two-tenths and a half as seen on the telemetry, but fourth place is OK in any case".

Two-tenths and a half less would have been pole…

"I’m not thinking about that (he smiles), you never go anywhere with ifs and buts".

Pecco, as far as the race is concerned, what can you expect?

“I am convinced that I have a good pace, but in the first phase of the race I will have to try to stay glued to the leading group. I expect there to be a lot of race management going on. Last year at Jerez I struggled a lot in the race and in qualifying and inside myself I would like to reach the finish line with a gap of less than 10 seconds from the first. Personally, I feel great confidence with the bike and it's positive. These five months at home have done me good. "

Is it legitimate to think about the podium or is it too early yet?

“At the moment, my goal is to remain in the top 10, then if I manage to do something more it will be better. To be honest, I don't even want to think about the podium. As I said, I'm happy for this day, also because this qualifying session was very unusual with four riders close, while the others were further away. "

What happened with Vale in qualifying?

"On that lap I tried to pass him in the last corner, forcing a lot on the brakes and going a little wide. Nothing more though ”.

As well as the track, everyone is also talking about your future. What is the situation at the moment?

“My goal is to stay with Ducati next year. At the moment the season has yet to start and I don't know how it will evolve. "

Compared to last year, how much do you think this Ducati has changed?

“Last year I struggled with Ducati on the brakes, as well as in the race. Knowing today that I have the same package as the factory riders available has given me motivation, because it means that Ducati believes in me and that’s really great".

“Is the Honda difficult? All MotoGPs are. It depends on the rider. Tonight my head will work a lot, and tomorrow it’ll be better.”
4 hours 17 min ago

"We tried some small new things and I'm confident". Martin: "I have pain in my neck after yesterday's crash, but I'm happy with today's improvements"
17 hours 59 min ago