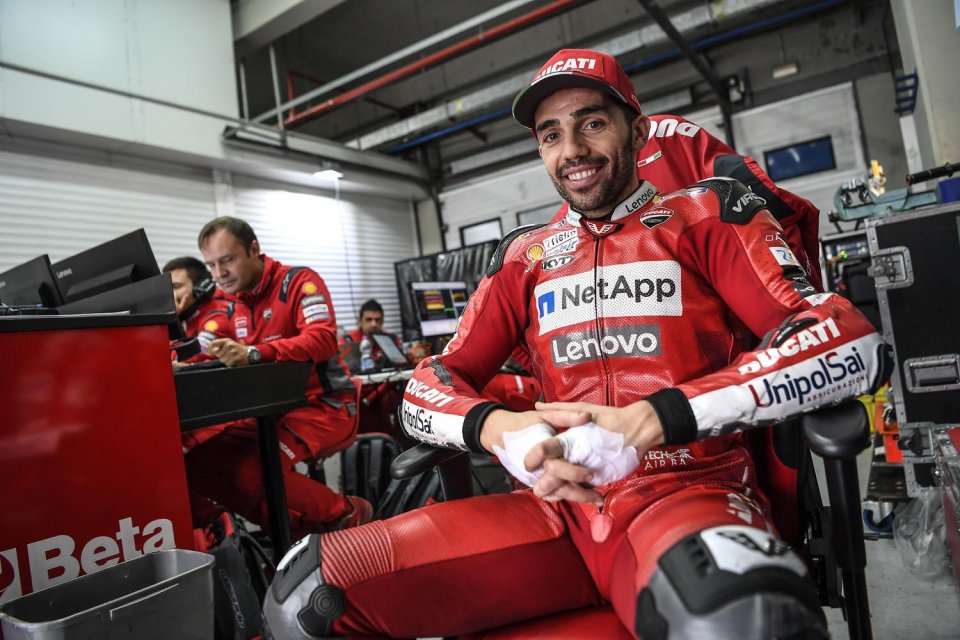 After Carmelo Ezpeleta and the in-depth analysis on Ayrton Senna, yesterday’s guest in our usual 18:00 live broadcast on the YouTube and Facebook channels was Michele Pirro. The fastest MotoGP tester around was a guest for an hour's chat with Paolo Scalera and Matteo Aglio and was able to answer your questions starting with those on Andrea Dovizioso.

“Dovizioso is lacking a bit in self-belief and limits himself. Obviously, it is not easy and when we talk about beating Marquez, we are talking about beating a phenomenon. In any case, Dovi has a lot of speed and can compete with everyone, he can do it and in recent years he has been doing a great job”.

However, Alberto Puig said that Dovizioso was interested in the vacancy in HRC. Do you think he will stay with Ducati?

“When contracts expire everyone looks for alternatives, Dovizioso maybe offered himself to HRC because they needed him. In my opinion, Dovi has done well to stay in Ducati and will do well to do so in the future; seeing how the rider market is evolving I don't see why they shouldn’t reconfirm the current riders. I expect Andrea will evaluate what is best for him, now he has made the right choice because Lorenzo told me that when he arrived in Honda, he would have beaten Marquez, but instead he ended his career ".

Speaking of Lorenzo, what was the problem with the Majorcan on the Borgo Panigale bike?

"His problem was not adapting late, it is that when there are so many expectations and pressure, one does not work calmly. Dovizioso took great advantage of Lorenzo's situation and engaged the right gear that brought Ducati close to the championship. Jorge is an incredible talent but he is difficult to manage, especially for silly things or for issues that he saw in a particular way; after taking a mental step forward and getting rid of the contractual question he returned to being competitive and winning. Lorenzo was used to riding the Yamaha which is a bike that helps you to slow down, while on Ducati you have to brake very hard but you can’t do it just with your arms, I advised him to train on his legs ".

Do you think Jorge could have fought for the world championship if he had stayed in Ducati?

"In 2019 Lorenzo would have fought for the world championship, but he would have done so also in 2018 but after Aragon and Misano what happened, happened. Obviously, he would have been at the same level as Dovizioso, but it would have been really complicated to keep up with Marquez’s pace”.

Do you see Jorge in the world championship in the future or do you think his retirement is definitive?

"In 2021 I believe that a lot of things will remain the same and that there will be no more places; obviously Jorge is strong and needs to get back to doing some laps to show that he is competitive and I see him going back to racing as being very complicated."

"I would have liked to have Marquez in Ducati"

And Valentino instead? Do you think he will continue?

"We will have to understand what effects the quarantine will have on Valentino; if he wants to continue, he will race with Petronas for another year and maybe with Morbidelli".

Marquez in Ducati? Do you think Marc wants to show that he can win with a bike other than the Honda?

“He signed with Honda until 2024; if he were to arrive, it would be nice, but I hoped he would come sooner. In 2025 we will have to see how competitive he is, because the years pass for him too and we know that the youngsters continue to arrive”.

Is it true that other manufacturers have also come looking for you? There had been talk of a concrete interest from Yamaha in replacing Folger.

“What I have done with Ducati is a benchmark for all the test teams, even those of the other manufacturers. I have also been contacted by others, but I have become attached to the Ducati brand and I know I have done a lot of great things. They have given me a lot and I have given them a bit of my career; I think I would have had a lot of satisfaction in the world championship. However, it is not over yet and I know I will have other opportunities, even though at the moment my goal is to see Ducati win the world championship ".

"The 'Stoner map' was impossible, something inhuman"

Would you return to racing full-time in the world championship?

“Unfortunately, my dream always remains to race in the world championship. I know it's difficult, but I don't think I'm inferior to many other riders who race all year round. Obviously when you do three races a year in the midst of those ‘monsters’ it is hard to prove anything. "

Let's talk a bit about the past. What was it like working alongside Stoner?

"It was a fortune to work with him, as well as with other champions, but Casey has characteristics that cannot be replicated, he was the only one who really impressed me. His was an incredible riding style. I once tried his mapping during a test and was unable to finish even a lap at Sepang. He used to lap without controls and was able to manage everything with his wrist, I think he is the only one who had this characteristic. The ‘Stoner map’ is something inhuman. "

What was the problem between him and Ducati?

“Casey was an advantage and a limit for Ducati. He won but there are few men like Stoner, just like Marquez, Rossi and Dovizioso when he's on top form. The problem is that all the riders who went through that team struggled; he won, and the others finished 15th. Someone like Stoner does not let you develop, with him you win and, in these years, after losing Stoner, we have had to make up for the development we did not do. "

Before talking about the SBK season, how different are production-derived bikes and a MotoGP?

“The difference between the two bikes is enormous but explaining it is complicated because it’s all a question of sensations. Someone like me who rides both bikes and takes them to the limit manages to find a compromise and changing bikes is not a big problem, but many have struggled, realizing the difference. The CIV Superbike is practically a production bike with slicks while the World Championship one is somewhere between mine from the CIV and a MotoGP ".

What do you think of Ducati’s start in the world championship?

“Scott did not go badly in the first race, even though everyone had in mind what Bautista had done last season. The bikes have levelled out a bit and it will certainly be challenging for him and Chaz. Davies has a particular style and cannot exploit the potential of the V4, which is a compromise between a V2 and the MotoGP ".

What are the expectations? We still have the great job done by Bautista last year before our very eyes.

“The hope is to win also with Redding and Davies. Scott doesn't know the championship and some tracks and that's what happened to Bautista too. Alvaro immediately worked it all out and then something broke, also due to the contractual situation. Basically, the other way round from what happened to Lorenzo ".