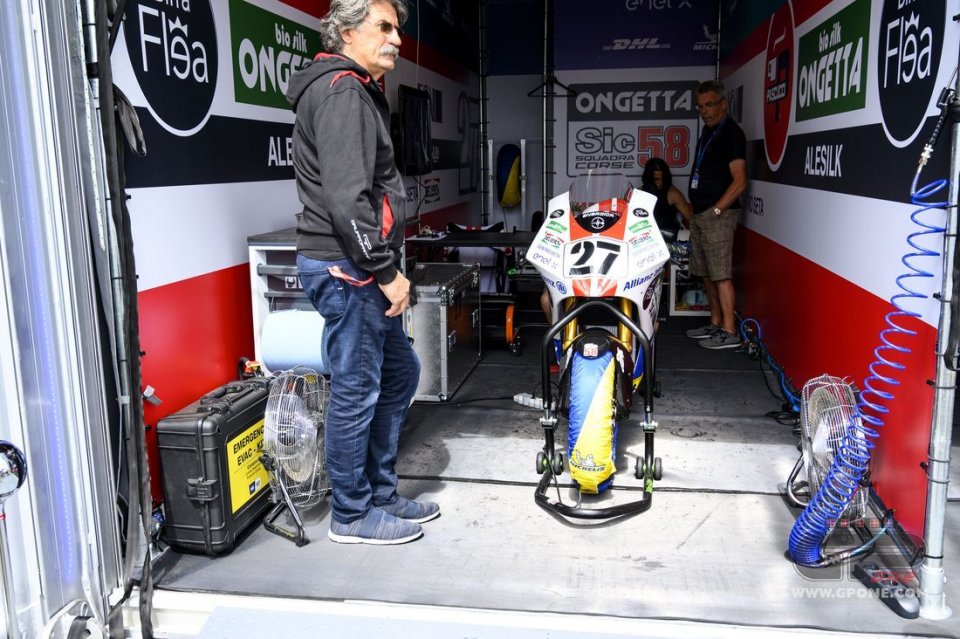 After each Grand Prix, Paolo Simoncelli offers his thoughts on the race weekend. Rather than a press release, the SIC58 Squadra Corse owner is keeping more of diary. Paolo says exactly what he thinks and did so once again after the Sachsenring round, which also involved the first MotoE race, a category in which his team competes with Mattia Casadei. The new formula fails to convince Simoncelli.

Let's see what he had to say.

"MotoE debuted at the Sachsenring circuit, surrounded by curiosity and expectations. We immediately noticed two things: as first, the price to manage a crash is very high, and second, we're wondering what type of damage a 270kg bike can cause when it crashes into things and/or people. And this was demonstrated by the only crash that happened during the race."

"Anyway, our rider Mattia Casadei "payed"  for the mistake he made at the Valencia test, where he crashed, destroying the bike, riding not at his maximum, scared maybe to cause some more expensive damages, but he was good and he closed in 11th position a race stopped in the middle because of the crash of another rider. If the Electric Bike means progress...well, I don't like  the  future. One thing I really appreciate about MotoE is the SuperPole: a different format of qualifying that should be introduced also in Moto3."

"Let's go back to talking about our beloved noisy motorbikes. Moto3 has been a great race to watch but we've been protagonists just for a little and not the way we wanted because of the bad qualifying of both Antonelli and Suzuki. The first one because of his false conviction he's not strong in this track, the second one because he's been bothered by Foggia during his fastest lap. No matter what, Tatsu has been able to do a good race, fighting till the end to catch the front riders which were 2,5 seconds away, and he made it. He could have fought for the podium but he fell asleep in the first corner of the last lap, he needs some more "cold blood" and strategy at the end of the race."

"This is what I want from him, even taking some more risks. It's ok to think about a possible mistake, but you can't wait others to mistake, sometimes you have to take a chance even if it's risky and an amazing overtake can happens and take you to the victory. What we always say: "Champagne or gravel", our motto, should be done more often. About this, I want to say that is stupid that a rider, before being punished, have commit the mistake several times. Canet overtook Tatsu crossing the turn, exiting two meters outside the track and this is not fair. He should have been penalized. It's way too easy to mistake in a turn gaining one position at the end of the race finishing in the podium. Too easy!"

"Our chief technician Marco Grana is also a very good mental coach for Niccolò, who began the weekend with the idea "I can't go fast in this track", but Grana has been able to fix this problem. During the race, when Antonelli reached his teammate, but instead of following him, he've been stopped by an impetuous Binder who hasn't understand yet this is a motorbike race and not a bumper cars game, so Nicco lost the train. He can still fight for the Championship and the next two tracks should be his favorites."

"The crazy rider's market is opened, we hope to be able to maintain the same team also in 2020! Now it's time for everyone to enjoy the sun, the beach, the CEV race next Sunday and to have some deserved rest... see you in Brno!!"