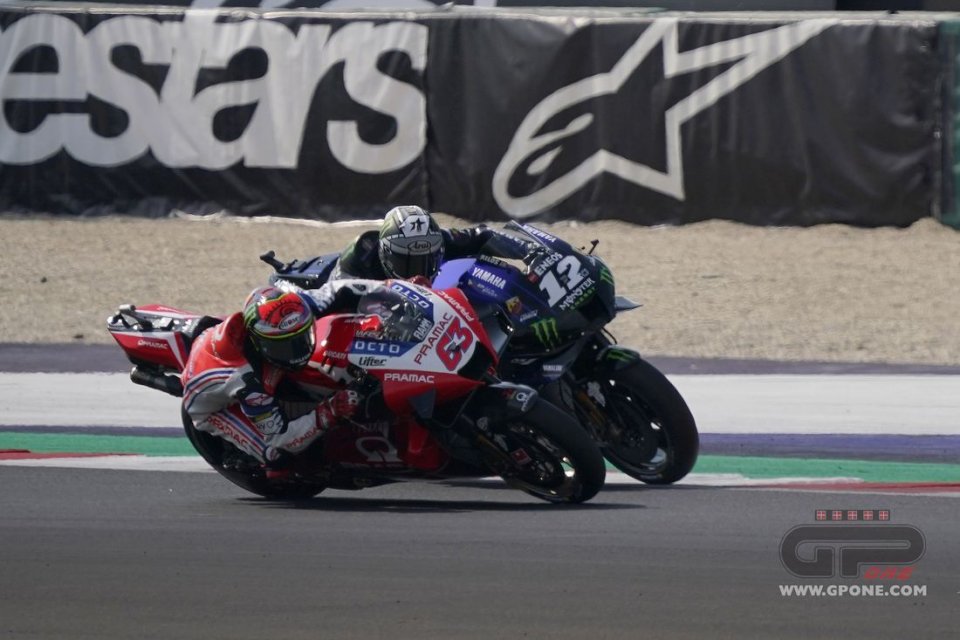 There is nothing worse than seeing a dream disappear between your fingers when joy turns into anger in a fraction of a second. It is a feeling that Pecco Bagnaia can say he knows well. There were fewer than 7 laps to go before the finish when he found himself sliding into the gravel.

"It seems that this year goes hand in hand with bad luck - said the Pramac team rider angrily - It bothers me particularly because the Ducati is awesome. At Jerez, the engine broke when I was about to make my first podium, at Brno for a stupid mistake I got hurt and I missed three races in which I could have scored some good results, today I crashed ”.

"The thing that bothers me the most is crashing while I was managing the race, if I had been pushing to the limit I would have accepted it but I feel I have nothing to complain about. The Ducati has a great engine and is strong in braking, this allowed me not to push too hard on the tyres, I just had to manage the first phase of acceleration ”.

So you didn’t make a mistake?

"It seems to me an inexplicable crash, I want to study the data carefully, it looks as if I touched something, like a tear-off or something dirty on track. Usually the front warns you before it goes away from you, instead it went away immediately, without any warning. Crashing like this without any warming from the lap before is very strange, I am not disappointed but angry ”.

Vinales was getting closer, maybe you were nervous?

"Maverick wasn’t putting any pressure on me, when he got closer I pushed a little harder and went away again, all in maximum safety, I wasn't at the limit. In Moto2 I was used to managing certain situations, Vinales would have caught up with me with difficulty. The thing that worries me the most is crashing without any explanation, for this reason I think I touched something ”.

Did you think about what would have happened without that crash?

"I also know that without the breakdown at Jerez and this crash I would be 5th in the championship, 10 points from the first, but thinking with 'ifs' and the 'buts' gets you nowhere and I don't like doing it. Unfortunately in life there is no rewind button”.

What have you learned from this race?

“To bring a broom on the sighting lap to clean the track well (laughs). Seriously, I haven't felt so good since I won the Moto2 title, in fact I feel even better. Dominating a weekend in MotoGP is a wonderful feeling, it's a pity to have done so much and not done anything ”.

But next Sunday you will be back on track…

"I can't wait for Thursday night to go to sleep, wake up and start a new weekend. Barcelona, ​​unlike Misano, is a very suitable track for the Ducati and I will get there after a weekend in which I have taken some steps forward. Today I was able to be fast from the first laps, unlike last Sunday, and in the race I made a difference ”.

Dovizioso, on the other hand, continues to struggle, how do you explain that?

“When you can't ride the way you want, you struggle, it's hard to go beyond the problems. I am very happy with the GP20 and the new tyres, while he is struggling. In the current MotoGP, the level is very high, even being slower by just 3 tenths per lap makes a big difference ".

Bagnaia: "I won to celebrate Valentino, so many emotions together"