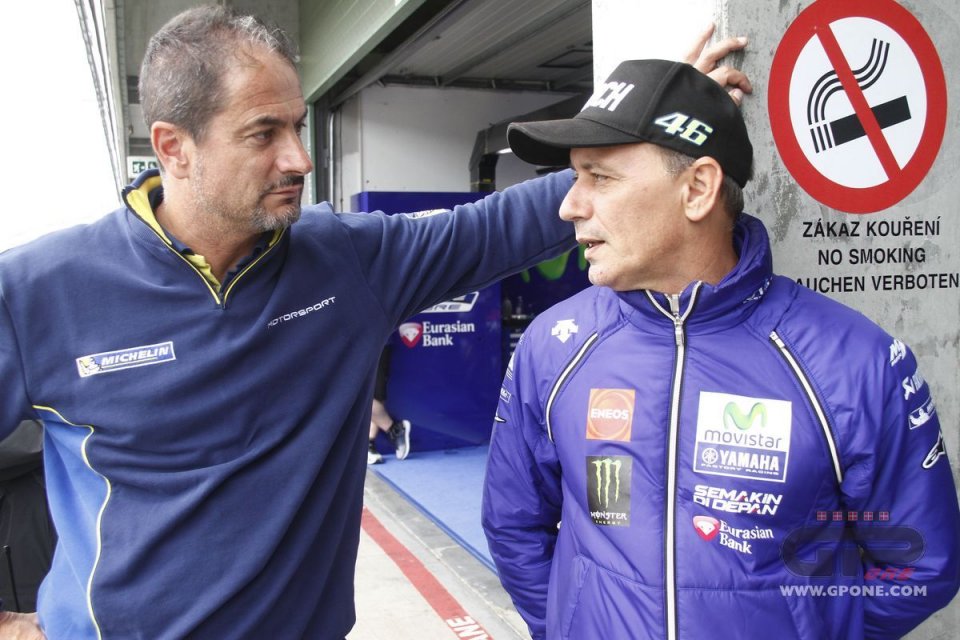 The test day that got underway at Jerez at 10am was key for some riders, in that it is their first chance to re-test the 2016 front tyre, the one with the stiffer carcass. We all the story by now - after winter testing, riders (with the exception of Rossi and Iannone) approved the new construction, giving Michelin the OK to continue, before starting to express doubts once the championship actually began.

The renowned 2016 tyre was also brought to the Le Mans test one week ago, “but track conditions, after the rain, didn't allow us to really evaluate it - explains Piero Taramasso, Michelin manager for the two-wheel sector - This evening, seeing as temperatures seem quite high, we'll have a clearer idea”.

Is this carcass better in hot conditions?
“Yes, because the compound works less and it helps to contain the operating temperature. At this test, each rider has two front tyres with a medium compound and two with the hard, so that they can work on performance but also pace".

Let's say that riders favour the 'old' tyre, when might we see it in a race?
“At Mugello, before then is impossible. But we'll let them test it again during private tests organised at Barcelona after the French GP”.

Is there the possibility of offering them both constructions simultaneously?
“No, that's what we did last year and we don't want to repeat that. In doing so, you need to bring 2 compounds for each type to every race, for a total of 4. First, it's against the regulation that limits the options to 3 and also it will be a limit for us, because we wouldn't be able to cover the full range of possible conditions”.

Were you able to do so at this GP?
“For as long as track temperatures stayed under 30° we had no problems, not in terms of grip or wear. But in the race, temperatures reached 48 and so we suffered more, particularly at the front. Also, rather inexplicably, the medium tyre worked better than the hard”.

The most striking thing was the fact that the 2016 Yamaha was faster than the 2017 version…
“Valentino and Maverick  had a hard front tyre,  Zarco a medium and so I think this explains the difference. The softer tyre 'bites' the asphalt more and offers greater traction through the turn though giving less support in braking. There was worry about its degradation but it held up”.

Vinales expressed doubts about a possible defective tyre...
“After the race we were only able to examine it visually, and it had no evident defects. We'll send it to our laboratory at Clermont-Ferrand for more in-depth analysis”.

“I braked in the wrong place at the wrong time. I’ve had worst moments in my career, and I’ve always gotten out of them.”
22 hours 54 min ago