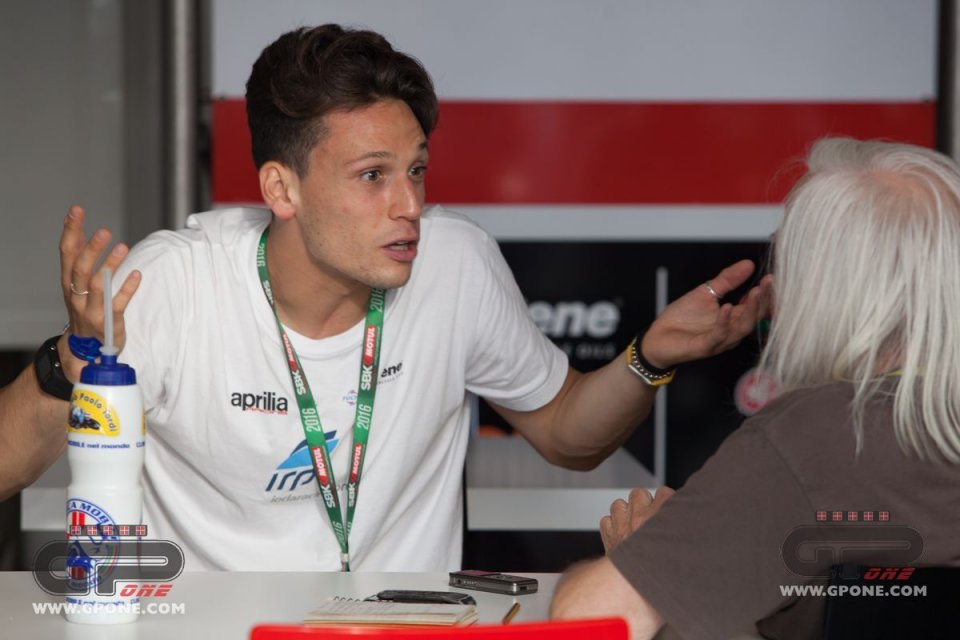 Lorenzo Savadori uncovers a haircut that seems to be constantly windblown from the right.

Lorenzo is 22 years old. In 2008 he won the Italian and European championship 125; then in 2015 he won the SuperStock1000 world championship. This year he races in World Superbike with the Ioda Racing Aprilia and Alex De Angelis as his teammate. He is a tall young man - that height that became normal for Italians in Grand Prix Motorcycle Racing only with Valentino Rossi. Light eyes and an expressive face that precedes his replies.

Q: as tall as Rossi but others were your first heroes.

A: true. In this case as well, just like with my character, things have changed over time. There is little to say about Valentino: he wouldn't need to demonstrate anything at all, but every year he improves compared to the previous year. Formidable. But it's true: the first rider that struck me was Troy Bayliss. Then, around thirteen years of age, Casey Stoner. After Stoner, Max Biaggi: a great champion, methodical...

Are you also methodical?

A: I try to sort things. I pay attention to details. The higher you go in the categories, the more you need to be that way. Not only when it comes to bikes. In everything: even in eating, drinking...

Q: looking at you it seems that you are like that even with the way you dress.

A: I'm not a fanatic, but I don't just throw things on with my eyes closed.

A: a button-down shirt if it's appropriate. 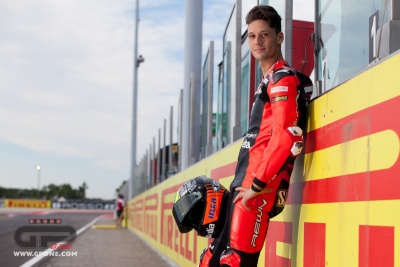 Q: you brought up school. Not I. Now I'm authorised. How did it go?

A: I dropped out in my third year of high school. Communications Studies high school, sports studies. I couldn't manage to juggle school and bikes. But it doesn't end here: between me and school it's a personal thing. As soon as I am able, I'll tackle it again and finish...

A: in high school an eight and a half in English.

Q: considerable. And in general?

Q: you're slim. You could be a good cross country skier.

A: I weigh too much: 75 kilos. Which on 1 metre 85 is not much, but carrying it around for kilometres and kilometres is not easy. Disciplines that require brief sprints are better. After all, it takes muscle to ride a bike. I can't get any lighter than this.

A: football. I played fullback. Then I chose bikes, but I still have football in my heart. I wore a sticker on my helmet that said “dai, burdel” (let's go guys! In Romagnolo dialect) to support Cesena and the team gave me one of the most exciting days of my life. After I won the world championship, they arranged an awards ceremony on the pitch. Ten minutes before the Cesena-La Spezia match began. I came out of the tunnel and images of the World Championship played across the screen. The grandstands were packed. I still get goose flesh... Cesena won and a bond with the team was formed. At Misano, in the last round of the championship, Francesco Antonioli came to see me, a historic goalkeeper for the team, and today he is a keeper coach.

Q: The national team: we kicked off the championship on the right foot. 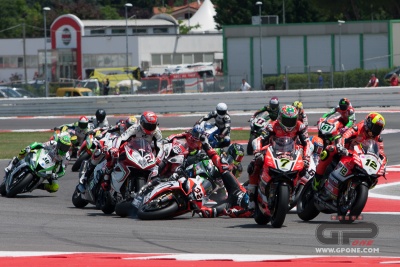 Q: do you still live in Cesena?

A: yes, although I see it less and less. When I pass through the centre at night I always feel a strange emotion. My bike club is the Paolo Tordi club. Which is a family. Every now and then I have dinner at the President's house.

Q: I think yours is a good job.

Q: there is none better.

Q: how would you describe yourself on the track?

A: aggressive. Let's be clear: that just means that I brake hard and, on a riding level, I am imposing.

Q: you had a very difficult beginning to your career. In the first years, there were more races that you didn't finish than the ones you did.

A: I was tall: I have never been shorter than 1.75 since I began racing seriously. The RSV was small for me. And the RSA even smaller. In fact, I went straight to the 1000cc without stopping at the 600: I needed power...

Q: did racing change your life? Do you think that Lorenzo Savadori would be different if he had finished high school and was employed by the Cesena Football marketing office? 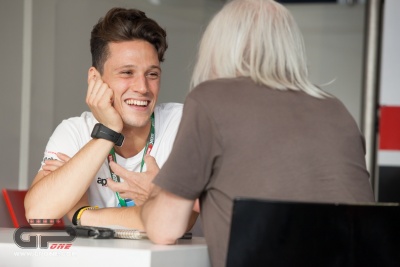 A: I'd say no. I have very simple habits. My friends. Running through fields or on the beach.

Q: are you a marathoner?

A: no, I run because I like to, but I do it with rules and a pace that will then be useful and beneficial for riding.

Q: judging by your age, you should be a social network type. Briefly, how would you describe yourself on a profile?

A: I like to learn. Yes, I'm someone who learns.

Q: if I say "happiness" what word would you use to respond?

A: Jujube. My grandfather had one. My mum's dad. Jujubes were one of the most beautiful things about fall.

Q: do you speak dialect?

A: I learned it from my grandfather. If he had to reprimand me, he would do it in Romagnolo.

A: not even one. And no piercings either.

Probably the only case in modern motorcycling.