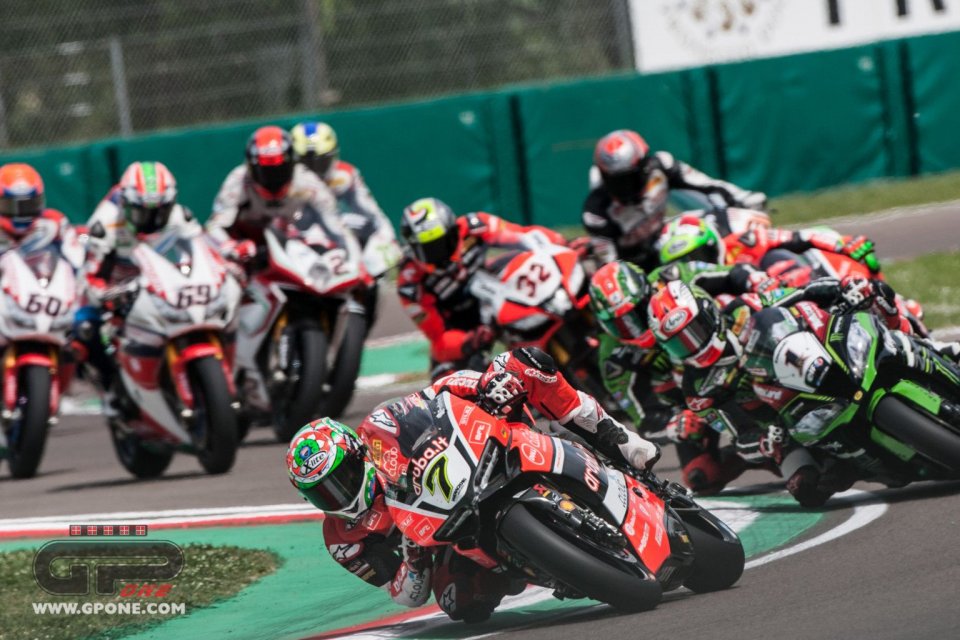 Today’s race 1 at Imola was rather a predictable one, already after the opening laps. At the Enzo e Dino Ferrari circuit, Chaz Davies, who got away well from pole, took no prisoners, quickly building his lead over the two Kawasakis that, with Jonathan Rea and Tom Sykes, placed second and third, limiting the damage in terms of the championship standings.

With this win, Davies makes up five points to leader Rea, while Sykes drops further away from both Rea and Davies. “Right from practice I had a great feeling with the bike. The win has come naturally.” The Welshman wasn’t even tired when he spoke in parc fermé immediately after the race.

Just missing out on the podium, Jordi Torres with the Althea BMW had a great race, passing Davide Giugliano in the final stages who, from second on the grid, was unable to keep pace with the front three and gave way to the Spaniard too in the final laps. Just eighth for Savadori, unable to make an impression at his home track, with a drop in performance from the mid-race point.

THE RACE -  A race shortened by one lap after an accident during the sighting lap involving the Yamaha of Frenchman Péter Sebastyen and the BMW of Dominic Schmitter at the Variante Alta. The riders restarted the race and it was Davies who got off the line quickest, leading the way at the first turn, with Rea and Sykes hot on his heels. After just a few laps Davies had built something of a lead but Rea didn’t give up and tried to claw his way back in the central phase but a mistake at the Tosa caused him to lose 5 seconds to the leader: “I had problems with the front tyre, as well as chattering already in the first laps” he explained a the end of the race. An error that allowed Sykes to catch up, and try to get the better of his teammate. Jordi Torres also moved up, closing fourth, while Davide Giugliano lost ground, as did Lorenzo Savadori who dropped back, passed by the MV of Leon Camier and the Honda of Micheal Van Der Mark.

Behind him were Nicky Hayden and Xavi Fores, who was unable to score the kind of results we’ve seen in previous rounds. 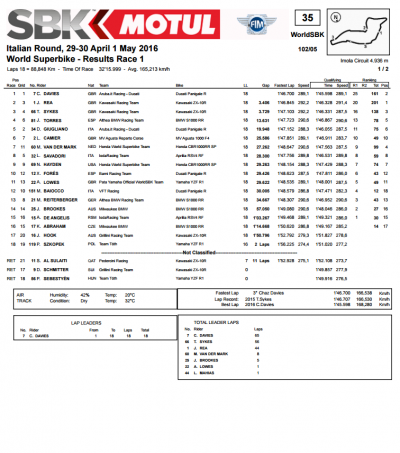