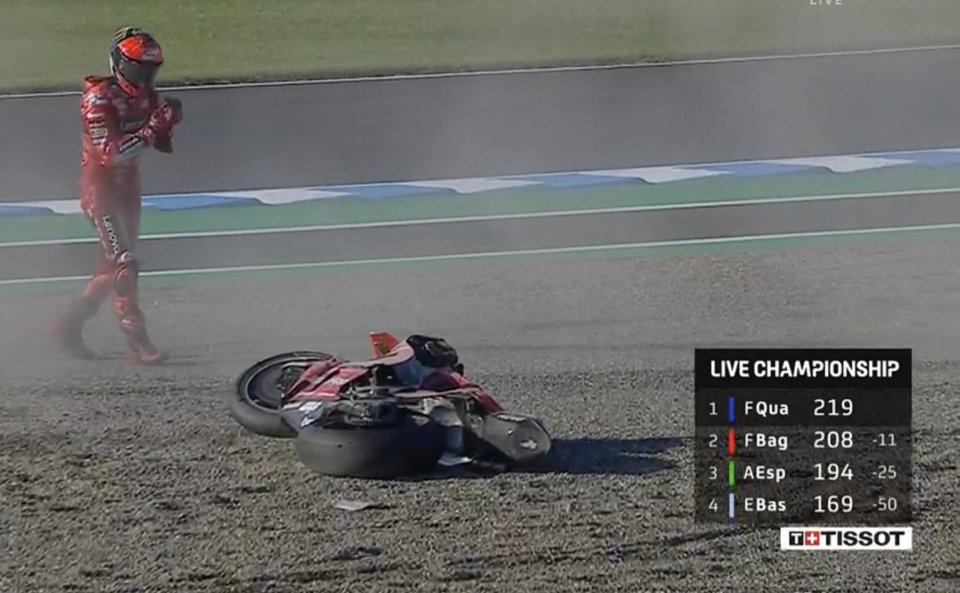 From hero to zero. Gigi Dall'Igna, very politically correct, acquitted Pecco Bagnaia from his last-ditch, futile attempt to overtake Fabio Quartararo: "I would have tried too", said the super-engineer who celebrated his 10th victory of the season with Miller at Motegi , probably to avoid an emotional breakdown.

That move would have earned one miserly point for Pecco. For goodness sake, world championship titles have been won by half a point, but Ducati’s top rider couldn't have made a more futile attempt in the Japanese Grand Prix.

Too bad, because up to that moment he had had a decent race. Sometimes you have to know how to settle for what you’ve got. Especially when you have the best bike of the lot. Even today, in fact, the Rossa placed two GP22s on the podium, with Jackass and Martinator, first and third with Binder as usual ... solid with his KTM in not letting go of the prey in front of him in the last few laps, but in the top 10 there are five Ducatis, adding those of Luca Marini (6th), Enea Bastianini (9th) and Marco Bezzecchi (10th).

Oh well, the world constructors’ title is already in the Borgo Panigale trophy case, but not winning the rider’s title this year, is crying out for revenge in front of the gods of speed, because the Desmosedici is fast on a flying lap, fast on the pace, always fast, but it still doesn’t have a rider who takes full advantage of it at every Grand Prix.

Bagnaia has been very good this year – he’s won 6 GPs - but he still makes too many mistakes and if it’s true that it is impossible to teach a slow rider to go fast, but you can learn not to crash, as Kenny Roberts said, it is also undeniable that in his fourth season in MotoGP he needs to be more consistent. At least until the regulations change and discarded points scores are not reintroduced on such long calendars.

His self-deprecating applause, in the gravel trap, absolves him as a nice guy capable of assuming his own responsibilities, but it does not give him a very positive mark in this Grand Prix. And in the championship. And not because of the mistake of a forced braking move in which he also risked taking out Fabio, but because starting 12th at that moment he was still behind Luca Marini (10th at the start), who finished 6th and he had recently made up a position on Bastianini who had started from the back row, in the 15th box.

For goodness sake, the world championship is still within his reach, because 18 points with still four races to go are not Mount Everest, but in any case between -11 and -18, the risk should have been calculated. And we finish our discourse here it noting that at the foot of the podium, just over seven and a half seconds behind, we find Marc Marquez. In a dry race, on a violent braking track. First Honda, obviously, 10” ahead of teammate Pol Espargarò, 12th at the finish. We are not making any comments, but Marc the Martian has weighed in heavily on the outcome of the world championship.

No blame however on the other hand for Aleix Espargarò, who was forced to return to the pitlane to change bikes after the 'Eco Map', created to consume as little fuel as possible in the alignment lap, was not switched off at the starting line. So to conclude on an ironic note, when will we see a button to release flares to disorient the following riders?