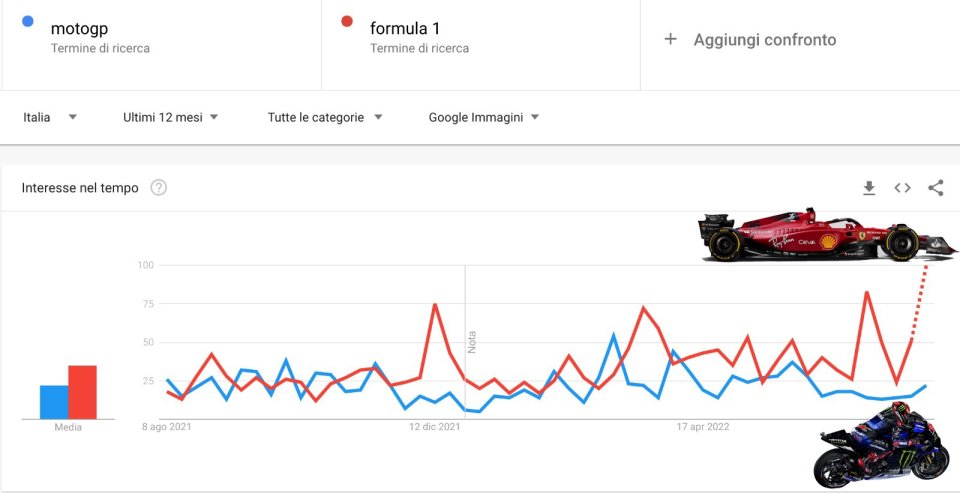 At Assen we reached the halfway point of the championship with Quartararo in the lead and Aleix Espargarò trailing by just 21 points.

A big surprise, an Aprilia fighting for the world championship against Yamaha, instead of the swarm of Ducatis occupying the next three positions with Zarco, Bagnaia and Bastianini should have aroused a lot of interest, right?

Interest in MotoGP has been declining in recent months, in contrast with the exponential growth of interest in F1. This is thanks to the (mis) adventures of Ferrari which finally this year appears to have a car and a driver, Leclerc, capable of winning the world championship but instead which has become the subject of absurd strategic choices that penalize it.

It is true that it is not exactly correct to compare F1 to MotoGP, especially when Ferrari is involved, but in recent years, however - and the Google Trend graph says so - two wheels had grown a lot, so much so to question the supremacy of four wheels.

On the one hand, thanks also to the arrival of Stefano Domenicali, the pinnacle of motorsport has woken up, on the other hand motorcycle racing, almost at the same time, has been forced to do without two outstanding benchmarks: Valentino Rossi and Marc Marquez.

It was not merely a question of abandoning any idea of seeing only Rossi on the track, because he had been absent from a competitive point of view for some time, but also of the rider who, for better or for worse, had taken his place.

This double absence, in the last three years, has made itself felt because neither the manufacturers nor the riders called upon to take centre stage have been able to attract the attention of the public.

The victory of Mir and Suzuki, in a fragile championship due to Covid, failed to arouse much interest. Italy’s great hope, Franco Morbidelli, vanished without trace in the following two seasons. Fabio Quartararo took his place, and Fabio is a nice guy, but he didn't have an opponent capable of offering much of a fight until the end. Add to this the fact that these last couple of championships with a plethora of winners and Bagnaia becoming a front runner, but without the necessary consistency, have not convinced.

It has been said that this happens because today the bikes are all competitive, that the distinction between factory bikes and satellites is almost non-existent, and above all that today the level of MotoGP is stellar.

That might be the case, but the public is not convinced, otherwise the trend would not be downhill.

This year there is the added attraction of Aprilia, with Aleix right at the top, something new, but the Noale manufacturer, which has produced a remarkable improvement on the track, clearly does not create the same level of attention as Ducati, which also this year, with eight bikes on the track, presented itself as an invincible armada.

There are no bones about it: that’s the bottom line. Is it wrong? Or right? The question is the right one, but pointless. That’s the way things are.

Naturally Dorna, Carmelo Ezpeleta, the rapidly vanishing FIM can do nothing about the absence of the king and queen on the chessboard. Without them you can't play. Yet the impression is that something more could be done.

The public needs 'serial winners', not fresh faces every Sunday. But above all it is quite simply unable to comprehend – and rightly so – how a rider who got on the podium one week earlier ends up in the rear of the grid in the next race.

Is the problem that the bikes are all the same and (perhaps) too complex to fine-tune enough that they end up by penalizing even the champions? Possible, but then this is a problem to be solved.

Also, because if even a champion is caught out by these traps, it is clear that today it is a particular, a detail that counts more than talent. And in sport that’s never nice.

The fairy tale, then, that our sport is based on the consent of the manufacturers within the MSMA, and therefore they are responsible for evolution to automatically stabilize the costs is just that, a fairy tale because when dissent on lowering devices or shapeshifters, whatever you want to call them, from a whisper became a rumour, Dorna mixed up the cards and banned them. Even though it was perfectly within the letters of the norm.

This means two things: the first is that it was realized that the direction taken went off along a dangerous tangent; the second is that there is a need for external intervention to correct the course. Because in the end this is a sport, but a sport that is based on spectacle and that must be taken into account.

Finally, a word also about the stars of MotoGP. We would love to see them, as well as their bikes, live their lives less on 'railway tracks'. We are living far too much the reality of a politically correct world. Fortunately, we don't need heroes yet, but characters yes.