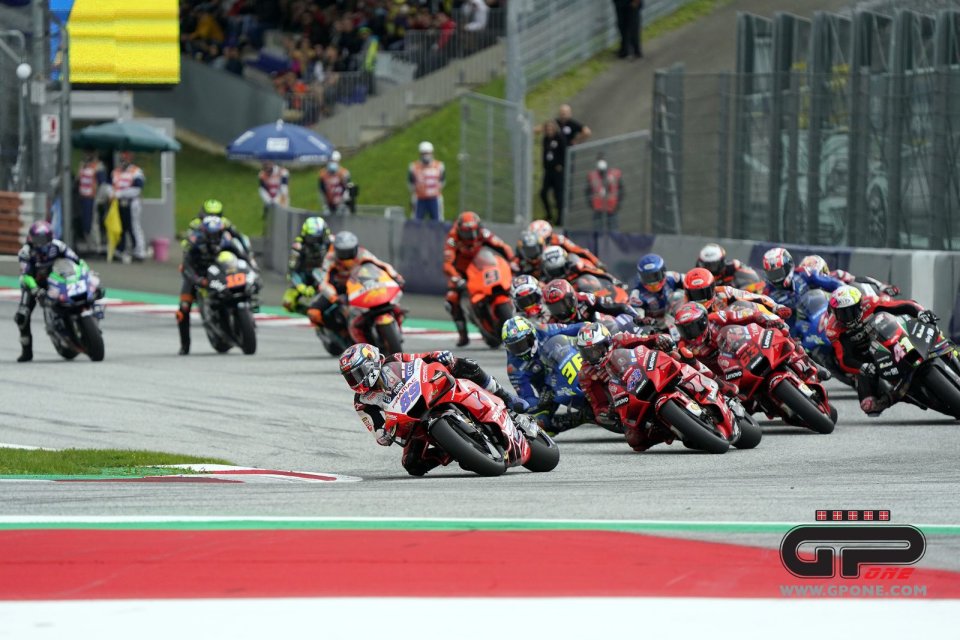 Suzuki (internally) announced its withdrawal in Jerez by communicating it to the team and to the managers, but it wasn't formalized.

Dorna, organizer of the MotoGP that stigmatizes Suzuki’s misbehavior, as it fears penalties, but with nothing at hand, because there is no statement from the constructor in Hamamatsu.

A cowardly engineer or a manager of a competing constructor who passes along a sheet of paper reserved for a colleague, declaring the Ducati’s irregularity for having made Bagnaia race (and win) in Jerez with irregular pressure in his front tire. We are well aware – and this is the serious point – that today, thanks to a gentleman's agreement, there is no sanction because the regulation is still being drawm up.

Three aspects of what today is, unfortunately, the MotoGP, a.k.a. poor professionalism.

The first case is serious, because any piece of news is either an uncontrolled rumor or it’s true. We expect a structured constructor like Suzuki to respond. But we all know that, in motorcycling, in the recent past, a company like Aramco hadn’t given an official statement to deny a supposed sponsorship.

The second is bizarre: Dorna's position confirms the truthfulness of the news but, in doing so, they confirm that they hadn’t yet heard anything about it and played it safe by promising sanctions. Truly embarrassing …

The third case is a demonstration of what Albert Einstein once affirmed in an aphorism: "two things are infinite: the universe and human stupidity". In fact, what’s the point of accusing a competing  constructor of irregularities knowing that they won’t be punished because a rule is still being defined?

The fathers of Latin would say: “nullun crimen sine lege”. This principle is now also enshrined in Article 25 of the Constitution, under which no one may be punished except by virtue of a law that entered into force before the act was committed.

Three examples that in an indisputable manner, however, demonstrate how, in the highest Formula of motorcycling, namely the MotoGP, there is a lack of adequate management. This is true at all levels, but, above all, at a sports level. If, in fact, the Championship is organized in an excellent manner by Dorna, even with the inevitable flaws and distortions that occur with any form of organization, Constructors and Teams (not all) are still at an embarrassingly amateurish level. And the fact that we don’t see the brands of major sponsors in the MotoGP, except on rare occasions, is a confirmation of this.

Right, because what result did the (pointless) arrow aimed at Ducati by the unknown engineer or manager achieve other than to cloud the waters and cast doubts in the minds of possible sponsors regarding  the regularity of the Championship and the professionalism of its  participants?

After all, whistleblowers have always existed, from Judas on, but ours are like motorcycling: rather unprofessional. They hint at it, but they don’t reveal the most important fact: there’s a rule, you’re invited to stick to it, but since the control method is still being implemented, there’s no additional sanction.

If you look closely, it’s a bit like the case of Ducati’s famous, or infamous, front “shapeshifter”. It responded and responds to current rules, but the competition didn’t like it, so they decided to ban it on the basis of the vaguest of reasons: an increase in costs, with a smidgen of safety, which never hurts. All this, however, without modifying the regulation, which allowed it.

We should emphasize that, in this case, it was necessary to resort to the “king's opinion”, meaning Dorna’s intervention, when it shuffled the cards because, by regulation, the MSMA must reach a decision unanimously.

In short: quousque tandem abutere, Catilina, patientia nostra? (When, O Catiline, do you mean to cease abusing our patience?)

So tell us, MotoGP managers, when will you cease to abuse of our patience by behaving with such lack of professionalism  and, may we add, intelligence? Yeah,right, because we like investigative journalism, digging up dirt, catching those who cheat with their hands in the cookie jar. Yet cases like the previous three do nothing but reinforce the impression that, in motorcycling, there’s still a certain shoddiness or, worse, internal conspiracy theories arise which state that the MotoGP is all show. Otherwise, how can it be possible that a champion wins one time and ends up 10th the next? All this flood of information, not false but artfully disseminated, with the aim of striking this or that, just to make much ado about nothing. Paper bombs. And it doesn’t do anyone any good

Oh, and for the record: the other rider who was caught with an “irregular” tire pressure was Quartararo, the winner at Portimão.