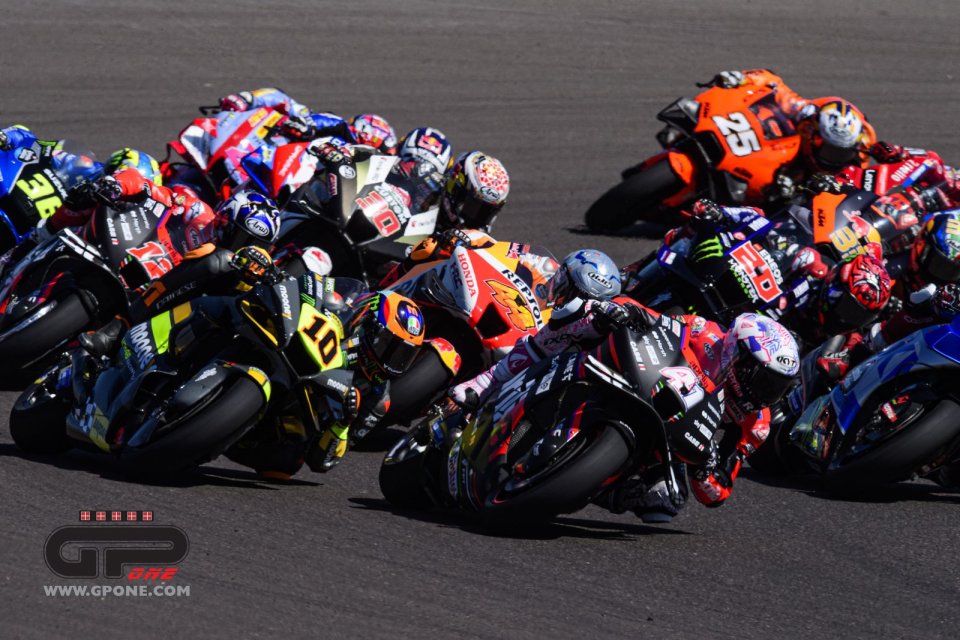 Nine different riders have finished on the podium in the first three races. This means that not one rider has scored a repeat result and that this world championship is still in search of an ‘author’.

There are those observers who, in all this, see an extraordinary sign of the high competitive nature of the championship which, On Any Given Sunday, sees all the riders incredibly close to each other, divided by a few tenths or hundredths.

That may well be… but for us it is simply a sign that the bikes that are now all really very close to each other, with the form factor levelled out by a thousand technical devices thanks to which most of the MotoGP riders - who, it must be said, come from a good selection - manage to get the best out of.

The bike/single-ECU/single-tyre/concessions system works. And it works so well that Aprilia has finally managed to take its first victory in the premier class. An excellent result which on the other hand confirms that if you put a 'pacer' in front of a group of front runners, even a modest marathon runner can keep up with the best. Let's be clear: it's not Aprilia's fault, the current rules are a kind of equalization.

But that's okay ... or is it? Because we have already seen that every flight of fancy – look at the case of the Ducati front shapeshifters – can be shot down by anti-aircraft fire from other manufacturers. Even the unanimity rule in the votes that the MSMA had given itself to prevent any technical leap forward from being blocked by a majority does not count any more: Dorna's 'super vote' in the GP Commission has eliminated it.

At this point, the only difference on the starting grid is the layout of the engines: four-cylinder in-line or V-shaped. Hmmm…not very much to be honest.

But, they say, in that way the show gains from it. To be honest, it doesn’t look that way to us. And today we are faced with a world championship standings whose leader is, deservedly, Aleix Espargarò, with just 45 points. A rider who is always fast in practice but who hasn't picked up much in the way of results in his career: this was his first MotoGP victory.

Behind him are Brad Binder and Enea Bastianini.

And the world champions… where are they? Well, Marc Marquez is at home, as everyone knows, although we won't be surprised to see him again in Austin next Sunday. Indeed, his social media post sent everyone into fibrillation. Then there is the outgoing world champion Fabio Quartararo in fifth (at -10 points) behind Alex Rins and Joan Mir in sixth (at -12).

Marc, we were saying, is fifteenth 34 points from the top after missing two out of three races.

And then there those who are Missing In Action: Jack Miller (11th), Morbidelli (12th), Vinales (13th), Bagnaia (14th). All riders who have won Grand Prix, not bit players.

So explain to me: are you rooting for the best or for the outsiders? Do you want champions to fight against each other or are you satisfied with always seeing different winners about which the general public, but often also the fans, know little or nothing?

Today we are praising Aprilia, which has never won a race in the top class, two weeks ago we said how cool were the KTM guys who never appeared on the radar during the winter and at the first round of the championship we were tearing our hair out for the previous year's Ducati which in the hands of Enea Bastianini in Losail produced a fantastic race.

In the meantime, everyone is having their flashes of glory: Darryn Binder from Moto3 on his debut, Luca Marini, Marco Bezzecchi. The only certainties at the bottom of the group are Andrea Dovizioso, Raul Fernandez and Remy Gardner but we don’t think we will have long to wait: that glory will come for them too. They just have to know how to wait. In today's MotoGP, what counts is the ‘situation’: at Rio Hondo we had the cargo plane that didn't arrive, at Mandalika tyres made of wood, as Capirossi used to say. You just need to know how to wait.

Are we really sure this is the MotoGP we want? A MotoGP that makes the commentators jump like excited teenagers when a bike gets a little out of line? Because these MotoGP bikes don’t 'wiggle their asses', as Marco Lucchinelli loved to say, not at all! They have to go straight as a die.

Now, luckily here it must be said, not even crashes create any pathos. The tyres drop at incredible angles when the rider is already on the ground. Only Marc Marquez, thank god, manages to amaze and frighten us with 1980s-style tumbles. Could it be because he tries to do what no one else tries to do? Dunno, a question mark remains.

But do you remember that 2019 Spanish Grand Prix, when at Jerez Marquez was practising another sport before the disastrous (and unfortunate) crash that virtually kept him off the track for two seasons?

Now, but let's hope we're wrong, that Magic Marc no longer exists but maybe we are simply in an era of transition. Looking forward to the next phenomenon perhaps?

P.S. Don't pretend you don't understand: MotoGP with a noose around the neck is of no use to anyone. It’s too bizarre. Apparently it is more difficult to set up than ride. It is made for all the manufacturers to enjoy, one at a time…