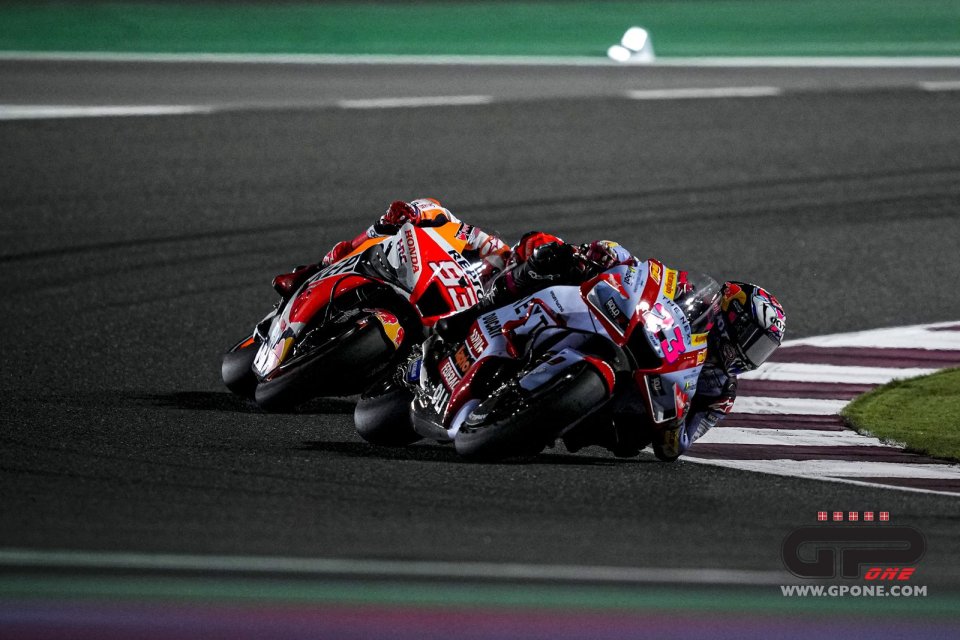 Those who were worried that the world championship would lose its attraction with the retirement of Valentino Rossi, found the answer in the Losail hat-trick of wins by Bastianini, Vietti and Migno. And we don't even have to go too far to find another one: it was 2018, at Misano and then it was Dalla Porta, Pasini and Dovizioso who triumphed in the three displacements.

Looking at the statistics reminds us of another distant date: the 1996 Malaysian GP: at that time the race was at the Shah Alan circuit and Luca Cadalora won in 500, Max Biaggi in 250 and Stefano Perugini in 125.

We have to leaf through the book of time quite a bit backwards, but that was the last moment in which we found ourselves with three Italians leading the world championship in three categories. And a further glance at the rankings reminds us that precisely on that date Valentino made his world championship debut in 125, with a sixth place.

The long wave of Italian champions in motorcycling is inexhaustible. There may be times when the wind drops, but then it starts blowing stronger than before.

So many pages, between the folds of time… Bastianini's victory, in fact, also reminds us that the Gresini team has always come out of tragedies: Sete Gibernau won at Welkom in 2003, after the death of Kato and Michele Pirro triumphed in Valencia in Moto2 after the tragedy of Simoncelli.

This now elderly scribe of motorcycle racing is surprised by all these coincidences and perhaps there would be others, if only I had the desire for further time travel, but sport must be experienced in the present. We forget the joys, even the sensational ones, as well as the intense pain, which however remains as fixed in the mind as memory.

For this reason we must treasure the victory of Migno, which is the success of a rider who has reaped less than he has sown and who is one of the nicest guys in that Academy which is Rossi's real competitive legacy. More than his nine world titles.

Because it should not be forgotten that Pecco Bagnaia and Franco Morbidelli, as well as the other Losail winner, Celestino Vietti, were born not so much at the Ranch as together with the Ranch. In a playful and familiar environment that reminds us of that of ‘70s motorcycling, where common training was not flat track, but the race behind the skirts of the groupies who, with the paddock open, crowded the circuits of the world championship when it was still called the Continental Circus and the 'school' was held in the small groups of people around the most victorious riders, strictly in silence, listening to the tales of Grands Prix on tracks with Francorchamps, Anderstorp, Imatra, Abbazzia, where today no sane rider would dare to head out and do some laps.

So this 2022 World Championship got off to a good start, but not so much or just because we Italians won everything. It would have been the same, perhaps, if any rider of another nationality had ended up on the top step of the podium.

What fascinates us, in fact, are the stories: a young guy like Enea Bastianini who overtakes Marc Marquez and other more experienced riders, without a flaw, and heads off for the win deserves a story. And if Nadia Gresini, the first woman team owner, celebrates by crying on the podium, it's almost a fairy tale. It won’t bring back Fausto Gresini, but she reminds us of the best of him: as a rider and as a manager. A man with a clear vision and goal.

Stories. These are what make motorcycling great. Then, of course, serial winners are needed. Those champions who repeat the feat Sunday after Sunday, because one-off victories don’t strike the same chord with the general public.

The fans want riders to love and, alas, also to hate but if cheering against is sporting, I see nothing wrong: at the time there were factions for Giacomo Agostini and those for Renzo Pasolini and the taunts were not lacking, like that time that at Misano a banner was raised that read: “Agostini, beware of the gloves”, because the King of Kings had complained about his gloves being too tight. Thin gloves, with metal studs under the palms as the only protection, built by the Five Rings of Milan: you wore them and you felt like Giacomo.

I don't get tired of following Grands Prix, even if today's ones seem like boys to me compared to the men of that time.

And if Enea, 'the Beast', calls his two Desmosedici, Pumbaa and Timon, characters from the Lion King, I smile because when he gets on the saddle I rediscover the courage, talent, the inexhaustible thirst for victory that all champions have.

A generation leaves, a generation arrives, but the world championship always remains the same. The eyes are not satisfied with watching the races, nor the ears with hearing the roar of the four-strokes, where once there was the hiss of the two-strokes. Everything that has happened - victories and triumphs, crashes and drama - will happen again. Everything that has happened in the past will also happen in the future.

Look Valentino, what attracted you is always there. You are part of it like so many others. Other stars will shine and then, in a year or ten, we will see another comet coming from the bottom of the grid...

The Soft front will be a good solution for the less aggressive riders who need good feedback and high grip levels at maximum lean angle. The Hard...
1 day 4 hours ago

“I don't know when he'll be back. When he feels ready, he’ll come back, not before. Then he’ll have to work on his muscles, see if his shoulder is...
1 day 16 hours ago

"In the morning I was closer, but in the afternoon Fabio made another step, or rather a ‘big step’ in braking. And I was already at the limit. That’s...
1 day 19 hours ago

From the day he was born into a racing family on February 16, 1979, Valentino Rossi seemed destined for racing greatness. In this richly illustrated...
2 days 4 min ago