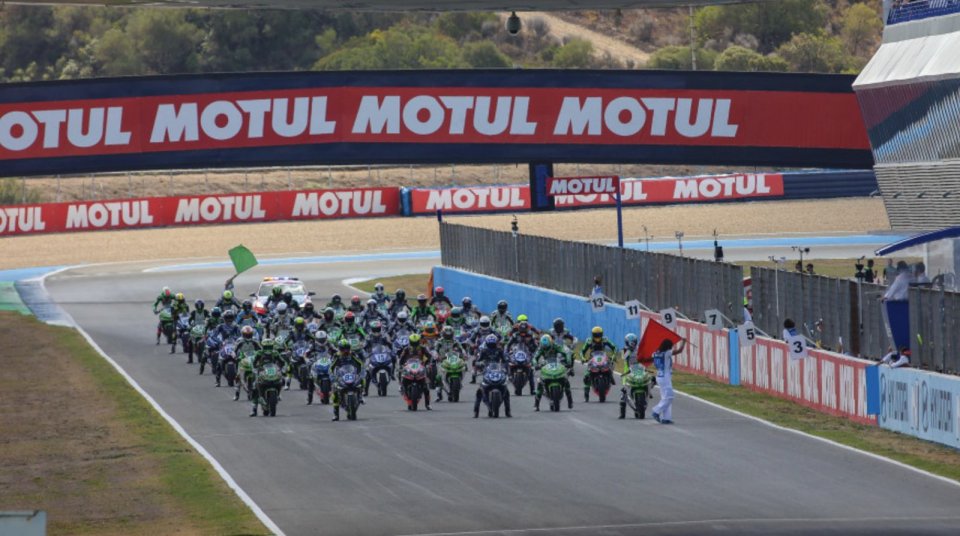 Motorcycling has never been, and never will be, a safe sport. But this can be said of other non-motorized human activities. What matters, however, is that you everything possible is always done to minimize the risks. And from this point of view in two- and four-wheeled motorsport, a lot has been done.

In the last year, however, motorcycle racing has been under the spotlight for three fatal accidents with almost identical dynamics that occurred to young riders: the 19-year-old Swiss Jason Dupasquier, at Mugello during Moto3, the 14-year-old Spaniard Hugo Millan at Aragon in the CEV 'European Talent’, and finally the 15-yearold Dean Berta Vinales, in SS300 at Jerez, during the Superbike World Championship weekend.

Making it even more difficult to endure three tragedies in a short period of time was the young age of the riders. It is one thing that made us reflect, in addition to a stricter application of the rules to avoid borderline racing behaviour, on the need for this ever-advancing race in the search for young talent. All this to fuel the MotoGP furnace.

In fact, while in the past every category had its own equal dignity, living off its own champions - an example for all: the 13-time world champion Angel Nieto, champion of the minor categories - now it seems that only by competing among the heavyweights can this be achieved.

It is wrong, of course, but 'escaping' - how else can we call it? - from Moto3 to Moto2 to arrive increasingly rapidly in MotoGP has meant the creation of many nursery championships aimed at 'fuelling' Moto3 and allowing it, every year, to churn out ‘champions’ to go before the managers of the top categories.

Dorna has professionalized motorcycling, but image is not everything

The impetus for this new way of conceiving competitive motorcycling obviously comes from Dorna, the company that manages the MotoGP world championship, World Superbike and CEV, which has become a sort of Junior world championship thanks to the FIM. In practice, the entire world supply chain is in the hands of the Spanish company.

To it we owe the professionalization of motorcycle racing, which in reality has changed a lot since its arrival: in that period people came to motorcycle racing for passion, and keeping the new arrivals at a 'low' level were the champions of the category, but today they arrive there to make a profession out of racing. Preferably very profitable. And since image comes before results, the 'riders' are all perfect, each with their own nickname, favourite number, advertising graphics and so on. This even before they have proven their real worth.

Added to this is that the various nursery championships are not fought out on unknown circuits, but in most cases included in world events. That’s something that cannot fail to make many of the champions in the making believe that they have already 'arrived'.

Too much attention favours an immeasurable growth of ego and aggression

This favours the growth of ego and stimulates aggressive behaviour, because 'many are called, but few are chosen'.

And time, much more than in the past, runs quickly!

After 20 years of age, you are already almost at the limit, to be able to take further steps forward. There's no time! There's no time! It seems to be the categorical imperative of the forge of talented youngsters who aspire to MotoGP, almost as if it is the only outlet!

The reasoning that invalidates the entire 'assembly line' of the road to MotoGP is that it always needs new faces, new characters, new stories, to attract the fans, when exactly the opposite is true: the fans grow fond of and cheer the serial winner, like the eternal runner-up, rather than the underdog.

In this, motor racing, with its many categories, is very different: F1 is certainly a beacon, but not the only outlet. This allows an approach to careers that are less exasperatedly devoted to the highest category, and if you don’t take part, it is not seen as a failure.

In this sense, a lot, really a lot of work now awaits the FIM of Jorge Viegas, himself a former private rider who should be familiar with all this, and whose task is to promote the sport of two wheels in its entirety, not only as a precursor to MotoGP.

Although it is true that Dorna acts out of interest, and in some cases its private interest coincides with that of motorcycle racing, we must reason about the fact that this is not always the case.

The task of the FIM does not stop there: it must professionalize, right from the minor categories, the judges called upon to check the behaviour of young riders. This is to prevent bad habits in the top categories from being taken as an example by young sportsmen in the training phase of their career.

Uncini and unavoidable accidents: intervening on the conditions that have made them more frequent

It might be true what Franco Uncini said, that a certain type of accident in motorcycling is inevitable, but where it is necessary to intervene is on the conditions that have made them not so much possible, but all too frequent: an excessive number of starters, incorrect behaviour that is not stigmatized and also (why not?), an excessive equalization of bike performance (this too created to favour the show).

It is simply not true that with bikes with equivalent performance the growth of champions is favoured: talent and commitment always emerge. We must have the courage to slow down the assembly line of champions, so that in this way we will not only have Spaniards and Italians on the starting grid.

And now let's have a look HERE at what the transitional categories are.

VIDEO - Pol Espargarò in hospital, will not take part in FP4 and qualifying...