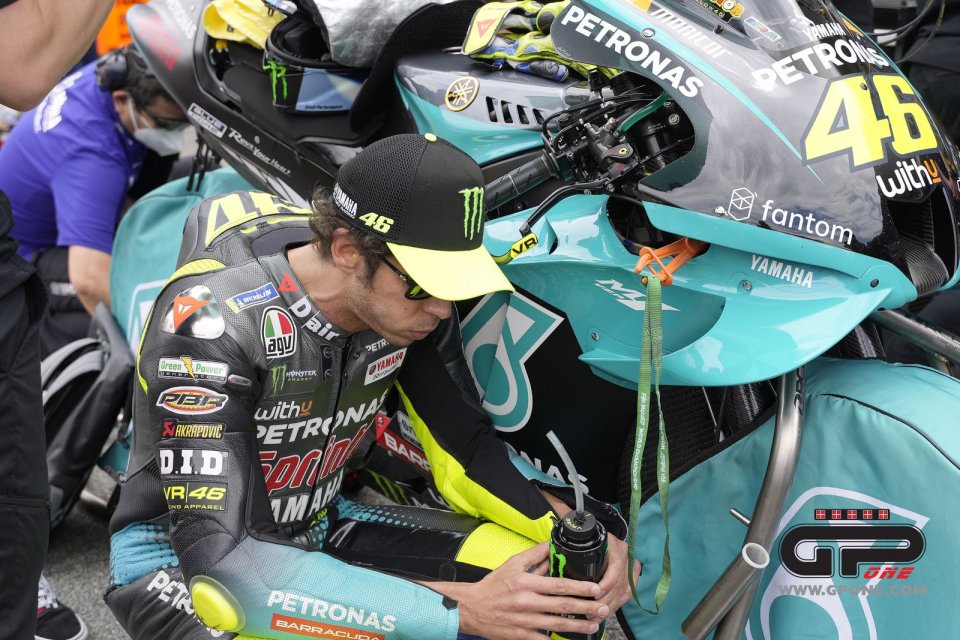 If it weren't for the fact that two of his three brand mates did worse, it should be said ‘come on Valentino – who finished in 14th place 22 seconds behind the winner, Marquez and 15 behind Quartararo – this sort of thing is not for you. Like Gaius Valerius Catullus I would launch this exhortation:

“Sad Valentino, stop being foolish, and that which you see to have died may you consider it lost”

The fact is that the sunny days (the continuation of Catullus' poetry) have ceased to shine even for Franco Morbidelli and Maverick Vinales, respectively last and next-to-last, so this is not about you, but about all of you: you, Franco and Maverick. Yamaha no longer loves you and it's understandable, the young Frenchman has stolen its heart. But while destiny is sealed for Vinales and Morbidelli - a pageboy destiny - for you, Vale, it's different. You are a king and you could reinvent yourself by deciding to end your career with your team, together with your brother, Luca Marini. And it would be a nice way to wrap things up.

It’s not, of course, like leaving the scene as world champion, as perhaps you would have wished, but if you think that Giacomo Agostini couldn't do it either, then, well, it doesn't seem like a bad horizon to embrace with your gaze.

Also because if you look at the standings from another angle, Valentino was not exactly ‘riveted’ to the track: like Vinales, the stop watch assigned him with 7th overall time.

Ours is not an official defence: we read the numbers and they are not the ones that your age - 42 - suggests to us. Perhaps, indeed certainly, Rossi is no longer a lightning bolt in the qualifying lap (he actually never was…) but he doesn't deserve to finish in this way.

"The warm up had given me a good impression - he said today after the race - I started optimistic for the race, I wanted to make a good start, but I didn’t do it and here it is difficult to overtake. In the last stages of the race I improved and so I also enjoyed myself. I just needed a good start because I was starting from the sixth row ”.

Rossi: "More than overtaking, with the Yamaha you have to be careful not to be overtaken on the straight"

An analysis of the ranking confirms Valentino's words.

"At the end I lapped in line with the time of the leaders, in 1’22: I had the track free for six laps in all ... Today Franco and Maverick also struggled. With the Yamaha, if you start from the back it's difficult, we have to ride differently and we are slow on the straight. To overtake you have to get very low, push hard under braking… but while overtaking you have to be careful that they don't overtake you ”.

“Fabio is very fast and is leading the championship. And he is able to keep the problem under control and start in front in every race ".

And this makes the difference. "Maybe something will arrive for Misano, but more than anything else it will depend on the tracks. More or less this is the package. I like Assen, next week, on paper it’s a good circuit for the Yamaha but the first thing is to hope we have good weather. Our situation is difficult, especially in the race because I know Vinales well from having him alongside in the team: he is very fast and full of talent ”.

At this point, we would like Rossi to continue his adventure with Ducati. With his team. Because it would be the right way to close the circle. We told him that, but we explained ourselves badly and Vale replied that "we are the usual journalists who would like the news immediately" and that he "has made the commitment and I will tell you what I will do in the summer break".

From someone whose career has been marked by the phrase “Imagine if you hadn't tried”, we don't expect him to do anything else. Again. But don't dare to ask him what he thinks of Marquez's success at Sachsenring, you would feel in the answer that Vale's grudge is still strong.

In a few years, starting from now, we will talk about Agostini, Hailwood and Valentino Rossi and our judgment will not be based on the number of titles won…