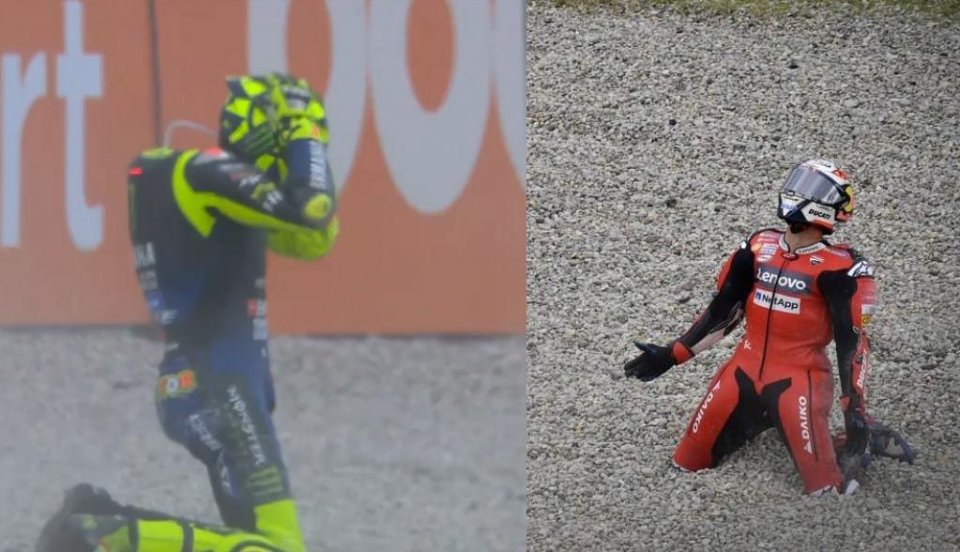 There are two, maybe three, moments of maximum risk in a Grand Prix. The first, of course, is the ‘hell-for-leather’ lap in qualifying…

There is no balance that holds when looking for the limit by shaving the devil. It is the only moment, perhaps, in which the best riders switch off their brains by completely relying on instinct. They all try and emulate Luke Skywalker when he turns off the onboard computer of his starfighter to launch the missile and hit the target.

Focus on the moment. Feel, don't think. Use your instincts… And may the Force be with you!

The second is probably the start. That very long moment in which, with the helmet visor down, the riders wait for the traffic lights to go out and then head for the first curve like in a stampede.

It is proved by statistics: the ones in the last rows risk the most. It is the Bronx of the starting-grid, the place where you can be stabbed at any moment.

The third moment, probably, is when you see your opponent powering away to victory and you decide not to let him go. This is a movement of the soul that belongs to logic and yet escapes you because you mistake the certain for the uncertain. Like at a Texas Holdem table when you gamble your entire stake…

The true champion gambles everything in the first, in order to avoid the second, thinking that instinct will keep him from doing something stupid in the third. But it's not always like this.

Fear is the way to the dark side. Fear leads to anger, anger leads to hatred, hatred leads to suffering.

Sometimes we make mistakes through our own fault, and we have to accept them; others because it’s the fault of others, but we have to think about whether, in some way, we are responsible for what has happened to us.

This reflection is a consequence of the same, yet different, destinies of Valentino Rossi and Andrea Dovizioso in today’s Barcelona GP.

The former crashed for trying, the latter for finding himself in a situation where he shouldn't have been. But this is racing. A container into which - from Thursday onwards - you start putting something, but it is always the last straw that breaks the camel's back.

Vale and Andrea were chasing different yet equal dreams in Barcelona. Rossi a tenth title, Dovi his first in the premier class. And Montmelò was probably a turning point. Unfortunately, as Ernest Hemingway said, ‘at the most important crossroads of our life there are no signs’.