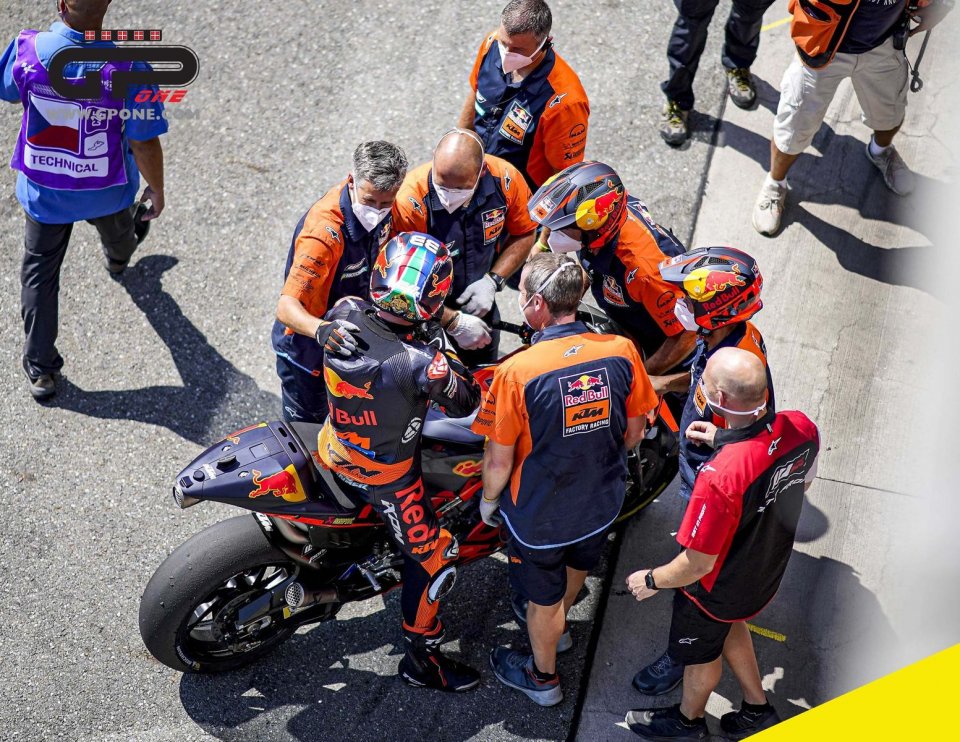 If. You should never start a sentence with a hypothetical conjunction, but it is the first one that came to mind when Brad Binder crossed the line with the KTM in the Czech Republic GP.

It is unfair and ungenerous for riders fighting on the track to think of the absent Marc Marquez even when a rider and a manufacturer reach such an important and coveted milestone – a first victory in MotoGP - but when Binder gave South Africa and Mattighofen this historic success we couldn't help but think about what race we would have seen with Marc on the track.

At Brno, up at the front, there was the shadow of Marquez on the run

Let's clarify things immediately: history is not made with ‘ifs and buts', and Brad today retraced the footsteps of two very tough champions like Jon Ekerold and Kork Ballington, but it seemed to us - condemned as we are to follow the races remotely - that what we saw was the Grand Prix of the ‘rest’. Almost as if, up there in front, all alone, the shadow of the world champion was on the run.

After all, Binder won with a slightly higher time, in the realities of 2018 and in view of 2019, when it was held over a slightly shorter distance, than the victories of Dovizioso and Marquez. But it is also true that these direct comparisons cannot be made since, in addition to the condition of the asphalt, the tyres and temperatures have changed.

It is also true, however, as we are rightly told, that each world championship has its own history, and this will be no exception.

What we have seen in these first three, unusual, challenges is however enough for us to express some judgements that we do not consider risky and that, in order to arrive at a difficult summary, we will try to give in a few lines.

Quartararo & Morbidelli, the new kids on the block. And there are also Binder and Bagnaia

The riders who have positively impressed us the most are the two from Petronas, Quartararo and Morbidelli. They have both grown and will continue to grow. It’s a judgment that we feel we can also make about Pecco Bagnaia even if he is haunted by bad luck. They are the new kids that, ineluctably, are taking over the block. At Brno Fabio got quite a lesson from Franco, and it is difficult to understand how much and if this was due to the different choice of rear tyre, soft for Morbidelli, hard for Quartararo. Binder was expected to explode sometime. We will see in the next two Grands Prix, which will take place in KTM’s backyard, if this result will be confirmed, both on a sporting and a technical level.

Dovizioso and Petrucci unrecognizable: in the garage they are now telling them to ride like Bagnaia and Zarco

The riders who unfortunately impressed us the most in the negative sense are the Ducatisti 'DOC' pairing of Dovizioso and Petrucci. It is true that Andrea has scored a podium, but at the moment he no longer looks like the pack leader of Borgo Panigale. And perhaps this reflects his difficult contractual situation. To hear him say that Bagnaia brakes better, or to hear Davide Tardozzi who says that Johann Zarco, like Pecco, rides the Desmosedici better with the new Michelin is equivalent to a rejection. Obviously, in the year of the greatest opportunity for the Bologna-based manufacturer, all is not lost. The points behind the leader, the Frenchman of the Yamaha Petronas team, are only 28. And it is pointless to repeat that the next two Grands Prix will take place on the Red Bull Ring freeway in Austria where Ducati has dominated since 2016. We would not be surprised if Dovi ended up by leading the world championship by the Misano GP.

Sure, he will have to kick himself awake, also because it would be really too much if the red bikes once again finished behind the orange once they arrive in Styria…

Rossi's competitive ‘winter’ and the usual ups and downs of Vinales

Among those about whom our judgment is still suspended is the pair of factory Yamaha riders. Maverick Vinales still alternates great performances with colourless races, so nothing has changed there, while Valentino Rossi, extraordinary in his competitive ‘winter’, pays the price for not being able to be incisive in qualifying. But from a mathematical point of view he is there with the points.

Two men who have not yet picked up what they deserve, however, are Alex Rins and Pol Espargarò. For different reasons. The former is not yet 100 percent fit, while the latter is paying the price for an aggressive and not very profitable race management at times.

And then there are the over-odds, those riders, certainly fast, but on whom you would bet with great difficulty. We’re talking about Jack Miller, but also about Johann Zarco. Both, riding a Ducati that is difficult to interpret this year, are called upon to offer more consistent performance. And this explains why Ducati is taking so long to choose its (new?) leader.

Just a few more lines to talk about the manufacturers on the track.

Yamaha leads the world championship but keeps quiet about its engines

Yamaha has three bikes in the top three positions of the championship, but its engine situation is becoming a bit of a problem, about which it has yet to lift the veil. However, from a strategic point of view, it certainly has the best teams. Lin Jarvis has been very good at what he does.

Honda, unwatchable without Marquez, pays the price for too many bad decisions

Talking about Honda, on the other hand, is embarrassing. What’s happened to the squadron created by Livio Suppo? In the hands of Alberto Puig, with Marquez absent, it has ended up behind Yamaha, Ducati and even KTM. And we fail to remember the time two Repsol-Hondas started from the last row of the grid in a Grand Prix. And at the moment their best rider is Nakagami…

Ducati, you must decide, but look ahead!

Ducati is difficult to judge. In other words, it is impossible to understand how many of the current problems stem from the bike and how many from the riders, taking for granted the difficult adaptability to the new Michelins. That said, two third places, one with a satellite team, is an unacceptable performance.

KTM has grabbed the ... bull by the horns

KTM, on the other hand, has truly made a leap forward, the credit for which certainly goes in part to the contribution as a test-rider of Dani Pedrosa, whom HRC, on the other hand, should have rewarded with a life contract, if not as a tester but as a consultant. The Austrians were in fact inspired by the RC213-V both in the design of the engine and in the aerodynamics. They remain faithful to their tubular steel frame, which however today has a deltabox-like structure and White-Power suspension. Anyway, hats off!

A step forward, but not a leap until proven otherwise, for Aprilia, orphan of Andrea Iannone. Finally, Aleix Espargarò has finished a race, and that's what they needed at Noale. All without having a generous sponsor like Red Bull behind it.

Last but not least Suzuki: they have been so unlucky this year, but the bike is there. And let's not forget that they are the only team on the track that doesn't have a satellite team. By now we know how important it is to have more data.

The rest remains to be seen. And to go back to the initial ‘if’ team, we can't wait for the defending champion to return to the centre of the ring. He may not win the title this year, but we are sure he will be the benchmark for everyone again. Defeated, but not beaten.

“Since Austria I’m not able to be fast on the straight. I couldn’t keep up with Bagnaia today. The first round? Pol slowed down, and I touched him. I...
9 hours 30 min ago

"The weekend started in the right way; in the race I was able to push while managing the tyres." Di Giannantonio: "This podium is a great boost for...
2 days 35 min ago

“There’s no grip and it’s impossible to be aggressive. Getting ahead of the Yamahas at the start will be essential, as will not overheating the tires...
2 days 20 hours ago

Xavi is currently racing in the FIM CEV Repsol with the Leopard Junior team and right now leads the classification after two victories and two second...
3 days 7 hours ago

"I don't have good sensations; I can't find grip on the rear". Crutchlow: "my ankle is fine but my arm has the same problems as before the operation"
3 days 20 hours ago