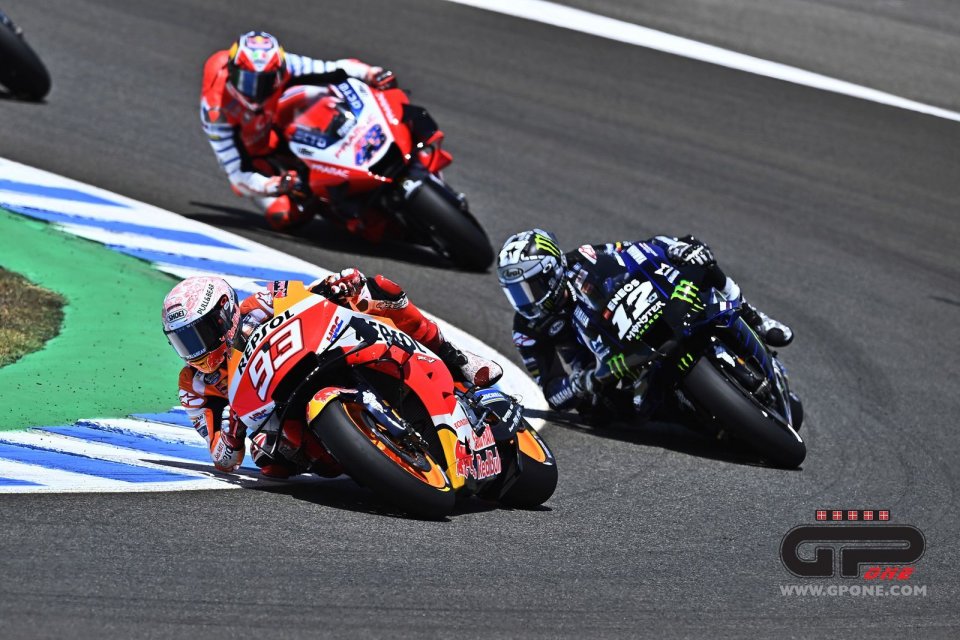 No margin. That’s how champions race. Or maybe it would be better to always keep something in your pocket to avoid any accidents?

To be honest, we are unable to give the answer, seeing as we have known fantastic riders from both trains of thought.

Giacomo Agostini and Eddie Lawson on the one hand, Kevin Schwantz, Wayne Rainey and Marc Marquez on the other.

Let's make things perfectly clear immediately : we are talking about champions, that very limited category of racers who even when they have the win in the bag do not slow down but, as if in a competitive trance - as Livio Suppo correctly used to interpret it - go berserk (as the Anglo-Saxons might say) or, as we say in Italian, continue to go on the rampage.

How many more than 25 outright Grands Prix wins would #34 have achieved if he had only been calmer and avoided injuring himself so much? And Wayne - had he thought more about his career instead of always riding round the problems - how many more than 24 would he have obtained?

A lot more, we feel sure. On the other hand, we immensely admired Giacomo’s competitive intelligence and Awesome Lawson's cold logic that made them roll off the throttle when they dangerously approached the 100% that was the limit.

But, as we said, we are talking about the MotoGP elite. Because while there might be some riders who always keep something in their pockets, they certainly don't explore 100% of the bike they have under their ass.

These are the ‘computers’ of racing. Some of them are good, indeed very good, and they are the ones who could win or could have won more races and titles if only they had really been able to take advantage of the technical material available to them. But that was their limit. It's not that they kept it in their pockets: they didn't have anything there.

We’re not interested in naming names. The fans know who were are talking about. They are the ones with the bike that always had something that prevented them from getting one hundred percent from it. And sometimes it was true, for heaven's sake, but in their own box the engineers, technicians and mechanics knew the truth.

But let's talk about the first Grand Prix of this unfortunate season that has only started now with an ugly and compressed calendar that is justified only by the need not to cause the collapse of MotoGP economically.

It was obvious that it was going to be 'knockout' world championship, because when you do so many races one after the other, even on the same track, after such a long stop, the risk of getting hurt grows exponentially.

So, not surprisingly, Alex Rins and Cal Crutchlow failed to race in Jerez, and then Marc Marquez also got injured. Could this have been avoided?

Let’s be fatalistic, we don’t think so. Races always involve a certain amount of risk and ‘roll of the dice’, but it could have been avoidable to run so many races one after the other. Think about it: after Jerez 2 on 26 July, there will only be one Sunday free, on August 2, then on 9, 16 and 23 MotoGP will compete in Brno and then twice at the Red Bull Ring. Five Grands Prix in six weeks.

If they were horses it would probably be forbidden to subject them to such stress, but they are only riders. And the International Federation has never given a toss about the riders. Only once did it give a toss and didn’t pay them, that was the time when everyone went around in campers and called themselves the 'Continental Circus'. Today at least they are paid, but what drives the whole bandwagon are Dorna's TV rights and the show must go on stage, whatever the cost.

Obviously, this year the situation was such that what has happened was inevitable. Yet we believe that while understanding everyone's needs, the show could have been better organized.

Let's go back to an old idea of ​​ours, but never as at this moment has such an absurd calendar deserved a reintroduction of the discarded results rule, because while it is true that a champion wins also by averaging out the points and the one who makes the fewest mistakes is the best, it is also undeniable that with three Grand Prix races in a row, even hurting your little finger rules out any chances of overall success. And on 280 hp motorcycles you don’t only risk your little finger like in the times of Phil Read and Barry Sheene, who also risked them but for other factors...

So let's say that we admired the amazing comeback of 'Magic Marc', but it is regrettable that the world championship has lost its main protagonist so early.

Because if the Spaniard does not return to his bike soon, whoever wins will only have half a trophy in his showcase.

Unless, of course, Marquez returns, gives battle as he alone can do, and offers his opponents the chance to redeem themselves.

Because after what we saw at Jerez, to be honest, with only Quartararo taking the honours, and Jack Miller showing his attributes, everyone else should tear up their license…