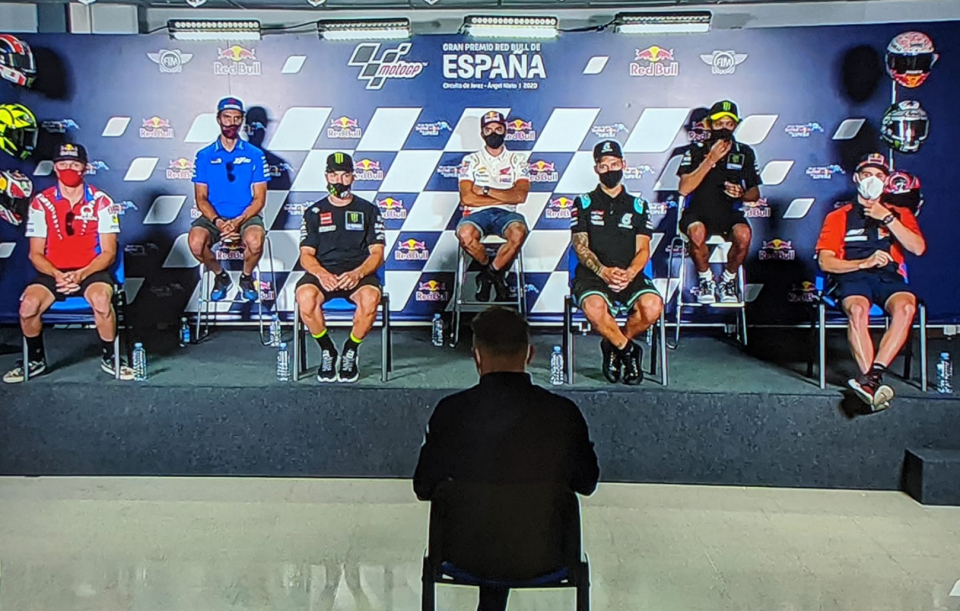 To be (there), or not to be (there), that is the question… To paraphrase Old Bill, who wrote like a God and knew a lot about the human soul, we asked ourselves the same question yesterday, when we decided to publish the news of the firefighters' intervention on Zaccone's MotoE bike.

The news was a dead cert: Speedweek had been informed about what happened by a mechanic present at Jerez in the evening, so we went by deduction: if a firefighter, who is supposedly trained, decides to do his job, it means that there is danger. So, it’s real news but, alas, there was no possibility of making further exhaustive checks.

After some time, not a little, everything was denied: there was no fire, the Energica technicians had checked the bike after the crash and everything was fine. Sure, that’s fine but who knows for whatever reason, why the firefighters "as a precautionary measure" had decided to intervene to "cool down the battery".

At this point, without any haste or anxiety, the explanation of the various PRs followed, which obviously had to be published but, alas, there were obviously no images. And since there is only a small number of 'chosen' photographers on site, you will excuse us if we started to think about the Red Bull Ring immediately, last year when, for a similar case, the men from Dorna wanted to prevent us from taking photographs, even if at a safe distance.

So it wasn’t 'fake news' after all, as our friend Gresini had reported in his press release. Only correct information from behind an iron curtain. After all, if the news is not immediately reported by those who should do it AFTER it came out, there are two cases: either the person who should give information was asleep, or it was believed (wrongly) that since there is no press on site, one could pretend that nothing had happened.

These are the facts, so the good old journalist from behind his desk made a couple of calls to friends in the paddock and no, they were not present at the event but it is true that there was a little smell of burning… It is not true that where there is stink, there is fire. Not necessarily, and we take the information that has been provided to us as totally true… it’s just a pity that we have not been able to verify it completely.

This morning, on Twitter, there are videos of the streets of Jerez, crowded as usual, full of motorcyclists letting off steam for their passion on one wheel. No sign of social distancing and, we presume, knowing our Andalusian friends, rivers of beer.

So what’s new? Nothing: Carlo Pernat said to us in our last live broadcast that the fans would remain outside the circuit but not from the streets of Jerez. After all, in the absence of a police state what would you have done if the race had taken place at Mugello? Would you have given up on a ride on a motorcycle, a Fiorentina T-Bone steak with a bottle of Brunello di Montalcino just for the pleasure of hearing the roar of the engines up the Arrabbiata? Neither would we, so we would have gone. So what's wrong with that?

It is strange however that to check on this, once again, we had to phone a friend who is in Jerez. Is it true that there is a lot of motorbikes on the street? Yes, there are motorbikes, but I haven't checked how many because I didn't go to the city. We are ‘locked down’ here.

We are interested and curious about this because we really do not see any difference between gathering on the grandstands of a circuit or gathering along the pavements of the town.

The only tangible and incontrovertible thing is that we are not in Jerez and therefore we really cannot inform you the way we would like to or do anything more than gather information from outside.

Then you view, or rather, review the press conference you attended via Zoom and you cannot but agree with the #gponers of the first hour - Alice Margaria - who with her usual wit in that photo sees something completely different and writes on Facebook: With all due respect ... this is somewhere between an ISIS conference and a bondage webinar…

Worse than that was only the F1 podium with robots handing over the trophies.

And so two thoughts come to mind, in rapid succession: but if all of these people have done a swab test, who on earth are they going to infect? And also: we must all become extinct, because if appearance matters more than substance, there is no longer any reason for us to still be here.

DISCLAIMER: this is not meant to be an article to say that Energica lied, nor to say not to wear masks and not implement social distancing. Covid-19 is with us, we are not talking about chemtrails. We just have to decide what matters most, appearance or substance.

Just by chance, journalism actually serves this purpose: seeing, asking, verifying, and writing. About higher aspects like MotoGP. Without investigative journalism, present where the facts take place, there is neither freedom nor truth.