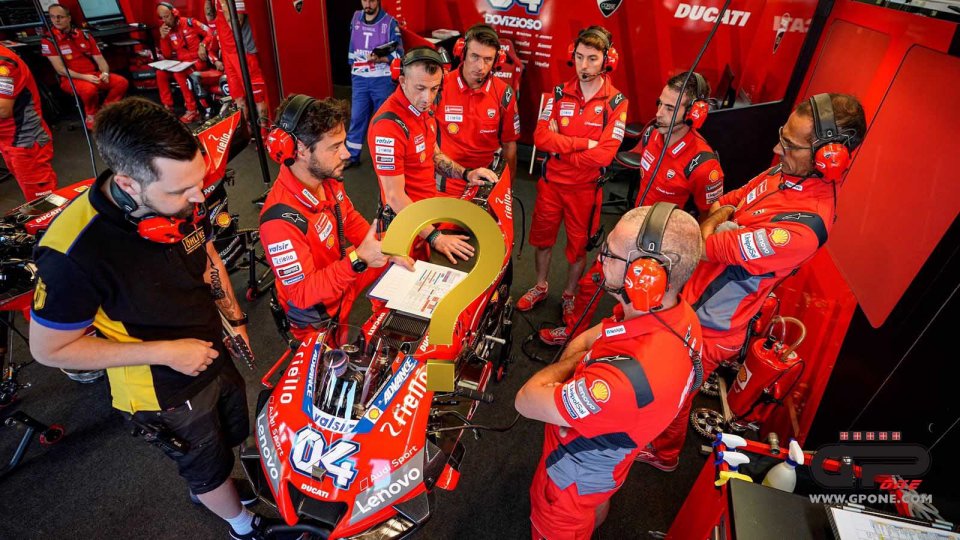 "We cannot give ourselves courage," wrote Alessandro Manzoni justifying one of his characters in a passage from Chapter XXV of I Promessi Sposi (The Betrothed) and it is what Don Abbondio wonders to himself at the end of his conversation with Cardinal Borromeo.

Now replace Manzoni with Ducati and I Promessi Sposi with the rider market and you will have the exact situation of the Borgo Panigale manufacturer, which, after arriving late at the party with its decisions from the very start, today finds itself wrapped up in long and unnerving negotiations with the only title-winning rider it has in its squad: Andrea Dovizioso.

On paper, with a competitive bike, it should be holding the sharp end of the knife, but that is actually not the case because after losing its grip with Vinales, not having demonstrated enough strength to tear Quartararo away from Yamaha and not having even dared at all with Marquez, it now finds itself with the scraps – hopefully those directly involved will forgive us - and only one 'eligible' rider: Dovizioso, in fact.

A situation that in Borgo Panigale they are managing by gripping the blessed knife even tighter: but on the side of the blade.

This is because in Ducati they persist in wanting to unearth the talent that will help them again win the world championship title they won fortunately - but deservedly - in 2007 thanks to the unexpected blooming of a very fast rider who the year before on a satellite Honda had luckily shown what stuff he was made of.

The result today is that Ducati does not have any real alternative to Dovizioso and while it cannot be denied that Dovi does not have any real alternative to Ducati, he can put a lot more pressure on them because Ducati has to race. And race to win. The man from Forlì, however, in theory, could even decide to stop or dedicate the last years of his career to developing a motorcycle.

That's why his manager Simone Battistella now holds the stronger cards at the negotiating table and can afford to push his luck: the Bologna-based team for 2021 has no one able to replace a rider like Dovizioso who, a three-time runner-up in the world championship (2017-2018-2019), from his point of view has already demonstrated a show of force. In pre-Covid-19 days, Dovi asked Ducati for 8 million Euros per season. Yeah, right! Today in Borgo they are offering three and, from their point of view, an agreement for a single season would be more than acceptable.

At this point time is on the side of Andrea Dovizioso who could even wait even longer, if it were not for the fact that this war of attrition certainly does not favour relations with the manufacturer, which are not as idyllic as they used to be.

In this situation rumours are going around - always denied of course - of a return to the fold for Jorge Lorenzo who, according to some observers, recently offered himself directly to Gigi Dall’Igna for (almost) a piece of bread…

Just idle chit-chat? It would seem not, given that the intentions of Porfuera were revealed by none other than Lin Jarvis, an Anglo-Saxon who does not like to talk in vain and who instead has masterfully carried out his part of the transfer market by virtually showing the door to the untouchable Valentino Rossi, all the while offering him an honourable fallback in the Yamaha-Petronas team.

Now, anyone who chews a bit of Grand Prix racing knows that in this world, tyres are the name of the game. If your opponent has better tyres, you can even call yourself Mick Doohan, but Simon Crafar will finish in front of you by 11 seconds, as happened in Donington in 1998 thanks to some very fast Dunlops.

The problem is that we are now in a one-make tyre regime. And the time when a Bridgestone rabbit was pulled out of the hat by Livio Suppo is dead and buried.

And so we have to tick option number 2: the rider. A good rider can have a good season, but only a champion can win the championship. The problem is that there are very few of this type of rider around and, while admitting that Andrea Dovizioso is one of them, at the moment we do not see anyone in the current bunch of active champions who can replace him.

Before you start to wrack your brains for a name, we’ll give you one: Jorge Lorenzo. But he is now no longer in activity and he would need a damned strong motivation to return to what Yamaha still think he is. Of course, surrounded by all the question marks that his fake 2019 retirement left…

But those cannot be influenced. Believing that Lorenzo, with the right bike, is a rider capable of winning is quite simply an act of faith. Obviously, he is convinced of this, but Ducati would do well to be convinced of it as well because it would then have the leverage it needs to deal with Dovizioso today. By believing that Jorge could replace Andrea it would take back the sharp end of the knife. And in this way, it would find itself, eventually and finally, free to decide if it is worth trying – after a fourth assault on the title with a three-time world championship runner-up - to go down the rabbit hole.

But as we said at the beginning ... "We cannot give ourselves courage," Or can we? Ducati, amaze us  all if you are capable of doing so…