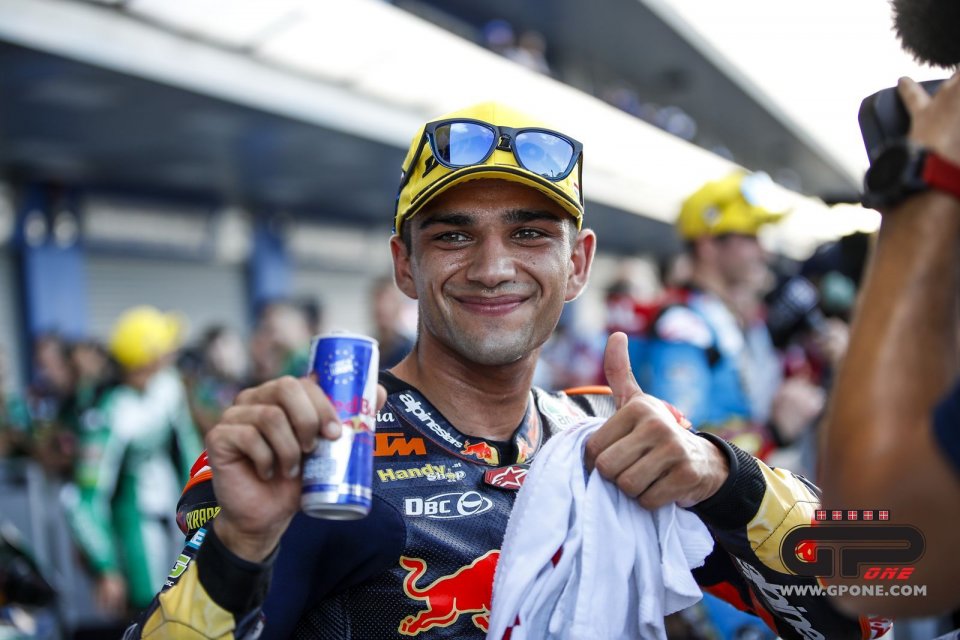 In Spain they only just discovered that Ducati has snapped up Jorge Martin to place him in 2021 in its Pramac satellite outfit, which is now working just like a 'reserve dugout' for the factory team.

Your scribe wrote this on GPOne last May 19, at the same time as the exclusive that Jack Miller would sign to replace Danilo Petrucci. Which promptly happened.

The fact is that the manufacturers have - or are - changing their strategy with regards to the near future. The satellite teams are no longer seen, as they were in the past, as structures mainly aimed at cushioning the costs of the factory teams, thanks to the payment of the leasing of the MotoGP bikes of the previous season. 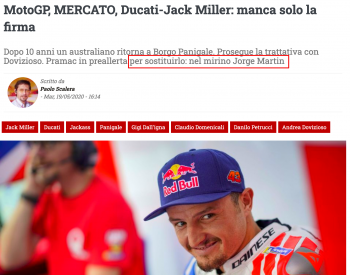 This process has gone through two phases: in the first, the satellite teams received one of the two bikes updated to the current year, delegating in a certain sense to the rider in charge of racing it the job of 'racing test rider. Then later the right to choose the riders also emerged.

To the victor go the spoils …and the burdens, i.e. you have to pay for them.

Ducati was among the first to do so, and for this reason today it finds itself with a long ‘reserve dugout’ that also includes Johann Zarco. Honda, on the other hand, is implementing this strategy with Lucio Cecchinello's LCR team, as confirmed by the manager from the Veneto recently.

What about Yamaha? Well, this year it has Fabio Quartararo, so it has also come into line.

As for KTM we believe that the philosophy will be the same, while at the moment the only non-aligned manufacturers - but only because they don't have a second team - are Suzuki and Aprilia, but as Massimo Rivola told us and Davide Brivio has repeated several times, it is only a matter of time: soon Dorna will present a new contract to the manufacturers according to which each of the participants will be obliged to enter two teams.

This entails a new policy, or rather the continuation of the current policy of the manufacturers that try to snap up the best Moto3 or Moto3 riders, before they become champions, thus creating a low-cost nursery.

This is the reason why, even in this moment of stagnation, Ducati has signed Jorge Martin, currently in Moto2 with the Kalex of the Red Bull Ajo team, on whom Honda had also set its sights; in any case, the Japanese manufacturer wasted no time and is talking to another Spanish rider.

Some observers say it is Jorge Navarro, racing this year for the SpeedUp team of that great talent scout that goes by the name of Luca Boscoscuro; the latter also has on track - albeit in the colours of the Aspar team – a certain Aron Canet who in Max Biaggi’s team in Moto3 with KTM has shown some excellent form in fighting for the world championship against the Leopard Honda of our very own Lorenzo dalla Porta. In reality his name is Pol Espargarò which has always had the esteem of Alberto Puig.

Ducati 'forced' to be aggressive on the market

No wonder, then, that Ducati is so aggressive on the market: while HRC has ensured itself a stable future with a four-year deal for Marc Marquez, on the other hand in Borgo Panigale they are convinced they have the bike, but not the rider able to propel them forward in the next four years.

While at the moment everything revolves around Andrea Dovizioso, with whom Ducati is negotiating a reduction in his retainer, but with the fear of having a rider who if not reduced in value is now close to retirement, on the other hand it still cannot put total trust in those who are sitting on the bench.

Danilo Petrucci, one win in 2019, has already been given the heave-ho, and if he were to remain, with another one-year deal, it would only be in the event Dovi quits. On the other hand, Jack Miller is a gamble, just like Pecco Bagnaia whose position would not be safe at all if he did the few 2020 races at the level of those in 2019, while for everyone Johann Zarco, wanted by Gigi Dall'Igna, in addition to no longer being very young, is also still a true unknown factor.

Here is therefore yet another Ducati gamble, the team with the ‘longest dugout’ still looking (desperately?) for a new Messi…

VIDEO - The flames spread during a day of free practice, no harm to people or structures
5 days 40 min ago

The reigning champion wins race 1 but ends up on the ground in race 2, giving the Suzuki rider his first career success. A 4th and 7th place with a...
5 days 6 hours ago

A non-stop week for the Ducati rider, beginning with the Misano tests, then a bike ride to Tavullia, and today on the Dorno track
6 days 1 hour ago

The collection will be up for auction August 15th and 16 in Bicester. The Morbidelli 250, with which Giacomo Agostini competed in Misano in 1976,...
1 week 5 hours ago