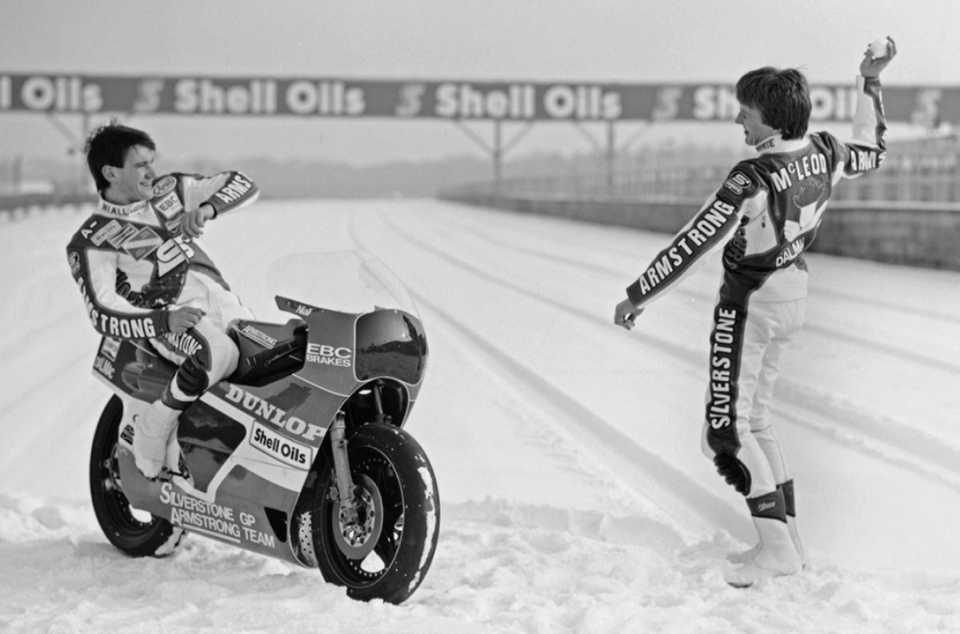 This is not the first time that the World Championship has started late, even if in this case we are only talking about the premier class, given that the Qatar GP will be held regularly over the weekend for the Moto2 and Moto3 classes.

It was 1980, in fact, when together with my friend and colleague Alberto Sabbatini, the future director of Autosprint, I left by car for Salzburg to write about the Austrian Grand Prix.

We arrived in the early afternoon and when we were taking the road that led to the Salzburgring circuit, passing under the viaduct, we realized that the situation was quite particular: on the right and left of the road there were in fact walls of snow more than one metre high. We had found snow and sleet along the way, of course, but the roads were clean. As soon as we left the main roads and entered the valley where the circuit was situated, we realized that there was a problem.

At the time, the paddock was a village. The wealthiest riders had a caravan, the rest had tents. It was a campsite, in short, and on that occasion a snowy campsite.

The track wasn't much better. And the fact that the run-off areas were not those of today made it worse because in trying as much as possible to clean the asphalt, there were mountains of snow on the sides of the track.

A few hours of meeting were enough, and the decision was made; everyone home. It was early April, if I remember correctly, so after a hot chocolate in the beautiful town of Salzburg with Alberto I went home, or to be more precise, to the editorial office at San Lazzaro di Savena, where a colleague who - during the Grand Prix – should have been our 'desk' – was waiting for us. Remember that in 1989 there were no mobile phones and no faxes, the articles were dictated down the phone or sent by telex - and of course she was more than surprised to see us come back. But that's another story.

That year, the World Championship, due to the cancellation of the Austrian Grand Prix, started from the second race which took place on 11 May at Misano. Kenny Roberts won in front of Franco Uncini and Rossi. Not Valentino, but Graziano, his father.

The season, eight Grands Prix in all, ended on August 24 at the Nurburgring, the old one, the real one. It therefore lasted just 4 months. Marco Lucchinelli won his first Grand Prix at the ‘Green Hell’.

Since then I have seen, or rather, I have witnessed all the cancellations. But here we are talking about the opening round of the championship. Because if we had to tell about all the races not held, the list would be much longer, starting from the boycott by the top riders at Spa-Francorchamps in 1979, which I personally consider to almost be the beginning of modern-day motorcycling with the refusal of the riders to race.

A situation that also came about at Imatra, Finland, for the 500 class only, in 1982 and then at Indianapolis (due to a hurricane, only the 250 was cancelled), in 2011 at Sepang for the death of Marco Simoncelli and, more recently, at Silverstone in 2018 for the conditions of the track surface which did not drain the rain.

If we refer only to the opening round, there would be, once again, only Qatar because in 2009 the race risked cancellation due to the fact that Losail had been built without water drainage and it was flooded by a violent storm. The Grand Prix, however, in a situation that was more unique than rare, was held on the following Monday. With a few complications for the teams and insiders to rearrange their travel. Casey Stoner won.

(The photo does not show the Salzburgring, but Silverstone. The protagonists were Niall Mackenzie and Donnie McLeod, at the presentation of the Armstrong team)

“I was leaning too much. It happens when you push on a MotoGP. I have injuries all over my body. I’ll have to wait and understand my condition. It’s...
1 hour 53 min ago

The calendar for next year has been set and will be made public today. After Kazakhstan, another country enters the World Championship.
8 hours 44 min ago

Pecco will have to watch out for teammate Jack Miller triumphant in Motegi and eager to score another success, the fourth in his career in the...
1 day 3 hours ago

2023 marks the start of a new five-year, Kazakhstan will also become the 30th country to host a motorcycle Grand Prix since 1949
3 days 8 hours ago