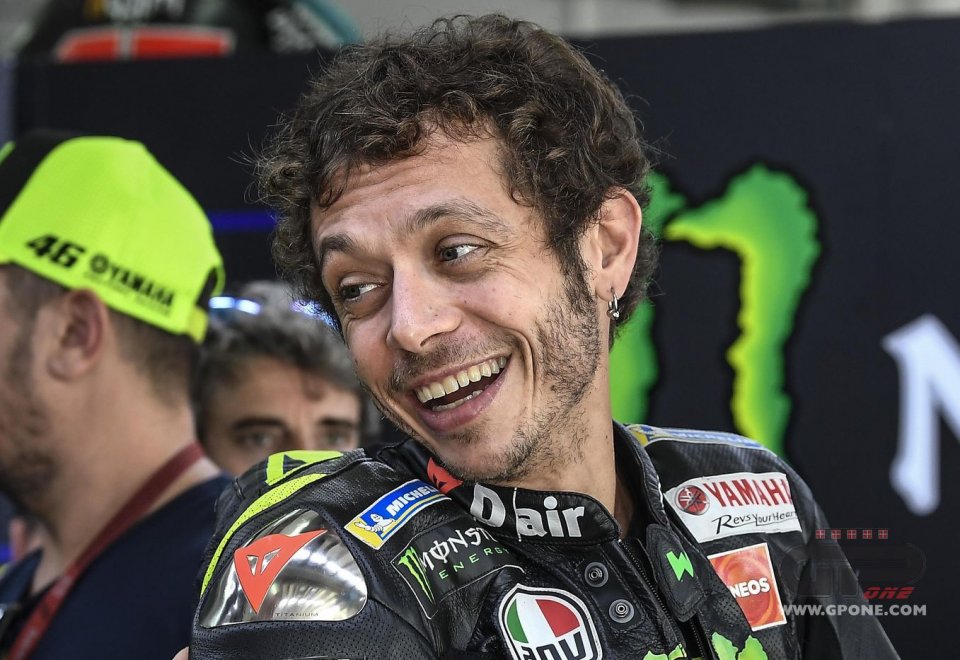 Regarding the 'departure' of Valentino Rossi from the official Yamaha team, everyone has their own opinion, but we take for granted one thing that, perhaps, should not really be taken for granted: the quiet acceptance of this decision by the 9-time world champion.

The fact that Valentino has had to put on a brave face mustn’t deceive. With the little knowledge that we have, the decision by Lin Jarvis - but of course the Yamaha board is right behind him - was one that can’t have gone down well with Rossi. It must have been a difficult one to suck up.

Added to that the fact that in the Iwata manufacturer’s press release they wasted thousands of words to state the obvious: Rossi can do what he wants. There will always be a Yamaha for him… something which is damned obvious, but it doesn't mean anything.

No details have emerged as to how they came up with this solution. What can be deduced is that Valentino had asked them to wait until after the first races, presumably up to the Mugello GP. The ideal place for any decision. If he were to retire or continue his adventure in MotoGP, just one word from Rossi would have been enough to obscure any other event in the media.

And that's maybe what Yamaha wanted to avoid at all costs. In other words, to avoid everyone only speaking about this from now until May 31st.

Pressure on the manufacturer, but also on the other riders, would probably be considered unacceptable.

So instead, in this way it’s game over. Valentino is out and the hot potato now passes to the Petronas team which, however, in the intentions of the Malaysian oilman and also of Yamaha, should have been - as it is today in fact - the 'green' team. The one dedicated to young riders.

It’s difficult to say how much Petronas likes this new role, even if Rossi's visibility is of course excellent for any deal.

Not to mention that fact that even in this case Rossi would probably not be staying there for very long. How long? One year, probably, because we find it difficult to imagine the man from Pesaro continuing in an increasingly competitive MotoGP at over 43 years of age.

Of course, everything depends on whether or not Vale has another below-par season this year. Because if this year he finishes ahead of Maverick Vinales, we want to see how Yamaha would deal with the situation.

What does ‘there will always be a Yamaha for Rossi' mean?

The point, then, is another and so far, it has not been talked about. What does 'there will always be a Yamaha for Rossi?’ mean? That he will receive updates and take part in development together with the factory team? We don't think so.

Satellite teams have always been followed less, and development is managed by the factory team.

Will Valentino Rossi, with his strong personality, ever accept all of this, even if it were for the sake of his brother Luca Marini, his possible teammate?

We have our doubts, to be honest. And the words of Stefania Palma, his mum Stefy, ring clear: "He did the right thing to take his time, I am proud of him", gives the impression that it was a decision already taken, but not accepted.

And so? Yamaha's phrase directed at the Phenom sounds something like: 'Valentino, as long as you want to race, there will always be a bike for you'. Not too different, in short, than the words Aprilia recently addressed to the almost 50-year-old Max Biaggi after the Sepang test.

Of course, Yamaha could not have done otherwise, unless they abdicated their decision-making capacity.

His last victory, if we want to call it that, dates back to 2015, the year he lost the title against Jorge Lorenzo. Or against Marquez? It’s still not very clear ...

We can think of many possible solutions to get out of this situation in which Valentino finds himself ... but none seems really viable to us.

Those who believe that Vale has no solution other than go and keep the seat warm in the Yamaha Petronas camp before bringing his brother Luca Marini in to take the place of Franco Morbidelli are wrong, however.

Isn’t he entitled to the dignity of being the one to communicate this move to one side?

There is something about this story that doesn’t convince us. And of course, the first thing is that Vale has totally accepted the situation without batting an eyelid…

Unless, of course, he has already decided to retire.