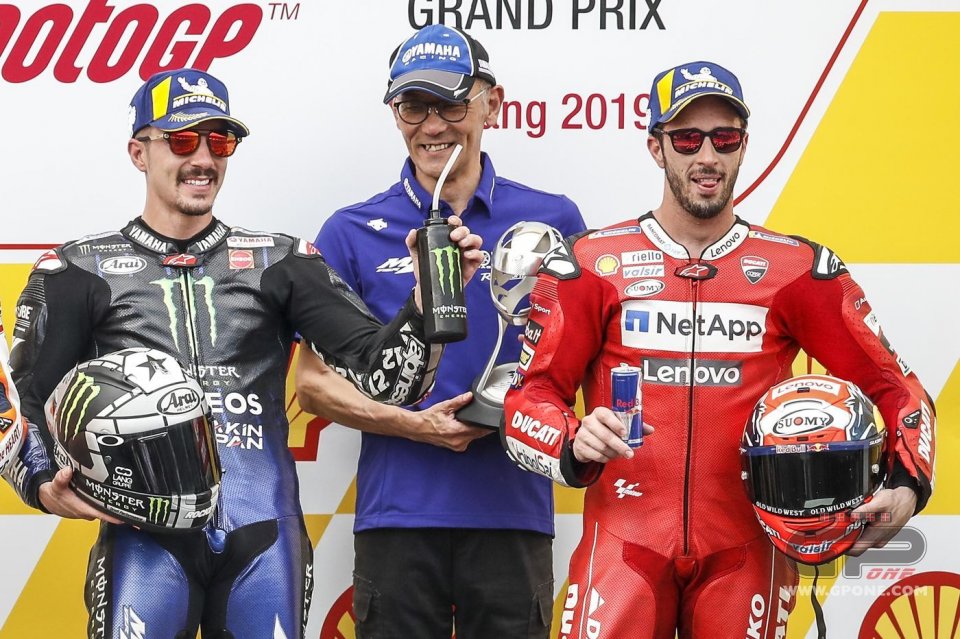 Maverick Vinales' victory in Malaysia really complicates the very anticipated riders market that Ducati is forced into more than the other teams.

If, in fact, Ducati was able to count on the Spanish rider being somewhat unsatisfied, not only money-wise, the fact that Yamaha raised its head so forcefully has made him think twice.

If we add the last two Grand Prixs to this, Maverick was the only rider to engage Marquez, beating him at Sepang with the tactic that has distinguished Jorge Lorenzo's titles: a high race pace, which doesn't give his rival the chance to get back in, that's why Lin Jarvis'  value is back on the rise. Also because the two young roosters in the chicken coop, Fabio Quartararo and Franco Morbidelli, raced below all expectations.

If it takes courage to achieve pole positions, you need experience to win races.

So the enthusiam Vinales had for Ducati's interest decreased. Let me explain: it doesn't affect anything, but if they were eager to close a deal at Borgo Panigale,  Yamaha's success at Sepang will inevitably lengthen the wait.

This is what Maverick Vinales meant during his post-race statement when he reiterated his intention to think more of the future right now. He took some time to reflect to examine what the Iwata team has to offer him.

In a certain sense, these are still big problems for Yamaha, which has ended up with two young men on its team who are doing really well: one rider who is still young and is back to his old self, then there's good old Valentino Rossi with his 4th place. He confirmed that, with a good bike in his hands, he's always ready to fight for the podium.

Maverick's success was a cold shower for the men in red

If Maverick's success was a cold shower for the men in red and, on one hand, he might have convinced them even more that he's the man to aim for in 2021, on the other hand, he has also strengthened his bond with Yamaha, so Andrea Dovizioso's third place has become a problem.

That's because, in the end, it's always only the rider from Forlì who brings home results on Sunday, even if he doesn't have that motivation that Gigi Dall'Igna would like to see in his top rider. But that's how Dovi is: a really supercharged diesel. He's fast and doesn't consume much, metaphorically, since his salary has grown quite a bit, but we can't expect races from him always on the advance, even though he had a good race against Valentino Rossi in Sepang.

Actually, he wouldn't have won the duel if he couldn't have counted on the speed and better acceleration of his Ducati, which kept Yamaha at bay.

That is: Valentino was there, but Andrea would not have been without the Desmosedici that, for three years has been the best bike in the world, no matter what anyone says.

Dovi wasn't satisfied with his duel with Rossi, he wanted to have it out with Marquez

The fact that Dovizioso battled with Rossi and his Yamaha for the entire Grand Prix, does not do him credit. In fact, Dovi himself did not appear satisfied. He even declared he expected to fight against Marquez, not against Vale.

And to stay with Ducati, this is what's on the plate: Andrea is a very reliable rider, and the desire to change him for a more aggressive young rider counteracts the fact that, without him, where would the Red team be?

Miller and Petrucci are not Ducati's future, they struggle to be the present

Miller is the usual stopper for...

a Prosecco that makes bubbles at the start, but then gets sucked into the group most of the time. Petrucci has become involute, and his performance is far from what is was at the beginning of the season. In Bologna, they're asking themselves where they're headed, with two riders on a track like the one in Sepang in an 8th and 9th position.

So we talked about the top, the best riders in the championship and, like Yamaha and Ducati, the riders market, which would have liked to be resolved much sooner but it, instead, just keeps getting much longer.

There will be other phone calls, exchanges of e-mails, phone calls, managers travelling, but we'd  be surprised if they soon led to any concrete results. Also because Valentino Rossi himself, after having almost reached the top of the podium with a 4th place, will take at least the first 3rd of the 2020 season before deciding on his future...