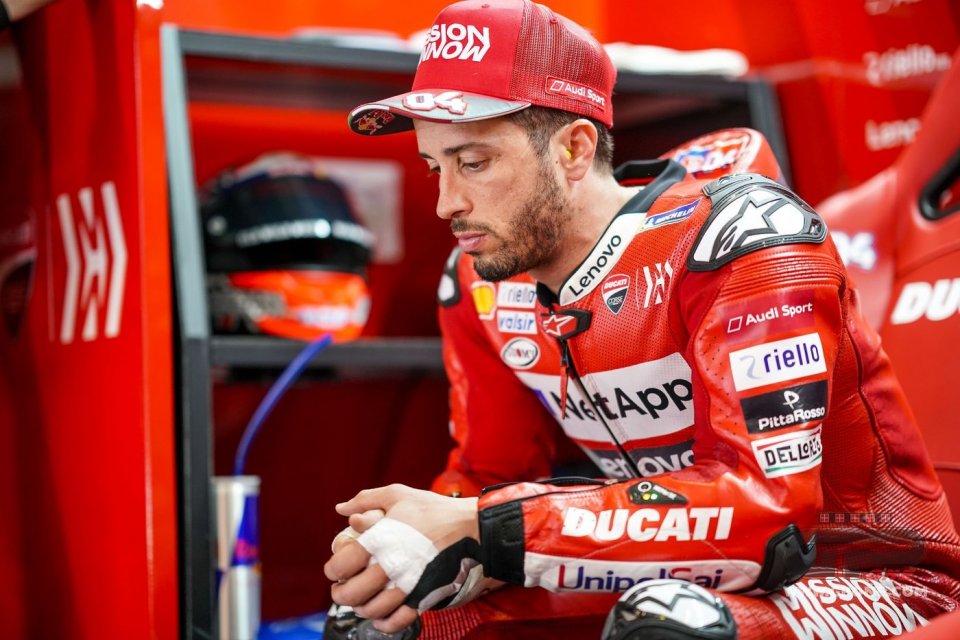 And it matters little that, even today, Dovi is second in the world and Vale is sixth, after he was overtaken at the Sachsenring by his teammate, Maverick Vinales.

The Phenomenon's crisis, however, is understandable: at 40, it's not easy to fight against guys who are half his age and the stigma of champions.

We must admit, however, that Valentino is facing this black year without feeling sorry for himself. It might also be true that when things don't go well, he puts on his "marketing face", but he hasn't made any excuses, so far. Perhaps he's leaving this task to others.

Andrea Dovizioso's case, however, is different. In fact, the rider from Forlì was unable to shake off riders in the last few races who, up until last year, he didn't even see.

We're not talking about Vinales, or a surprise like Quartararo, who amazed everyone.

We're talking about Petrucci and, above all, Miller. Today, the three Ducatisti dominated the entire race, and Dovi never seemed to have anything more on Petrux and Jack.

When questioned about the situation at the end of the race, instead of questioning himself like Valentino Rossi does, Andrea Dovizioso preferred to say that "the others have improved more" and added that the problem is that "the Ducati that doesn't ride well."

That might me, but this would have been acceptable if Andrea had finished fourth behind Crutchlow, a few seconds behind, and well in front of his teammates. Or have the limits of the winning Desmosedici suddenly become so obvious to lead to a drop in demand for all its riders?

The reality is that, if you want to do be a first rider, you shouldn't even be able to see your opponents, those with the same bike you have. On the contrary, from Mugello onward, the rider from Forlì has always fought on equal terms with Petrucci, who is a good rider. With all do respect, however, with the dues he paid, he probably will never be in the running for the world championship. At the Sachsenring, Petrucci said he did his best, and that he couldn't have done any better. Also because he rides like Dovizioso. Petrux is rightly proud of his results. We can say he has reached Dovi's level, but is Andrea at the best of his possibilities? We're not convinced. Or, if this is the case, he was overrated when Ducati was clearly superior to Honda.

Because, surely, the Ducati is not perfect but, from here to saying that it's worse than Yamaha and Suzuki, is a big jump. To confirm it is also the ranking: two victories and seven podiums, against Yamaha's one victory and five podiums and Suzuki's one victory and two podiums.

In short, Dovi did a great job in 2017, with a GP17 clearly superior to Marquez's RC213-V, putting Jorge Lorenzo in great difficulty. Then, the following year, with great delay, we have to admit, Porfuera started pushing ahead, and Dovi rightly engaged in great standoffs with him, never giving him an inch, with mixed results, including some falls. The competition between the two created several problems, but pushed both to the max.

During those days, there was a lot of talk about the difference in engagement, and the consequence is that, today, like back then, the first Ducati rider earned ten times than the second. But where is the difference in performance?

At the Sachsenring, Dovizioso accused the head honchos at Borgo Panigale of not having strategies and that some must be implemented, even if it would take another year.

So Andrea Dovizioso is ready, not only to give up this world championship, but also the next one. We're not the ones to say it. He did, after the Grand Prix.

He won't agree with this interpretation of the facts, and he'll get rid of this annoying pamphlet, saying that behind it hides Lorenzo's fans. But in this sport, (un)fortunately, the chronometer says it all.