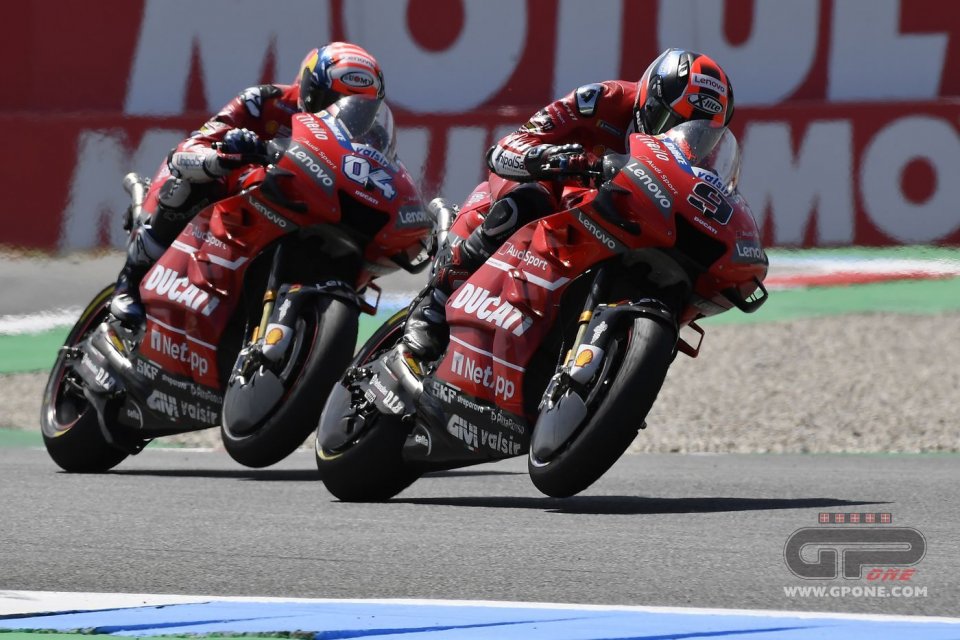 Ducati  understands  this by now. This year's world championship will again be won next year.

You can simply blame the GP19 that has "grown less in some areas as compared to its direct rivals, as Andrea Dovizioso clerically points out, and realizes that you cannot bite the hand that feeds you. Or you can blame it on others, like Petrucci who, almost with tears in his eyes, confessed to feeling insecure "between a rock and a hard place," to use his own words, while battling it out with his friend and rival, Dovizioso, without having the certainty of a place in the team next year.

Two attitudes that can both be criticized. The first because you can't be satisfied of having "done your best possible," like Dovi said, after having gotten 14 seconds; the second because, after his excuses for the victory at Mugello, in front of the foreman, Petrucci should have realized that this attitude does not pay off. That is, being submissive and the obedient second rider will probably improve his bank account a bit but at the price of an ulcer.

In short, the usual situation in Ducati memory that repeats itself among the duos in red. We know that the alternative is a difficult coexistence, like the one we experienced first with Andrea Iannone and later with Jorge Lorenzo.

Difficult coexistences that, however (but this is an absolutely personal opinion) - "as a journalist, because you don't know many things," like Dovi said - make the bike progress because they don't allow themselves to settle for less.

What is instead happening this year with Dovizioso, who is unable to break away from his wait-and-see strategy, while realizing that you can't beat Marquez by doing your best possible, that is, collecting points.

Which brings us back to our initial statement: this year they'll again be winning the world championship next year. While the question that Andrea should be asking himself is: why do we need another absolute second place?

It is not true that we long for Jorge Lorenzo - Dovi hasn't yet gotten over the comparison with Jorge - but it is true that the rider from Mallorca does not settle for less. He has never settled for less and prefers to have crappy seasons rather than bowing to the logic of "I did the best possible."

Now, the rider from Forlì has had two good seasons, especially the first one, against Marquez, even beating him sometimes in direct confrontations, but this happened when he had a technical advantage. On the other hand, Marc has always accepted the challenge, risking to the last meter, while he could have settled for second place.

One would say: but the result is the same. That's true, but you don't win world championships by being accountants. Or rather, it can happen, but your opponent must come upon some kind of problem.

And the only way to create one for him is breathing down his neck every meter of the way.

We confess, but you've probably already gotten the gist: we did not like Ducati here in Assen. Not because it ended up in fourth, but because the two Ducati riders identified each other's limits.

It's obviously true that there was a decrease in performance due to lack of grip, but neither of the two riders, for different reasons, tried to push further. Dovizioso because it's in his nature, Petrux because he's terrified a) of making a mistake while battling it our with his teammate, b) of not respecting the hierarchies, or finally c) of worrying, if he falls or worse, of not deserving a renewal.

Now anyone can argue what he wants to or would like do, like Davide Tardozzi who, in his role, came to explain to us in the press room that it's the logic of a company to take the time it needs to decide when to renew a contract.

All true. But this is not the Ducati we want.

Our popular “Frankie” confessed to being a victim of the degenerative disease, but he hasn’t given up: “The human body is like a motorcycle, if it...
2 hours 20 min ago

At Oulton Park the Australian took his second career victory. Nothing doing for Iddon, after leading the race for a long time. 5th championship...
7 hours 7 min ago

Jack: "I set my time thanks to Rossi and Bagnaia. Everyone will have tyre management in a corner of their brains". Fabio: "I'll try not to make a...
16 hours 53 min ago

Dominique Aegerter took his second win of the season overtaking the man from Rimini on the last lap, Ferrari finished in third place for having gone...
21 hours 52 min ago

“I tried to get more grip on the rear and didn’t succeed. It’s useless to waste time. I’ll focus on the front to brake like Ducati, Honda, and Suzuki...
1 day 7 hours ago

The McAMS Yamaha rider achieved the best time at the end of FP1, with a gap of more than eight tenths on his opponents. Fourth position for Ryde,...
1 day 15 hours ago