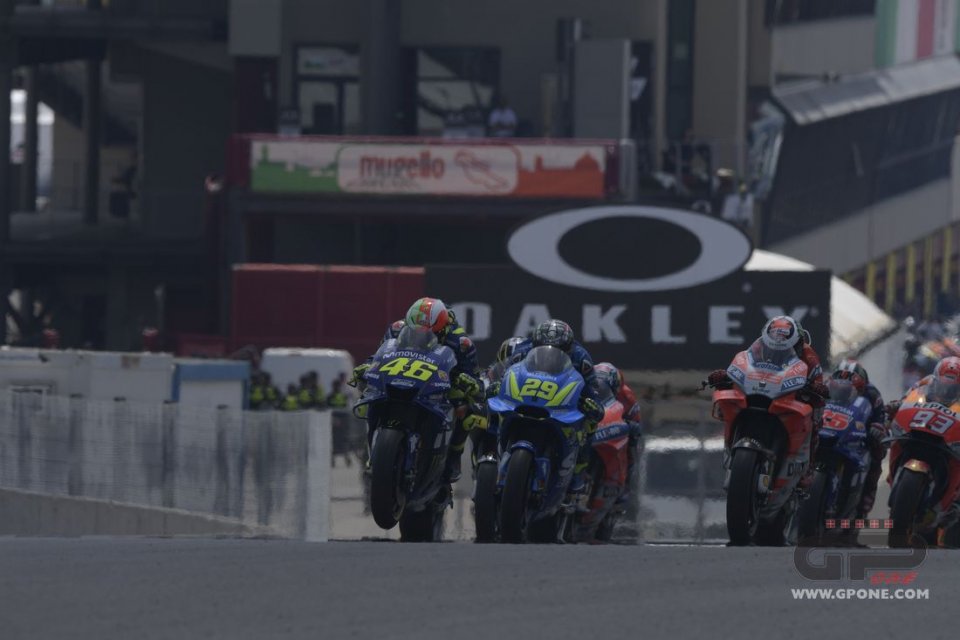 Among all the old championship circuits, Mugello is the one that has changed the least over the years. It hasn't changed at all in fact. Its original design, the work of engineer Gianfranco Agnoletto, has stood the test of time, since its creation in 1974.

We well remember the year because we were lucky enough to have the chance to ride the track with a Ducati 750 SS. The circuit director was Remo Cattini who, during the briefing, told us just one thing: don't run off track.
Remo wasn't worried about our physical well-being, but rather his circuit: "if you knock down the wood stakes or netting, you'll have to pay", he said.

His words were more worrying to a young twenty-something than a cement wall.

Back in the 70s, Mugello wasn't the safest. The run-off areas were risky and the netting served to stop you. That's if you were lucky enough to crash into them and not the stakes, hooded in green rubber tubing, presumably, now we look back, for aesthetic reasons.

And yet it was already a magnificent track, and the big Ducati, powered by its 87 hp, didn't even lose many of its 'more than 9000' revs when, at the end of the straight, it reached the hump before San Donato.
45 years have passed since then and, in that time, we've seen various tracks disappear for safety reasons: the old Nurburgring, obviously, Rijeka, in Yugoslavia, Nogarò and the Paul Ricard, in France, Estoril in Portugal, Suzuka in Japan, Jacarepaguà in Brazil, Kyalami in South Africa, Salzburg in Austria, Spa-Francorchamps in Belgium, and we could go on.

Others, like Assen, or Misano, jhave survived, but at what price?
The Dutch TT track now has very little in common with the 'cathedral' of old.
And Imola, Enzo Ferrari's 'little Nurburgring' has been disfigured by chicanes.

Each time we've 'lost' a track, it's been painful in the way it is when a great rider retires.
And we have indelible memories of each track: the old Acque Minerali, the Double Droit of Paul Ricard, the Eau Rouge at Francorchamps, the S before the finish line at Salzburg, where the violent changes in direction would see the 500 bikes lift their wheels.

Points that would make your heart pound. But the continual search for safety has done away with them, together with the tracks that hosted them.
Change or go, this appears to be the law. And it's only right, even if it's seen us lose some fantastic tracks.

So, in 1977 when Barry Sheene and Giacomo Agostini, still affected by the death of Gilberto Parlotti, got the axe to fall on the Isle of Man, we welcomed Silverstone with enthusiasm, but today, when we head there each year, finding it ruined as a result of modifications, we ask: is it right?

And yesterday, when Andrea Dovizioso and Marc Marquez both spoke out against the San Donato hump, claiming it is too dangerous with the current bikes, we thought: Mugello is the Casanova nosedive and the Arrabbiata double, but it's also that hump. Rounding it off, to remove a difficulty, would be a crime.

Then, a moment later, we considered the power, more than triple that of the 750 of yesteryear, but also that of Ago's MV Agusta, which barely reached 100 hp and also Doohan's 500 bikes, under 200.
And it is then that I realised that if that hump is the price we have to pay to see riders take on Mugello in coming years, at speeds of 356.5 Km/h, well, it's not too high a price to pay.

VIDEO - The flames spread during a day of free practice, no harm to people or structures
6 days 20 hours ago

The reigning champion wins race 1 but ends up on the ground in race 2, giving the Suzuki rider his first career success. A 4th and 7th place with a...
1 week 2 hours ago

A non-stop week for the Ducati rider, beginning with the Misano tests, then a bike ride to Tavullia, and today on the Dorno track
1 week 21 hours ago