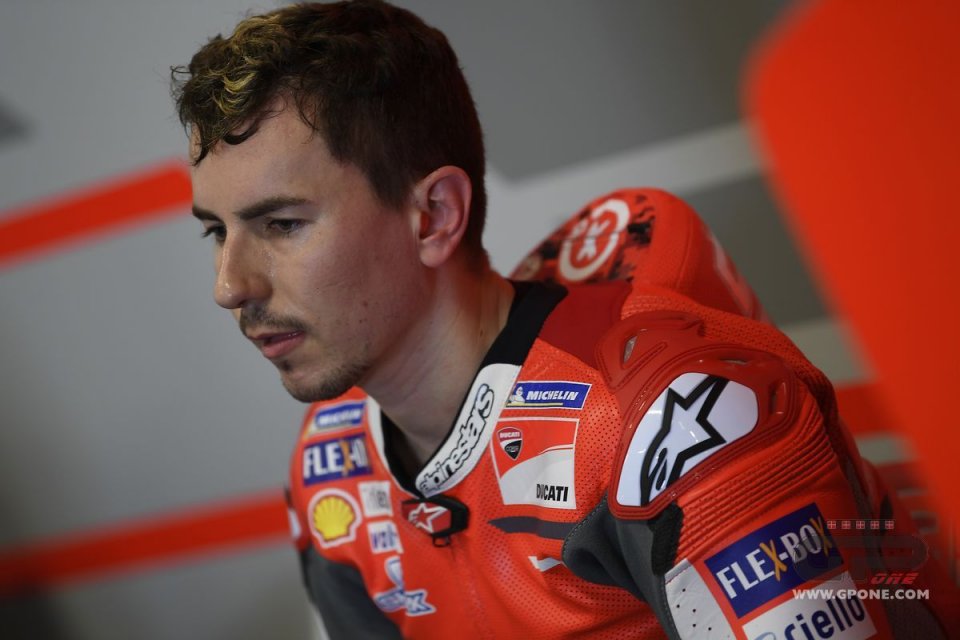 With the top riders already sorted, despite Dovizioso having waiting until Le Mans to sign, there is only one really interesting rider still available and that's Jorge Lorenzo.

There's no point beating around the bush or trying to diminish the five-time world champion. The Majorcan is a winner whose talent is not lessened by the fact he's unable to tame the Red bike.

Melandri found himself in a similar boat (with team-mate Stoner doing an even better job of crushing him than Dovizioso is doing) as did His Speedness Valentino Rossi, about whom we'll say no more.

The list of riders who have tried and failed is too long to cover here.

The Ducati is not an easy bike, and let's stop pretending it's any different to that of the Stoner era.
Casey won with it, while Valentino immediately realised that he'd never be getting nowhere fast.

We're talking about different years of curse, and different engineers developing it, Filippo Preziosi and Gigi Dall’Igna are perhaps at opposite end of the scale, but the construction philosophy is what counts.
And just as every Honda that comes out of the Toyko factory responds to specific characteristics, so does every Ducati. Otherwise, the riders would not all agree in saying that force is required to ride it.

But back to Jorge Lorenzo, the only 'giant' missing from the highest step of the podium in the last two seasons.
Where will he go if he leaves Borgo Panigale?

It was said that he was heading in the direction of Hamamatsu, but then Le Mans brought the Joan Mir option (confirmed by the sources themselves).
A relatively safe investment considering that after scoring the Moto3 title, it took him just five races to reach the Moto2 podium.

The problem, in his case, is a pre-contract with Honda, so if HRC chooses not to keep Andrea Iannone, the Italian's place would go to the young Spaniard.

Such a likely scenario that the Maniac is already looking at a possible move to Aprilia. As is Danilo Petrucci, in case Jack Miller is chosen over him and he is not promoted to the factory team alongside Dovizioso. At this point, the factory seats would be filled with only satellite team spots left (at least on paper).

But in reality this is not the case because there are two 'ghost' bikes, those of team Marc VDS, an unknown right now due to the dispute between team manager Michael Bartholemy and Belgian billionaire Marc van Der Straten.

Currently with Honda Mr. VDS was negotiating with Yamaha. A logical choice that would involve Franco Morbidelli.
What would happen if, coming out of the lethargy that seems to have enveloped him, Lin Jarvis saw an opportunity to bring dear Jorge back to Yamaha?

A third factory bike is something Honda and Ducati have already been doing for a while and would be a good choice. Considering Vinales' recent comments too, perhaps Ramon Forcada could come on board (as Ducati does with its technicians in Pramac), safe in the knowledge that he has a third rider capable of winning.

We are sure the operation would receive the approval of Carmelo Ezpeleta, who can't allow Marc Marquez to run away with his championship.
Sure, there are some sticking points - Marc van Der Straten prefers youngsters and Moto2 and would like to see Alex Marquez move up to the top class, but to be honest we don't see the two Spaniards as being on the same level.

Having said that, considering there won't be two more Suzukis - they've been promising this since Kevin Schwantz's day but it's never come to fruition - and that Aprilia won't supply any satellite teams, right now there are a lot more riders than bikes available.

Someone will be left out in the cold.
It would be scandalous if this were Jorge Lorenzo.