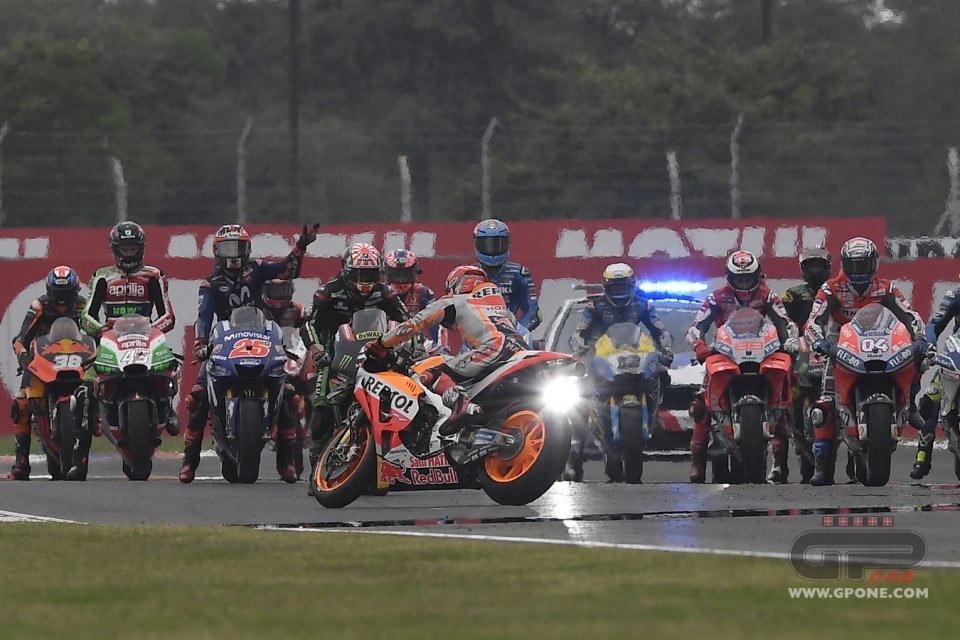 A world without rules is a world without control. That’s how it is in life and the same is true in the world of sport, which is the ‘gentle war’ that must teach us, from the first time we practice it, how to live.

Obviously, in an ideal world there would be no need for too many rules, related sanctions and people in charge of enforcing them.

We should live, as Immanuel Kant said, according to a ‘categorical imperative’; “Act only in accordance with that maxim through which you can at the same time will that it become a universal law.”

A Utopia, of course. We can agree with the German philosopher on the fact that ‘a moral action is one that would be right for any type of person in circumstances similar to those in which a rational agent is at the moment of performing it’.

But we are human. We need laws. And organisms which enforce them.

Far be it from me, twelve hours after the events of Rio Hondo, to enter in any way whatsoever into the controversy between Rossi and Marquez. The fact that it was a racing incident is self-evident in that it occurred during a Grand Prix. Whether or not it could have been avoided is another issue entirely.

Because whether or not a collision between two riders is punishable - we’re talking about racing, not cancer research - is all there: could it have been avoided or not? Fault and therefore punishability, stems entirely from this summation.

But as we said, we want to talk about other responsibilities. And other faults.

Above all, the responsibility of having let Marc Marquez line up on the grid anyway in a situation where the rule is crystal clear: Marquez should have been escorted off the grid. No ifs ands or buts.

Since he was allowed to start - the grave fault of Race Direction - the Ride through penalty itself makes no sense. First you let him do it and then you sanction him. Illogical.

The start should have been aborted and Marquez pushed off the grid. That is, if the personnel in charge are not kneeling before Marquez or even Rossi. If it had happened to Tito Rabat, how would things have gone?

Provided, in any case, that we close an eye to Race Direction’s initial error, the penalty should have been a time in seconds.
Thirty seconds? In the principle of not creating risks, Marc would have ridden his solitary race and then find himself at +30”.

It is clear, on the other hand, that the Ride Through, along with the loss of positions after his risky pass on Espargaró, had the sole effect of placing even more pressure on the Spaniard. We are not justifying him: we are simply acknowledging the reality of the situation. We are talking about a rider with ‘race mode on’.

And then, the cherry on top was the further penalty of 30” after the collision with Rossi. Because if Race Direction immediately deemed that it was NOT a race incident, what does that extra 30” penalty represent?

The race should have been black flagged. If not here, then when?
What do you need to do to deserve it?

This topic, alas, takes us back to Sepang 2015. Notwithstanding who may have started what, Valentino Rossi’s clear intention (albeit after provocation) to slow down a rival, almost stopping him, causing, albeit involuntarily, a crash, should have earned a black flag.

These are the rules. And then a judgment of the intensity and wilfulness of the provocation by Marquez, who should have been the subject of another investigation and, if applicable, punishment.

Rules. Knowing them. Enforcing them.

Sometimes what seems disastrous for - alas - the show, would be resolved in a less damaging way with farsighted wisdom. Something that it seems we do not see in the current MotoGP Race Direction.

It is therefore fair that Magic Marquez be given a warning: something that would amount to telling him: you are not alone on the track. Race more responsibly. World Championship Grand Prix Motorcycle racing is a ‘gentle war’.

In the same way, although in consideration of all the extenuating circumstance of the case, we need to bring back the legality in the paddock in terms of the actions of the teams and/or the other riders. You don’t go to management asking them to take ‘measures’. You stand up and make motivated claims, requesting sanctions based on the regulation articles. Got it, Yamaha? We know that among the Japanese ‘dog does not eat dog’, but can we stop with the ‘underground yet visible’ attitude? With this ‘I want to punish the rider, but not the rival manufacturer-friend’? Heaven forbid that at the next official gathering you won’t be able to drink Saké together.

Of course, Dorna has a responsibility too. There are many weak points in its structure. IrTa should not be paid by the organisers, but by FIM. The only body that is truly ‘third party’. It is a bit too immanent in the protection of its interests. But this is inherent in its structure: it is a business. Its mantra is profits. But these are aspects that can be examined more calmly and then, we would like to say: In World Championship Grand Prix Motorcycle racing there are probably those who are more realistic than the king. Even Carmelo Ezpeleta does not want this kowtowing to the powers that be at the time, whether a rider or a manufacturer.

We have said for a long time that this Race Management is not up to its task. It should be replaced and re-founded.

Because the damage it does goes well beyond points lost by Rossi or any super disqualification of Marquez. It damages the sport.

Sprint Race in all GPs starting in 2023: "We’ll improve the show"

Gagne: Hat’s off to Petersen and Petrucci who put on a show"