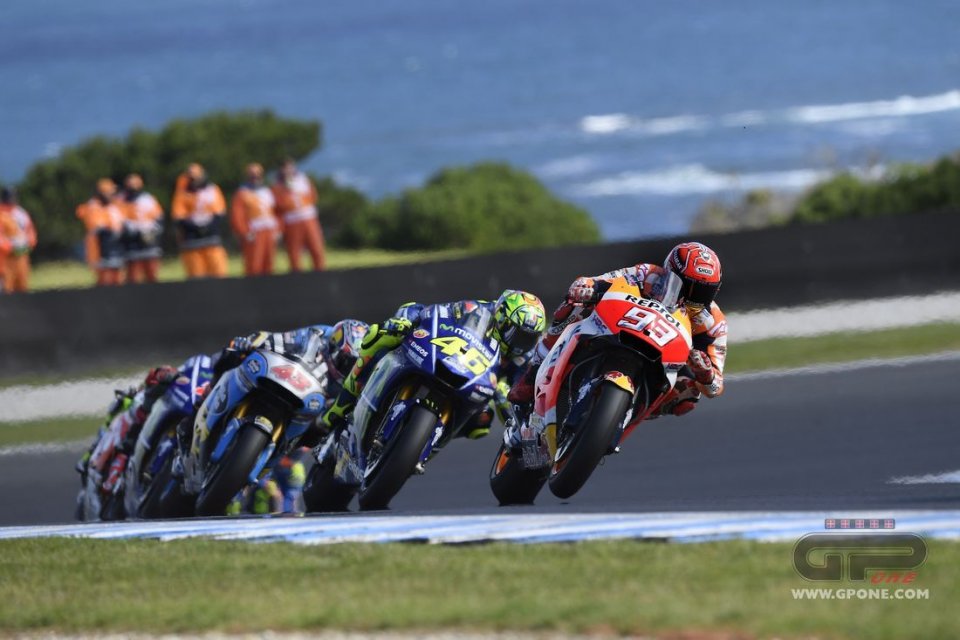 Rossi and Dovizioso lied to us. The Yamaha is not as desperately behind as Vale often led us to believe, neither is this year's Ducati as competitive as Andrea has often told us.

Both Jorge Lorenzo and Marc Marquez were more honest in fact.

The first has always explained that he doesn't feel really comfortable on the Desmosedici, although he has also admitted that it must be he who adapts to it, while Magic Marc, any time the subject has arisen, has talked about growth, as well as his unique riding style that allows him to ride around the problems.

A phrase that we often heard in the past from Wayne Rainey, three-time world champion with Yamaha from 1990 to 1992.

Let's take a closer look though...

Yamaha surprised us at Phillip Island particularly because Rossi struggled in pre-qualifying but in reality, if the M1 fnished in second, third and fourth place with Rossi, Vinales and Zarco, it can't be half bad. On the contrary...

The reality is that the Iwata in-line 4 cylinder engine is always more at ease through long corners, where it exploits corner speed. It's true that it has lost a little of its agility but at suitable tracks, it's definitely competitive without any need to revolutionise it, as the nine-time champion was asking. It's always been the case that at a certain point of the season, Valentino puts a little pepper on his engineers' seats to ensure he has the best possible bike for the new season. A tactica that, until now, has always worked.

The Ducati, on the other hand, is not at ease at all tracks, far from it. Dovizioso is definitely doing great things this year but the disappointing performance by all the Ducatis at Phillip Island tells a simple story: when it has to deal with tracks with long and fast turns, forcing riders to lean most of the way through the turn, it suffers from serious understeer. This is one of the GP17's unresolved issues... it doesn't hold the line and runs wide. The easiest way to keep it in line is to force it to stay down, using the outside shoulder of the tyre.

"But aside from the fact that once you're at 60 degrees or a little more you cannot go, this is also the best way to cook the tyres and find yourself with no grip from mid-race on", explains Lorenzo, who was a master of this technique with the Yamaha.

As if this wasn't enough, at tracks like Phillip Island the red bike's furious acceleration is of little use, considering the track's winding yet also smooth layout, and neither is braking stability. The two tracks at which the Ducati has actually dominated were the Red Bull Ring and Motegi. Notorious 'stop-and-go' tracks, brake and acclerate.

Does this make sense?

The Yamaha and the Ducati are practically opposites, in terms of strengths. And this also explains why Jorge Lorenzo is having such a terrible season. Running in line with the rest of the Desmosedici pack at tracks where the red bike doesn't work so well. He's not yet able to exploit the bike's strengths but at tracks where it doesn't really have any, he goes more or less like Dovizioso, who knows it and has ridden it for years.

And Marquez? And the Honda?

The world champion is simply the master when it comes to riding the unstable, critical, difficult RC213-V. Speak to Cal Crutchlow for confirmation.

To make the Japanese four-cylinder perform, it needs to be ridden wildly. It needs to be assaulted to get the tyres up to temperature, something that the lightweight Dani Pedrosa with his clean riding style is unable to do. Only thanks to his magical style does the almost six-time champion seem to have the edge on his competition. Before the race, after the sighting lap, Marc for example had the medium rear tyre taken off, opting instead for the soft used by Vale and company.

"I want the fight to only be about our riding", he said, justifying his choice. And the race he ran - notwithstanding the conspiracy theorists - was the exact replica of the 2015 edition.