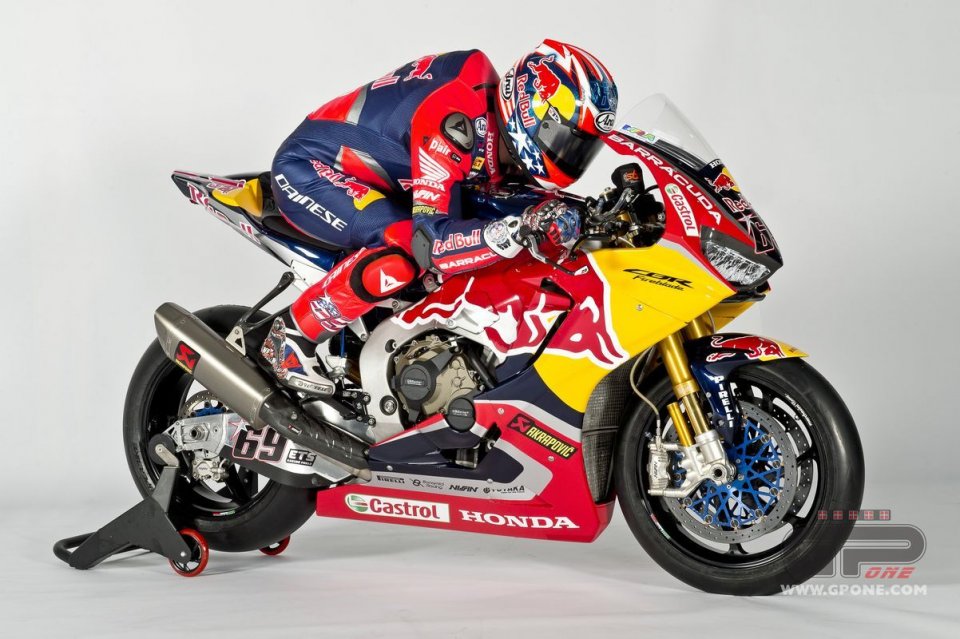 The Red Bull colour scheme will certainly not be enough to transform Honda from an outsider into a winning Superbike team, but the first impression from Hangar7 in Salzburg, the toy room for Dietrich Mateschitz, Mr. Red Bull, is excellent.

It is not so much the fact of finding the CBR 1000 RR alongside the F1 Red Bull cars or the KTM style livery that make the difference, but rather the reality of the situation that the sponsor in question likes. He likes the show, he likes winning and in the recent past he has organised fantastic events, like the jump from the Stratos spaceship with Felix Baumgartner from 36,600 metres.
A sport-show undertaking that had millions glued to their televisions watching live.

He, Mateschitz, was the man who fell to the Earth and who landing, revolutionised the world of sport.
The net worth of the wealthiest Austrian citizen, after all, is rumoured to be somewhere between $6 and 13 billion. An empire built around the best-known energy drink on the planet.

The Austrian entrepreneur, born in 1944 in Sankt Marein im Mürztal, in Styria has also invested in other sectors: he owns an island in Fiji and a weekly newspaper published in Austria, Seitenblicke. Legend has it that Mateschitz, an unrepentant bachelor and reserved viveur, purchased it so that he would never have to appear on its pages.

Until now, Mr. Red Bull has been right, imposing his view of sports in practically every sector he has entered. For the most recent, Superbike, we will have to see. One thing for certain is that the team presented today is very good: Nicky Hayden and Stefan Bradl are not only fast riders, but also very similar in terms of character.
Both of the fine lads said something very important during the presentation.

“The SBK rules are such that you need to work quickly during practice because there is not much time. Race 1 is already on Saturday and we only have one bike available to use. And then, of course, during the race it’s every man for himself and your teammate is your first rival, but declaring war from practice in this category would be stupid.”

Nicky, relaxed and smiling as always, then revealed a few more small details that already indicate an understanding: “Stefan is a rider who, like me, uses the rear brake a lot. We have a similar riding style and that will help the team a lot with their work.”

Naturally, neither of the two overlooked the difficulties that they will be facing.

“We are behind schedule - Bradl admitted - and I do not think that in the first two races, Australia and Thailand, we will be at the same level as the others, but we count on recovering over time. Anyone who thinks that Superbike is easy is wrong. The level of the top riders is very high. Rea, Davies, Melandri and Sykes are excellent riders and the technical level is also high with Kawasaki, Ducati and Aprilia, very, very competitive and well-prepared.”

Today, the only missing ingredient for transforming the Honda-Red Bull team into the umpteenth winning wager for Mateschitz is…that the boss of the grey-blue-red cans falls in love with the factory derivative world championship.

At that point, for the man who had the Deepflight Super Falcon built, a submarine with retractable wings that cost him $1.7 million, nothing is impossible, not even winning the World Superbike championship. Perhaps not this year, but if he likes the environment and the show, we believe that he will also be able to find the Honda CBR1000 RR’s only missing ingredient: the HRC brand on its fairings.

In fact, busy on several fronts, from MotoGP to the Dakar rally, the Honda Racing Corporation is missing. And that is an (unpleasant) surprise.