Grand Prix Motorcycle Racing resumes, (Hallelujah!), although the timing is not the best, given the fact that we are right in the thick of the Olympics.
Forget about Superbike that decided to commit suicide in the media, closing up shop on 10 July after Laguna Seca to reappear on the radar (so to speak) only on 18 September in Germany after no less than 68 days of 'holiday'.

Presumably, the first articles on the factory derivative championship will have to be summaries, like the ones we did at the beginning of the school year, to remind the viewers and readers of what was happening before the blackout.
But this year the Superbike championship is a joke-championship. And if the organizers think that in 2017 it will be something completely different because of the addition of Melandri and Bradl, they are lying and they know it.
The problem of their presence on TV and in the periodicals there is serious, very serious, and it should be handled in agreement with the manufacturers and FIM should hold the championship organizers accountable for it, but they won’t.

Let’s talk, instead, about the MotoGP restart on Sunday in Austria.

We saw the last GP race on 17 July at the Sachsenring, in Germany. From that time, the three classes went on holiday for three weeks to reappear - and this is pure genius - with the Olympics underway. And as if that were not enough, with two pairs of races one after the other, since on 21 August, a random little date that coincides with the end of the Olympic Games, the Czech Republic Grand Prix will be held.
Reasonably, how much space will be available on these two weekends?
We can tell you how much: very little.

Very intelligently, the F1 championship will reappear, on the other hand, on 28 August at Spa.
This is not a random selection and it shows great attention to the selection of spaces.

And let’s not forget that the automotive premier Formula championship has to arrange no less than 21 races on the calendar, not just 18!
We know, they tell us the same thing every time we criticize something: setting up the calendars is a difficult operation. And they add: even more difficult when it has to do with motorcycles since you have try not to clash with the F1 calendar, having to manage two different championships.

Even taking into consideration that they could not even manage to avoid sticking two Grand Prix races smack dab in the middle of the Rio Olympics.
At this point we ask: are we the only ones dissatisfied with the scheduling of our two championships?
Criticism, comments or proposals are welcome. 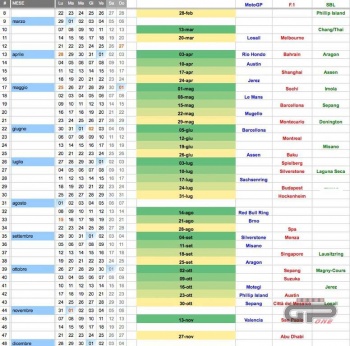