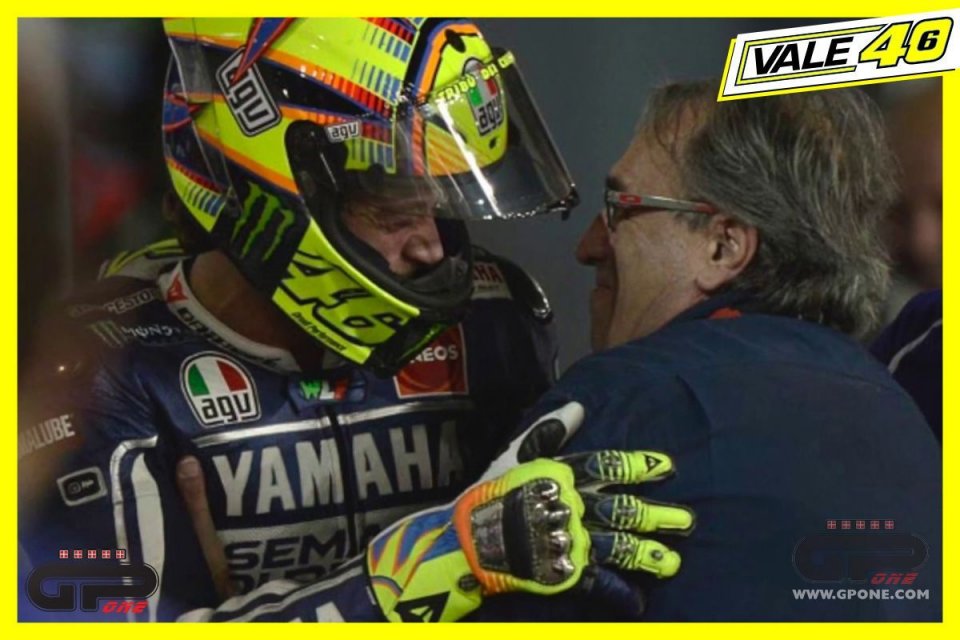 I was the first to write up a professional contract for Valentino. A sealed envelop, three-year contract. After he signed, Ivano Beggio asked me if I had lost it. He had no idea who Rossi was, and a three-year contract seemed exaggerated. In the end, I convinced him, and he trusted me. At that moment, no one, including myself, would have ever imagined where he would arrive, but there was no doubt that he was talented.

When I saw him ride, he immediately reminded me of Schwantz. He rode a motorcycle as if it were a bicycle, with absurd trajectories, throwing it here and there along the track. He was just like Kevin, and it’s no wonder that they’re still very close friends.

Valentino has not changed. He was and still is audacious. People automatically love him. You feel immediately at ease with him. He had an angel’s face, long blond hair, but he was instead a very determined kid and especially curious as a monkey. He wanted to learn everything about everything, and this demonstrated his intelligence.

I remember that, in the beginning, he was afraid of racing on water. When it rained, he didn’t want to leave his camper. But then he learned to also ride when it was wet. People liked him from the start, both because of his character and because of his way of riding.  He owes a lot to his father, Graziano, who, in the early years of his career, pushed him a lot, and, at the same time, protected him.

I met him when he was 15. Now he’s 40, and he doesn’t seem to have changed at all to me. I see the same spontaneity and sincerity, but with a maturity that makes him - and I’m saying this fondly - a charming son of a gun.  And he has always remained the same. Valentino’s greatest strength is to have fun in everything he does. Motorcycles are his Disneyland. He is extremely frightened of not riding anymore and created the Riders Academy, in order to continue. This makes us understand how much he’s attached to this world. Valentino can’t live without engines.

Honestly, I don’t know if he’ll stop riding in two years. If he’s still competitive, I believe he’ll continue. I think he’s the only one in the world that rides a motorcycle every day and competes against kids that are much younger than he. I always say that he has a fake ID card. It’s as if he were 25 years old.

As long as he still has a smidgen of energy, he’ll continue riding. Then he’ll do something with cars afterwards. Surely, he’ll continue to have fun. He'll never be a manager, maybe a spokesperson, for Dorna or for Yamaha. In the end, Valentino will remain on the tracks, but he’ll work behind the scenes.

I have many memories of Valentino, and they all have a common point: they’re about a guy with a great desire to live, to have fun, to be with friends. Valentino is, above all, loyal, and if you’re not the same with him, you’ll lose his friendship.