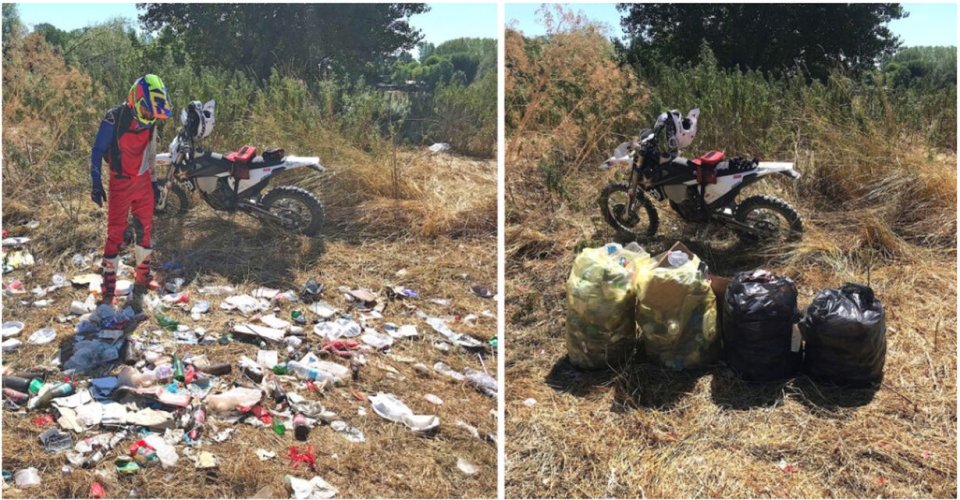 Often, Endurists don’t have a great reputation, since they’re seen as riders who pollute the mountain air, and destroy roads and meadows. But are these riders really that uncivilized? This morning, we received news (and the cover photo) from the local newspaper, oglioponews.it, that destroys the myth of the “ugly, dirty, and bad” rider, making it clear that Endurists are more than civilized (when they want to be). It happened a few days ago in one of the many floodplains of the Po river, where those who do Enduro are frowned upon.

Unfortunately, on the banks of the river, as well as on the bed when it dries, all the garbage that the uncivilized dump in the river washes up. But who cleans this mess? Several Endurists do, as they told oglioponews.it: “Even if we don’t tell anyone about it. But we’d love to know if those who write letters to newspapers do the same with nature. I also wrote to Bongiovanni (ed. the Mayor), because he should  know what’s going on,” the Endurist commented angrily and continued: “What bothers us is that it seems as if we’re doing something really wrong, ruining nature, while we, instead,  always try to make sure that we have the least possible impact on our surroundings.  Can hunters say the same? As we ride, we know where we can train and where we can’t. If anyone wants, we’ll take them to see where the animals are, and where they still are. Do those who hunt respect the environment? Do they collect their cartridges? Where we pass, we don’t touch anything. At the most, we leave signs on the ground. And where we train most of the time, there’s sand. We would gladly take people to see the animals of the floodplain as we see them, and we respect them. How many can say the same, even those who write letters to the newspapers? I have nothing against hunters. We’re just passing through. We don’t shoot anything. We don’t kill anything. We see boars, hares, squirrels, foxes, falcons. We know where they are and where the animals nest, where they’re born, where we’ve seen them, and we see them again the next time. We’re lucky to live in an area where there’s really room for everyone, with respect for everything and everyone.”

He concluded: “What I’d like to make clear is that often, without telling anyone, we do what needs to be done and help clean up where others abandon waste. We can send many more photos that testify that where we’ve passed through so many times, we stopped, and we collected what we found. We do it without telling anyone, because we don’t care about advertising it. What we do is because we really care about doing it and the environment in which we live. Can those who complain and who write, who comment on social media networks, really say the same?” We were impressed by this statement, we were pleased to read it, and we’re sure that there are many more Endurists who do the same.