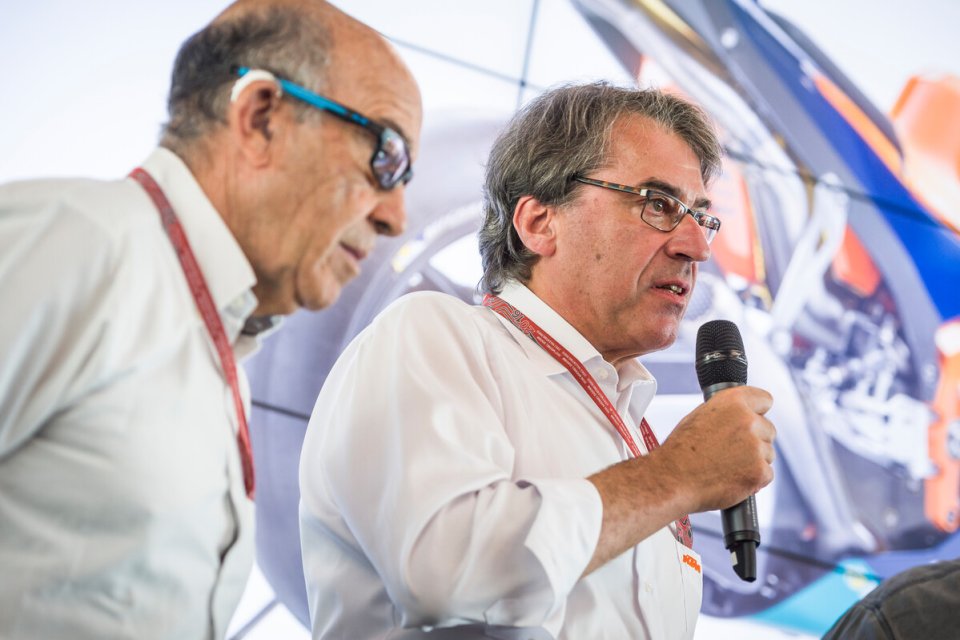 2023 will be the longest year for the MotoGP. Twenty one Grand Prixs on the calendar that, with the introduction of the Sprint Race, will result in 42 races. Too many for some, but no one had really complained, at least not until now. Stefan Pierer, the head of the group that includes KTM, GasGas, and Husqvarna, was interviewed by Speedweek and explained what he thinks: “I clarified things with Carmelo Ezpeleta at the Valencia GP. As a constructor, we want to have a maximum of eighteen Grand Prixs,” he said.

The  company shares this position, and Hubert Trunkenpolz, CEO of Pierer Mobility, stressed: “We don’t need three GPs in Spain, and I think that the four in Asia are also exaggerated. There should only be one event per country, and this also applies to Italy, which has two. We’d rather have three GPs in South America, because the races would be broadcast in Europe during the first night.” Then a jab at Kazakhstan: “It’s absolute nonsense for us. India is the largest motorcycle market, so they should at least consider it.”

The fact that such an important constructor complains about the calendar can’t make Dorna happy, so Carmelo Ezpeleta responded to the criticism.

The first concerns Kazakhstan. “No other organizer agreed on a date in July. if I had done without the Sokol Circuit, there would’ve been a summer break of five weeks, and we can’t afford that.”

There seems to be no talk of reducing the number of GPs. “Personally, I could live with fifteen races, but we have to expand because interest in the MotoGP has grown considerably. Saudi Arabia also wants a race.”

Last point: a calendar with May that's almost entirely without a GP, and a compressed season finale with only two free Sundays.

“The organizers don’t want to clash with the F1, which has three races in a row in May,”  Ezpeleta explained. “They have twenty-four  GPs, and the spots available for us are increasingly reduced.”

On one of the two races in Italy, the head of Dorna doesn’t seem to agree: “We have to be respectful towards all the Italian teams and rider. Ducati and Aprilia will provide twelve bikes in the MotoGP next year.”

Cecchinelli says that Dorna also intends to bring in a ban on rear ride-height...

Changing of the guard at Dorna: Arroyo will no longer be Chief Commercial...