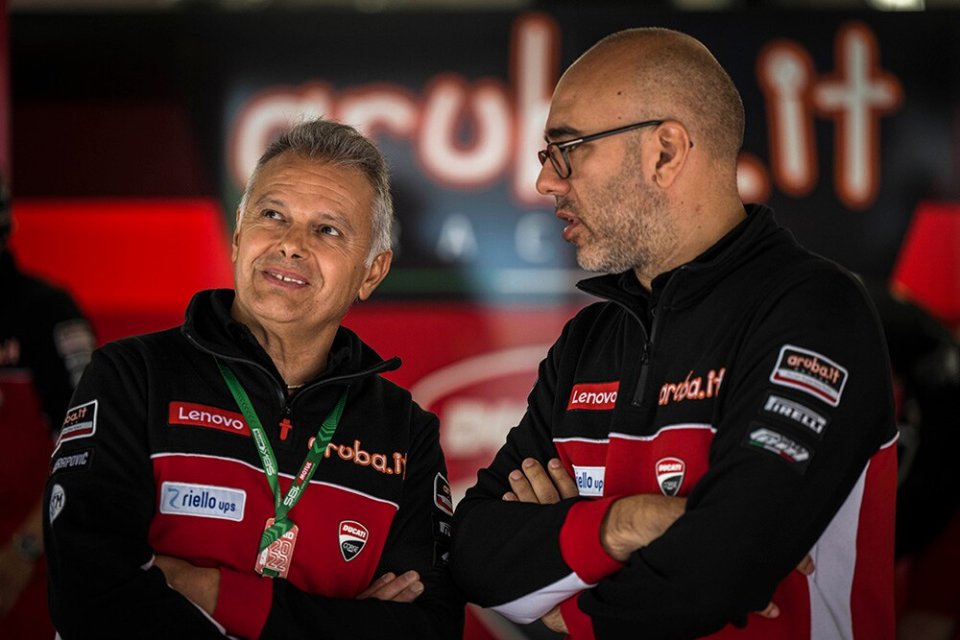 Ducati hadn’t won the SBK in 11 years, but their rivals didn’t take kindly to seeing a Rossa in front of everyone. Throughout the year, managers and riders complained about the performance of the Panigale V4R, often leading back to Bautista’s featherweight. So, for 2024, they’ve decided to calculate the minimum weight as the sum of motorcycle plus rider, but  now they already want to introduce this rule for next year.

Serafino Foti, Aruba’s Team Manager, tried to be as diplomatic as possible, but being told that Ducati won due to a few less kilos annoys them.

“We have to always acknowledge the merits of those who win,”  he emphasized. “We tip our hats to Rea when he does it. We have to respect him. In those years, we didn’t complain, pointing a finger at him, but we worked to improve ourselves and, this year, with the arrival of Alvaro, we reached the limit, because his riding style adapts perfectly to our bike.”

Does this criticism bother you?
“No one criticizes, but those who win must be rewarded, and they must be acknowledged and, this year, it was our turn. It’s a bit annoying to read certain statements. We won because we did a great job, and we have a super rider.”

But there are those who would like to make Bautista’s Ducati heavier, as early as next year.
“The regulation has already been established and says that the minimum weight of both rider and motorcycle in 2024 will be introduced. After this decision, they considered whether to anticipate this rule for  2023. We’ll see what happens. If they have to reach a compromise, it can’r be one way.”

Has Ducati had enough, and are they thinking about leaving the SBK?
“I don’t think a tug of war is ever good and, I repeat, the regulation is currently for 2024. It’s not Alvaro’s weight that made him win, because there are advantages and disadvantages. When it’s very cold, for example, the temperatures of his tires are lower than those of others, and it’s a risk during the first laps of the race. When it rains, the same thing happens. On a track like Portimao, with sudden changes in direction, it’s more difficult. There are pros and cons, and this is the first time that this problem has arisen. Dani Pedrosa is a small rider, but his weight has never given him advantages.”

Is there a solution that might work for you?
“The SBK has a minimum weight that’s already high. We’re talking about 168 kilos. The highest of all motorcycle competitions. Adding more kilos would make safety worse in the event of a fall. They say that, in the Moto3 and other categories, the rule of bike weight plus rider works, but we’re talking about much lighter bikes.”

We’re already in December, and we still don’t know what’s going to happen ...
“To reach a calculation that works takes time. You have to study, do tests to optimize everything. Also, Alvaro will still be racing with us next year, but if he goes to race for another brand in 2024, what will the same people who are establishing this policy do? My idea is this. The weight of the bikes is already high, so we proposed to lighten the others and not weight down ours. This could be a compromise that could work. The result would be the same.”

Toprak was amazed that you continue to evolve with the Panigale.
“He who hesitates is lost! Ducati is always ahead. They made an incredible motorcycle series. In the SBK, we use that frame, and even the engine hasn’t changed much. Other manufacturers could also use this philosophy. It’s not Ducati’s fault if they made a hig-performing bike. We talk about price cap but, throughout the history of Ducati in the SBK, from the 851 onwards, their motorcycles have always been more expensive than the Japanese, because that is their philosophy.”