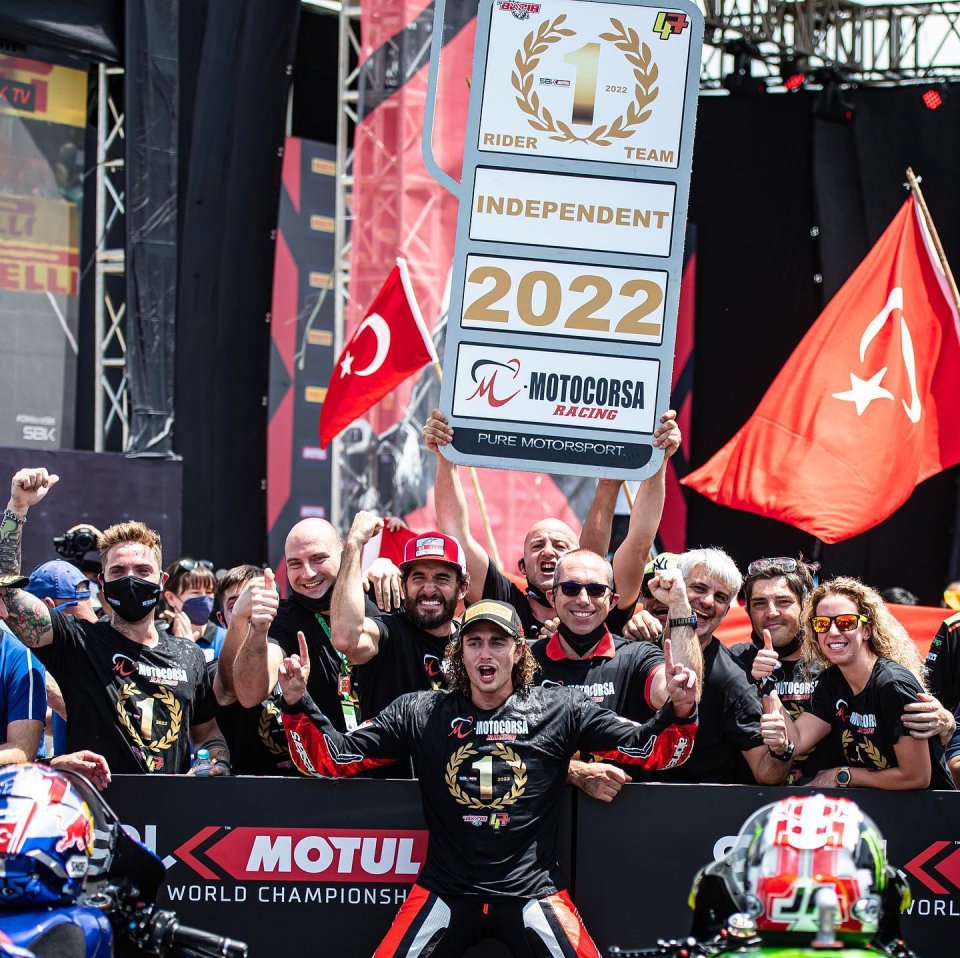 2022 was a year to remember for Axel Bassani and Motocorsa. In addition to improving on the performance of the previous season, the team led by Lorenzo Mauri even won the independent title, capturing the spotlight among the private teams.

As if that weren't enough, the contract extension for another year arrived with Axel, who was among the most sought-after riders in the paddock, given the interest from GRT and Barni. We talked about this and much more in this long interview with the owner of the Italian team.

“This 2022 has been a special year for all of us – began Mauri – we emerged in the long run, improving on the performances of 2021 and ended up by winning the independent title. We didn’t win a race however, we're still missing the top step of the podium, but we'll certainly try in 2023. However, it won't be simple at all, given that next year will be the most complicated of all for us, because the level of SBK will increase in a big way.”

Lorenzo, as you mentioned 2023, which Ducati will Axel have?

“He won't have a factory bike like Bautista or Rinaldi. We will have the 2023 Panigale V4, but it won't be like Barni's, who I want to congratulate for their investment and above all for bringing Petrucci to the World Championship. As I said, we will have the new Panigale and we will develop it in our garage. It will be a sort of homemade Panigale, let's say. We will go to the wind tunnel in Geneva and then at Portimao we will carry out the first track test. This is what we decided, to have more days before the championship arrives in Europe".

"Exactly! We will have a lot of things to focus on such as the clutch and exhaust with the aim of having a competitive bike that can aim for the top positions".

“To beat Bautista and achieve success, what is Axel missing?

“I’ll have to take the fuel tank off for him to race (he jokes). Axel has improved a lot in recent years, sharing a method that has allowed us to reap the fruits of our work. To get up there to the top, it's up to all of us to take a further step both in terms of work and development. Axel was very fast with the Ducati and at the same time the Panigale V4 proved to be an extraordinary bike, given that in recent years we have only bemoaned one problem which confirms the reliability of the Rossa. His strong point is carrying corner speed, while he has to try to manage tyre wear better ”.

This year, at Magny-Cours, you ran the risk of losing him.

"True! There was the possibility that he would say goodbye and I would have been very sorry, but then again this is the world of racing. In the end, however, we managed to reach an understanding with him and his manager, Alberto Vergani, to continue together ”.

If he had gone to Barni who would have been the substitute?

“I would have focussed on Bernardi. The challenge with Luca intrigued me a lot and I also add the name of Delbianco. Those were the two alternatives."

Do you think 2023 might be Bassani's last year with you?

“Of course and I mean it sincerely. Our goal is to make Axel an attractive rider for all teams. Should he go to a factory team it would be his victory and ours. Sometimes it happens that we joke about the victory, since today I’m still short of a win, in fact I would like to enjoy some Prosecco with him on the top step of the podium (smiles)".

In your opinion, what are the qualities that make Axel stand out?

“I'm a pain in the ass, because I adopt my own working method and it often happens that I make choices that I can't share in the garage. In recent years, however, Axel has become a man and his greatest quality is the fact that he has patience and knows how to wait. Sometimes it happens that on Friday he wants to put the tyre on to set the time, like many other riders do, while I tell him no, maybe wait for the next day. This is one example. In addition to this, you can see it: he is a rider who makes himself loved by the public, he is true and genuine ”.

What sort of world championship do you expect 2023 will be?

“It will be the most difficult world championship ever, just look at the riders of the other teams. Gerloff goes to BMW and two riders of the calibre of Petrucci and Gardner arrive. The bar has risen considerably, but our goal will be to see Bassani as the best satellite rider, aware of the fact that it will be tough".

Will the team be confirmed or will there be changes?

“We only have to make some assessments about the mechanics, but then the team is confirmed. Simone Corsini will be with us, as well as Matteo Buzzi, my engineer since 2012 and obviously Lisa Tosetti”.

Lorenzo, in recent weeks there has been a lot of discussion of the fact of a possible ballast for Bautista. What is your opinion?

“I honestly don't understand why and I think it's pointless. It makes me think of horse racing, where the jockeys don’t appear to be ballasted".