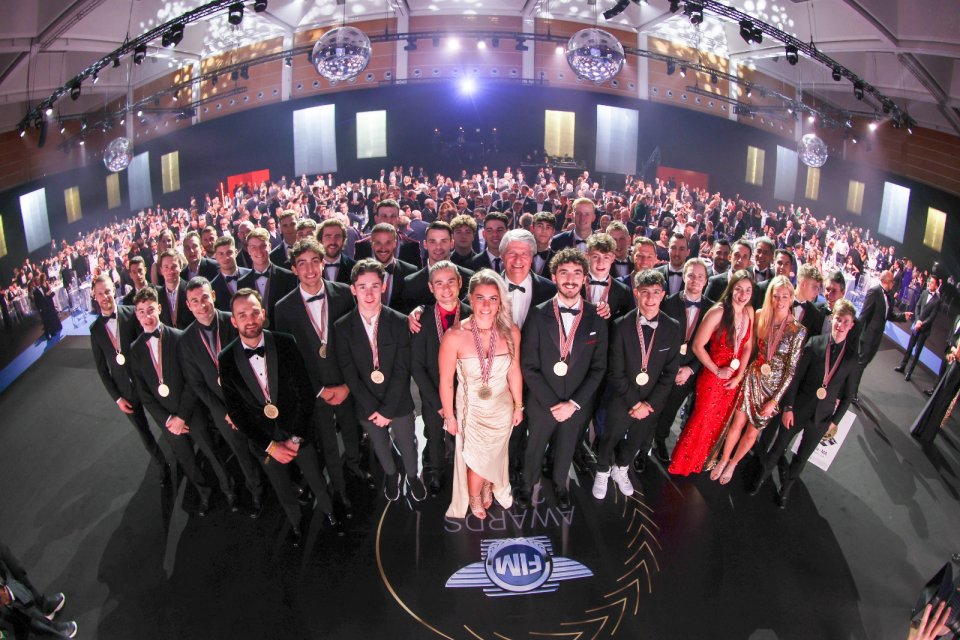 The striking Palacongressi Rimini – IEG Expo successfully delivered the 2022 FIM awards, with this being the first time that the venue had hosted this prestigious end of season ceremony. With a deep passion for motorcycling rooted in the region, the evening certainly lived up to expectations and matched previous editions hosted elsewhere, as the 2022 FIM World Champions were warmly applauded and honoured as each took to the splendid stage in front of the largest annual gathering of the FIM family headed by the newly re-elected FIM President Jorge Viegas.

With more than 800 hundred people congregated inside the impressive Italian venue, the audience was treated to a full evening of entertainment, with representatives from the one hundred and fifteen national federations, motorcycling legends, various members of the FIM, championship promoters, manufacturer and team representatives, sponsors and other invited international guests showing their appreciation throughout the proceedings.

Guests within the room and watching via the live stream were expertly guided through the night’s packed programme by the distinguished presenting quartet of James Toseland and Barbara Pedrotti for the second year running who were this time joined by Amy Reynolds and Matt Roberts. During the ceremony FIM World Champions representing all the six disciplines – Circuit Racing; Track Racing; Motocross; Enduro; Cross Country Rallies and Trial were invited to the stage to collect their respective hard earned and highly deserved gold medals.

Bagnaia spoke about his 'mentor' Valentino, who received a lifetime achievement award at Rimini: "I am happy to see Valentino extremely happy, this title was also thanks to him, and not a little. I am lucky to be able to share my life with Valentino often, I know I am lucky because I can ask him things that not everyone can ask him. He's a fantastic person, nobody will ever be like him.

After bringing the ceremony to a close the FIM President Jorge Viegas ended by saying: “Once again the FIM Awards has been a truly amazing moment for the entire motorcycling community, the FIM family and all our 2022 FIM World Champions. Rimini has proved itself to be a great host and has delivered a highly successful edition of this important event when it comes to promoting our magnificent sport to the wider World. Congratulations to our new and returning champions and everyone who has made tonight happen.”