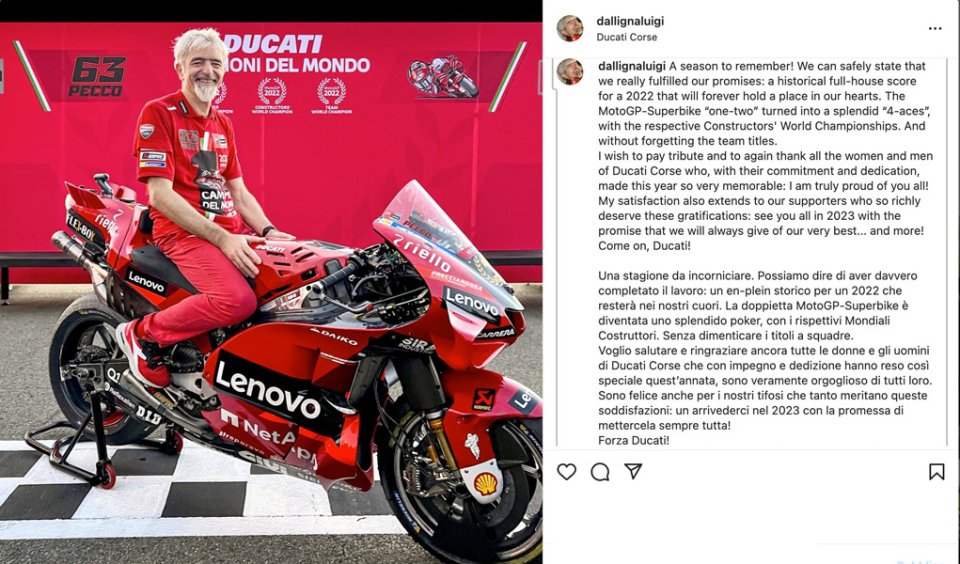 In 2022, Gigi Dall’Igna reached his maximum possible goal. The goal he had set for himself when he decided to move to Borgo Panigale. Ducati Corse’s General Manager has dominated both the MotoGP and SBK championships, winning the riders title with Pecco Bagnaia and Alvato Bautista, along with the constructors and teams titles.

An epic result, and one that was never achieved before by Ducati. We can definitely say that the engineer from Venice has hit the jackpot, not through luck but through  hard work. The Desmosedici and the Panigale V4 are his babies and have given him great satisfaction. He himself commented about it on Instagram this season.

“A picture-perfect season,” he wrote. “We can say that we’ve really completed the job. An epic en-plein for 2022 that’ll remain in our hearts. The MotoGP-Superbike double win was a great triumph, with their respective constructors championship, without leaving out the teams titles.”

“I want to again greet and thank all the women and men at Ducati Corse who, with commitment and dedication, have made this year so special, I’m very proud of all of them.”

“I’m also happy for our fans who deserve this satisfaction. See you all in 2023, with the promise to always give it our all! Let’s go, Ducati!”