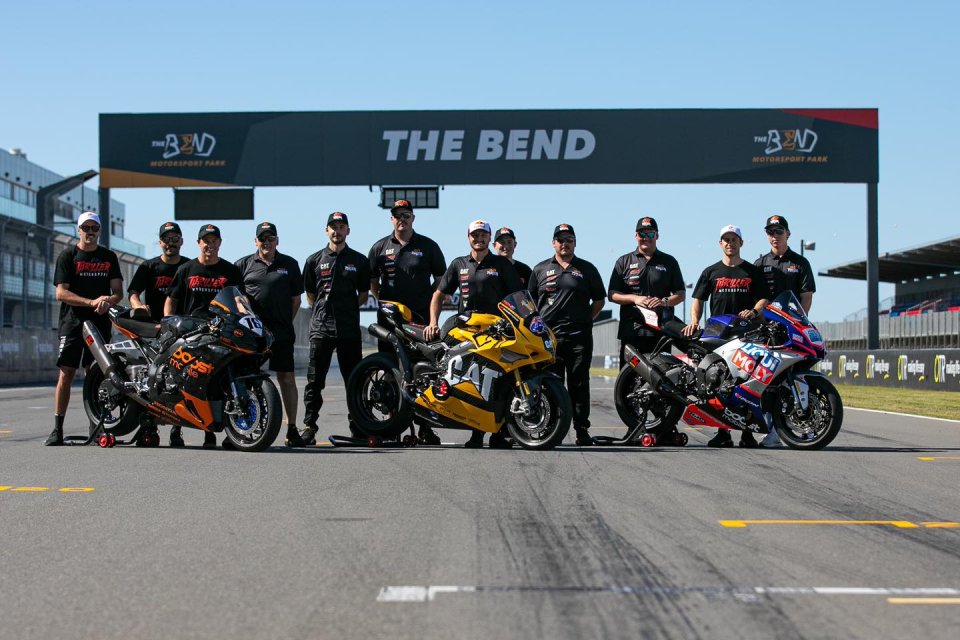 Jack Miller always knows how to astonish and would do anything for his passion.  That’s why he wasn’t happy just racing one round of the Australian SBK championship this time (as he had already done last year), but he also wanted to involve a couple of his friends and, while he was at it, create a team.

At The Bend this weekend, Thriller Motorsport will be making its official debut. A very special team, with three riders who all ride different bikes. “We needed a team. That was our goal,” Jack told mcnews.com.au. “I had created a merchandising company in Australia, Thriller Industries, so it’s a kind of spin off.”

Along with Miller, who will be riding a Ducati Panigale V4R, the other riders are Josh Hook (on a Honda CBR-RR) and Marcel Schrotter (on a Yamaha R1M). Three friends who want to have fun and who started this adventure with the right dose of free spiritedness. Suffice it to say that no one could test their bikes, because they were set up at the last minute.

“I wanted to, but I arrived too late and, last weekend, I had to go to a wedding,” Miller continued. “No motorcycle was ridden, except for Frank’s street one. My friend, who worked a lot on this project. The real challenge is not so much racing, but to prepare everything, to do everything as I like. We bought the trailer, the motorcycles, everything was arranged. It was nice to do everything alone.”

The three teammates are waiting to get on the track tomorrow.

“I’m just here to have fun. I have to say thanks to Jack who brought us here,” Schrotter said. “For me, it’ll only be a matter of knowing the bike and the circuit and then seeing what I can do. What’s my goal? Beating Hook, then we’ll see what I can do with Miller,” he said jokingly.

Josh said: “We’re here to have fun, but all the riders want to win. It doesn’t take a genius to figure it out,” he smiled.

Miller then spoke as team owner: “Team orders? Make sure Hook doesn’t do damage, because I’m the one paying for the bikes,” he said ironically.

So set your alarm clocks to 1:45 am Sunday morning to watch the race in streaming on the official website or on the ASBK Facebook page.

All this probably stems from the purchase of a van in Andorra a dealer says Hector never paid for.
6 days 8 hours ago