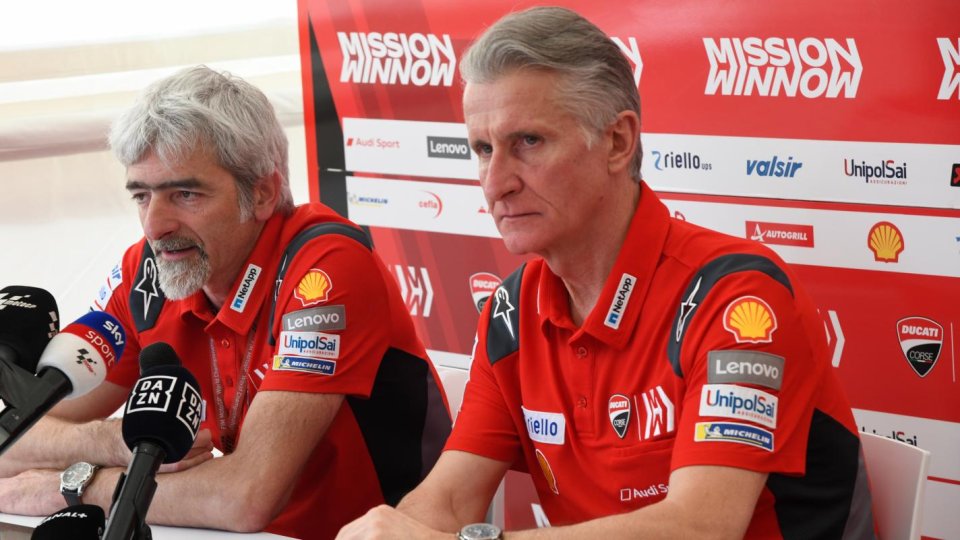 One of the men behind the relaunch of Ducati which eventually led to the conquest of the MotoGP title is without a shadow of doubt Paolo Ciabatti. His life can be considered to all intents and purposes as a sort of double life with the Borgo Panigale manufacturer, following his return after the experience accumulated with Infront in Superbike.

In this long chat we have looked back on some of the stages of his career, starting from his passion for cars and engines with many background anecdotes that have accompanied him during his life between two and four wheels. With his words, the Ducati sporting director reveals who Paolo Ciabatti really is, going beyond the traditional ritual declarations we are witness to during race weekends.

“On TV you can see me talking often, but actually I'm a very private person, who likes to stay behind the scenes – he began – obviously, in playing a role, you have to take responsibility and put your face forward when needed. Both when things go right and when they go wrong.”

From the outside you are a person with great self-control. Never a word out of place. Is that the case?

“I try to be a calm, serene person who doesn't like arguments. Obviously I get angry too, but then if you think about it, you realize that there's no point in arguing, because calm helps you reason and understand everything better".

Paolo, where does your passion for racing come from?

“There were two events that struck me a lot: the first was the death of Lorenzo Bandini in Montecarlo, the second instead the drama of Ignazio Giunti, who died at the 1000 km of Buenos Aires in 1971 after crashing into Jean-Pierre Beltoise's Matra. I wanted to understand more about those two events, so I got into the racing world. Then, from a purely passionate point of view, I certainly cannot forget the emotions associated with Giacomo Agostini's triumph at Daytona and at the Imola 200 miles”.

"Of course! First cross, then rallies. Rallying has been one of my greatest passions and it was wonderful to try this specialty. Among other things, I remember the trip to the Targa Florio, one of the symbolic races".

Over time you have always maintained a great admiration for aviation and the military world.

"Exactly. The thing is, I didn't do military service. Unfortunately, when I was doing cross with the cadets, I crashed and injured my foot, so much so that I was in hospital for three months. I had an iron foot and as a result was exempt from the draft. However, that world has always fascinated me, in fact I have tried to study it and explore it in history books, in particular the period between the First and Second World War".

Have you still tried to give your contribution to the police forces?

“More than a contribution, I was their desperation, a sort of nightmare. When we were in Tuscany, a friend of mine and I slipped into these tunnels in search of artifacts dating back to the war. We really found everything: bullets, devices, bombs and we took them to the Carabinieri. They were desperate, because they no longer knew what to do with us, since some of these were unexploded. Let's say there was a bit of healthy recklessness in me. As you have realized, I really admire the military world and I would also like to recall an experience".

“In the summer of 2013 I was in Afghanistan at the Herat Base, sharing the dynamics of life for almost ten days with our Armed Forces. There I really understood what their life was like, since I slept in a container with my camp bed, a shower, a toilet and a sink. I even got to go out of the Base under guard. It was an unforgettable experience, especially for the value that our soldiers represent in peacekeeping missions around the world".

How come you didn't become a politician or a minister?

“I sometimes wonder that as well (he jokes). I'll do it in the next life, I'll be a diplomat (smiles)”.

We haven't talked about Ducati yet. Now is a moment of joy, because the MotoGP and SBK titles are rightly to be celebrated. Ten years ago, however, the story was quite different.

“As you well know, I returned to Ducati in 2013 after the experience with Infront in Superbike. That was certainly the most complicated moment. I remember the drive from Aragon to Barcelona, ​​where inside me there was the awareness that we were about to hit a wall. We needed a sort of radical change, also because we didn't even know what kind of explanations I would give to the various media. We practically had our backs to the wall and I spoke about this with Domenicali”.

Dall'Igna's arrival proved to be fundamental.

"Of course. I still remember the Brno race in 2013, when I said to him: "Gigi, what are you waiting for to come to Ducati?" In the end he arrived, he gave a clear renewal and today we are all celebrating the triumphs in SBK and MotoGP together".

In this long career of yours in Red there have also been various negotiations. On-the-spot question: did you go looking for Marquez?

"No! Never seriously tried. We just sniffed around each other and nothing more. Instead, we went looking for Vinales, but he didn't want to".

What have been the most complicated negotiations in your adventure in Borgo Panigale?

“I'm sorry about Crutchlow's premature farewell to go to Honda, as well as the non-renewal of the contract with Iannone. Andrea received the renewal proposal before the accident with Dovizioso in Argentina, but there was no agreement and then he decided to go to Suzuki".

What will the Ducati of the future be like? Who will be the new Tardozzi and Ciabatti? Will Pirro be there as team manager?

“That's a good question! The years go by for me and Davide too and consequently we will have to lay the foundations for the future. In fact, we need to work in perspective with the aim of giving the best to Ducati, a company appreciated all over the world. The thing I can say is that I will continue to give all of myself to the Borgo Panigale manufacturer as long as they want my contribution. Then, in the future, as in all things, it is inevitable that there will be a turnover. Michele is a Ducati expert and I think that for now he wants to continue his career as a tester and rider in CIV without wanting to stop. In the future who knows ”

What will be the next challenge for Paolo Ciabatti?

“Breaking the sound barrier with the Eurofighter (jokes)”

One final consideration: we have not yet mentioned Bastianini and Bagnaia. Hopefully you won’t be offended if we avoid it for once?