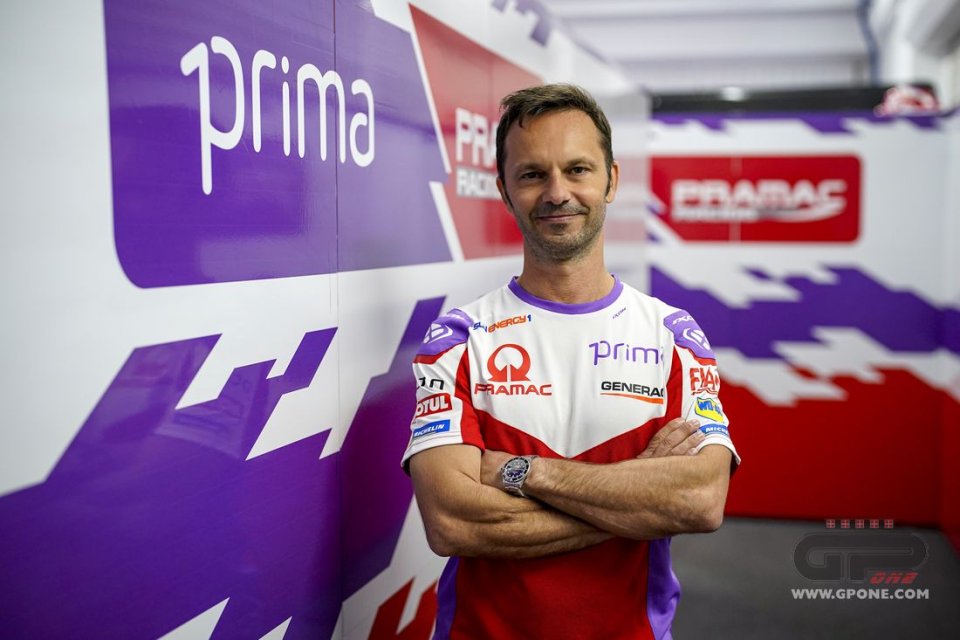 Gino Borsoi hardly even had the time to celebrate a great year with the Aspar team, which culminated in Guevara's Moto3 title. It was the last for him in the colours of the Spanish team, because on the Monday after the Valencia race he was already wearing those of Pramac Racing, and now he will head up Paolo Campinoti's team in the coming years.

It’s a big challenge, which Gino faces with optimism and his feet on the ground. Accepting it, however, was not easy.

“It was a difficult decision, I spent 17 incredible years with Aspar, so for me it meant leaving a family, because with Martinez our relationship is one of friendship even before work - says Borsoi - The motivation was to change, to try to manage a structure like that of Pramac in MotoGP, one of the best with two great riders and factory bikes. Furthermore, the team's close relationship with Ducati is an added value compared to that of other projects, not to mention that I have a special relationship with Dall'Igna, with whom I had already worked in the period of Aprilia".

"Aspar taught me never to give up, like when he was a rider"

What lesson do you bring to Pramac from Aspar?

“The fundamental one was to never give up. Martinez, even in difficult moments, was positive and calm, with the awareness of being able to make it even in critical moments in which many would have decided to give up. We've gone through economic difficulties in the past, it was tough, but Aspar made me understand that when you have the will to fight for your projects and dedicate all of yourself, you can get out of those moments".

Is it an attitude that comes from having been a rider?

“Yes, it was a bit like when Aspar raced in the 125 with the Yamaha: he had a decidedly inferior bike to the others, but he braked later, accelerated earlier and managed to fight with the best. He did the same as a manager, he always honoured his contracts and dealt with every problem ”.

"I'm a rookie with Pramac, but I know I have a great team and Ducati behind me"

At Valencia, during the tests, you wore Pramac gear for the first time: what was your first impression of the team?

“It was a rookie test, it was the first time I had left my environment and it was like starting from scratch. I didn't know the structure, the people, I had never entered the garage before, but I have to thank Claudio Calabresi, my predecessor, a lot, because he made my job a lot easier. Honestly, at first I thought that test would just be a pain in the ass (laughs) because I felt like celebrating with the guys from the Aspar team. Instead, I managed to do both, and that day in Jerez was useful. I was able to figure out where to start working to start preparing for next year, as a rookie I hope I did well (laughs). I was well received and it was easy for me to join the squad".

Pramac is an important team for Ducati, both for the growth of young riders and for the development of the bike. Is it a big responsibility to be in charge?

“This is one of the reasons why I decided to accept the offer. Pramac is very important for Ducati and next year it will be the only team to have factory bikes in addition to the internal team. I know I have an important structure behind me and the support of Ducati, it's a team that has every chance of continuing to be one of the best in MotoGP".

"I believe in Zarco and Martin, with them we will be able to bother many others"

What do you expect from next season?

“I consider both Zarco and Martin two great riders. Johann showed he can stay at the front, Jorge is a great talent and they could be two outsiders. I think they can both fight for the podium, the World Championship is a different matter, because you have to deal with the factory teams. Fighting with them won't be easy, but with these two riders I'm convinced that, if we do our job well, we'll be able to bother more than one ".

There is already a small piece of Aspar in Ducati, because the first people to put Bagnaia on a Ducati were you and Martinez for that prize test at the end of 2016.

“I am very, very, very happy that Pecco won the World Championship and especially with Ducati, I have a good friendship with Dall'Igna, Ciabatti and Tardozzi. In Moto3 Pecco had restarted with us, starting to show who he really was with a bike that was decidedly inferior to the others. He restarted with the Aspar team and with Ducati he touched the sky".

“I'll definitely try, I don't know if I'll succeed because doing damage takes a moment (laughs). My objective is at least to maintain the standards of the Pramac team".

"I'll also be a talent scout for Ducati. Guevara will arrive in MotoGP, he has enormous potential"

In all these years in the Aspar team you have always had to handle very young riders, the last one was Guevara. Do you see him in Ducati?

“Logically, I know the riders of the Aspar structure well and my opinion of Izan is certainly positive. Not just because he won the Moto3 title this year, but because he has a style and potential that I think is enormous. I am convinced that he will arrive at MotoGP, but he is linked to GasGas and I can imagine that they will keep him close".

Would you still like to have a talent scout role within Ducati?

“I can’t deny that we have already talked about it. Having worked for Aspar not only in Moto3 and Moto2, but also in the European Talent Cup and Junior GP, I also have a broad view on the smaller championships, something that the MotoGP teams sometimes lack. It has been my daily plan and I have some ideas on who the future MotoGP riders could be".

Can you tell us?

THE 2023 CALENDAR MotoAmerica, the American series, will have to do without Danilo Petrucci this year, who has decided to continue his career in...
12 hours 23 min ago

THE 2023 CALENDAR The Suzuka 8 Hours, valid for the FIM World Endurance Championship, will take place in 2023 one week later than originally planned...
1 day 20 hours ago

The FS-3 Racing Kawasaki team continues to focus on young riders in the British Superbike. With Rory Skinner in the Moto2 World Championship, 19-year...
2 days 6 hours ago

His wife posted about his condition: “He is okay and in the best place possible. They will keep him in for a few days to monitor him.”
2 days 16 hours ago